Ranking up there in the top five favorite inside or outside games, at least with my students, is Capture the Flag.  Strategy, speed, and quick thinking on your feet contribute to one team being victorious over another.  Some team members enjoy guarding the flag, tagging those who would try to steal it.  Others relish the opportunity to sneak in, grab it and spirit away undetected, well, at least for awhile. 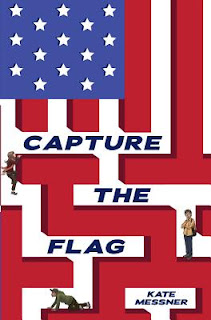 In her first book of a new series, author, Kate Messner has expanded the boundaries of the intended playing field.  Beginning in the Smithsonian Museum of American History, then to the Washington DC airport and eventually to the state of Vermont, Capture the Flag (Scholastic) is no game.  This high stakes heist has the nation's capital under high alert.

They never should have unlocked the door.

That first line is like the finger needed to gently push, setting a domino effect in motion.  As a gala event to celebrate the restoration of the flag which inspired Francis Scott Key to write The Star Spangled Banner is drawing to a close, one final group of dignitaries is taken to see this artifact.  Three seventh grade students, although strangers, are seated together on a bench close to Washington's statue, waiting for busy adults to complete their parts in the evening's activities.  Little do this girl and the two guys know, their lives are about to be connected in more ones than one.

Anna Revere-Hobbs, daughter of a TV news anchor and United States senator, had hoped to get more of a scoop for her Vermont school newspaper.  Proud of the work his mother, a textile scientist, has done on the flag, Jose McGilligan nevertheless goes back to reading his well-loved copy of Harry Potter and the Goblet of Fire anticipating the evening's end.  Having to spend time with his Aunt Lucinda while his dad is on his honeymoon with his new stepmother is not game-playing Henry Thorn's idea of a good time.

Later while these three and the rest of the evening's attendees are soundly sleeping, a hidden figure in the flag's chamber methodically folds the aged fabric, places it in a case and walks away with no one the wiser.  As circumstances would have it, the three meet again at the Washington DC airport the next morning, stranded, as are many, due to a freak snowstorm.  It is with shock they and others there hear the news of the flag's disappearance.

In short order Anna's nose for news and observations skills, piece together two important points.  The three of them have close family who are members of a secret society pledged to protect priceless world antiquities.  Second, and most critical, the stolen flag and the thieves are likely stuck in the airport too.

As the trio join forces, each with their unique skills, clues start to pile up as quickly as the snow falling outside.  Innocent people are being held as suspects, a man with a snake tattoo is stalking a presidential candidate, and their new young friend, Sinan, has disappeared.  Determination and a need to help those in trouble lead them into an off-limits arena; a room of conveyor belts, high ceilings and thousands of pieces of luggage and bags.

Nearly frantic, trying not to panic, each of them summon all their courage to do what they believe is right.  Time is not their friend nor are those who will do anything to keep their plot from being exposed.  A dangerous game of cat and mouse ensues with the outcome for our characters held in a tenuous balance as they literally speed to the conclusion.


Kate Messner's talent as a writer is her ability to hook readers with an intricately developed plot, peopled with likable characters of varying personalities and backgrounds and despicable villains, non-stop adventure, intriguing bits of history, and set among places of interest.  Each chapter ends with a sentence, thought or statement that moves readers eagerly into the next chapter.  Her descriptions of the minute by minute action are downright nail-biters.

Between her characters the dialogue is completely realistic, evoking an emotional response in the reader.  As the action progresses more of her characters' traits are revealed.  We readers get to see what really makes them tick depending on the situation.

Here are a couple sample passages.

The man counted to one thousand.  One thousand shallow breaths from behind the table.  His knees creaked when he finally stood.
He stepped forward and slipped one hand under the edge of the table until he felt the first cold metal clamp that secured the flag, on its protective backing, to the display table.
Slowly, he turned the clamp until he felt its cool weight drop into his palm.

"My responsibility is to knock out these bank robbers." Henry picked up his SuperGamePrism-5000 again. "Otherwise, I can't get to Level Ten."
Jose looked at Henry, poking at his GamePrism, and shook his head at Anna. "Sorry, I can't believe I'm saying this, but I think I agree with him." He took out his book.
Anna threw her hands in the air. "You are such...boys! What is wrong with you? You spend your whole lives looking for excitement in video games and movies and books, and then when something big finally happens, you're too busy reading and poking at some SuperGameThingy to do the real, live, exciting thing right there in front of you!"


Kate Messner's Capture the Flag captures the reader's attention on page one weaving, twisting, turning and racing toward the final sentence; a sentence filled with the assurance of more excitement to come.  The second book in the Silver Jaguar Society series is slated for publication in the spring of 2013 bearing the title, Hide and Seek.  Raise your hand if you can hardly wait!


The link embedded in Kate Messner's name above takes you to her website.  This link is to her author interview about this title.  At the Scholastic web site is a link to the accompanying teaching and discussion guide.  Kate Messner has provided a Pinterest board for Capture the Flag linked here.  This final link is to the Smithsonian website for The Star Spangled Banner.
Posted by Xena's Mom at 5:50 AM