If Not For The Dogs

There is no sense of peace or security that can compare with the presence of a dog.  To feel their nose nudge your hand, to have them pause on a daily walk to listen or smell, to hear their soft doggy snores, to watch their legs move in their running dreams or to have them lie down next to you, their body curving in comfort and protection, is as if heaven has come down to Earth.  Always companions but more times than one can imagine, they are our rescuers. 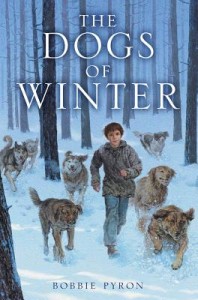 This past summer I discovered an author truly gifted in her ability to capture the essence of the relationship between humans and dogs when I read A Dog's Way Home (Katherine Tegen Books, 2011) by Bobbie Pyron.  I could hardly wait for the publication of her latest title, The Dogs of Winter (Arthur A. Levine Books) based upon the true story of Ivan Mishukov, a homeless boy who lived alone for several years with a pack of dogs on the streets of Moscow.  A single newspaper article read in 2005 compelled Pyron to spend years and years of research and writing to bring this story to readers.


The first chapter, a single page, is a reflection by an older Ivan.  It closes with the following sentence.

My dreams begin and end with the dogs.

Ivan's story starts with him, his mother and grandmother, Babushka Ina, living in a small apartment in Ruza.  For him this life is stable, secure, closing each day with fairy tales read to him from a cherished book.  The sudden death of his Babushka Ina brings about devastating change.

Unable to cope with her grief, his mother begins a downward spiral, forgetting to care properly for her son, losing her job and bringing an abusive man into their home.  One evening, having been relegated to the pantry, the sounds of a physical fight are heard, thuds, crashes and a moan, through the door. The next day Ivan is told by this man, his mother is simply gone.

Stunned by this turn of events the boy searches for any signs of his mother's probable return, not believing she would leave him.  What he discovers is a single button from her coat and a smear of red next to it.  Taking a train to Moscow, Ivan hopes they are going to find his mother but instead he is to be taken to an orphanage.

Thinking he hears his mother's voice urging him to run, he does, avoiding that particular nightmare.  Escaping to the railway station Ivan ends up living with a group of hardened, streetwise homeless children.  As weeks pass he no longer looks for his mother's red coat in the crowds.  He starts to watch the dogs.

A single dog, named Lucky by Ivan, leads him to a pack of six others. (All given names by Ivan.)  These dogs become Ivan's family, each depending on the other for survival.  From the streets, to abandoned buildings, riding the trains and sheltering in the forest, at the mercy of the seasons and weather, they eke out an existence.  There are more who would do them harm than those who wish to help.

The dogs protect Ivan from homeless gangs of older children, the ever present danger of ruthless police, other wild dogs and creatures in the woods as he looks to their safety and care as best as a small child can.  The threat of starvation and the bone-chilling cold stalk them relentlessly.  As one year blends into another, Ivan becomes more dog than boy.

Despite his becoming a part of the pack, it's his need for human contact that ultimately causes him nearly unbearable pain.  Once invisible he has now become hunted. For readers the tension of him and the dogs living from one day to the next is replaced with heart pounding fear and heart-wrenching consequences.


Bobbie Pyron's descriptions of life in Russia during this time period are so finely wrought your senses are awakened to every nuance of Ivan's life with these dogs.  We are in his mind watching him change from an innocent child on his own, thrust into horrific circumstances, to a valued member of a canine family.  Their plight and fight become ours.

She divides the story into two parts with chapters numbered to fifty-three creating for readers the many moments in their days, making it more intimate.  Her technique of ending a segment or chapter with a telling sentence or remark propels the tale forward with an increasing intensity.  Nothing is spared in her gritty revelations of the truth for hundreds of thousands of children living on the streets.

Here are several passages from The Dogs of Winter.

On a hard day, a bitter cold day, I sat huddled next to a steam grate in the sidewalk.  The cold made my eyes stream tears.  I told myself they were not tears for my mother.  They were not tears for the weeks it had been since I had slept in a bed or taken a bath.  Perhaps it had been months or only days.  I didn't know or care anymore.  The tears were only for the cold.  I bowed my head and rested it on my knees.
Something warm pressed against me. Warm breath stroked my cheek.  I lifted my head.  There beside me stood a large brown and black dog.

I gasped.  There, at the bottom of the bag, glowing like the sun setting in the winter sky, was an orange.
I held the orange under my nose and drank in the wonderful smell of its orangeness.  "Oh, he must be a very rich man," I said to the dogs.  They sniffed the orange and turned back to their bread.  I smiled.  The orange would be just for me.  I had eaten an orange only once or twice in my life.  This one, I would make last for many days.


There are those books that hook you from the very first page, taking you into a world you have never known, leaving you with a greater understanding of what others have endured.  The Dogs of Winter by Bobbie Pyron is one of those books.  It is a one of a kind title which will leave no reader unaffected.  Unforgettable.

Please follow this link for an outstanding interview of Bobbie Pyron.