In The Midnight Hour

In your imagination there are no limits.  You can be anyone, do anything, or go anywhere anytime for no reason whatsoever.  Under the cover of darkness the magic of the mind doubles its powers. 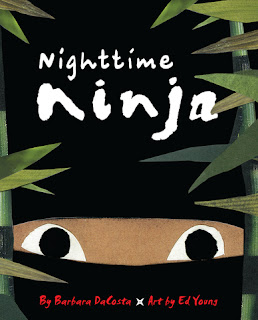 In many a story when the clock strikes twelve, what is impossible in the daylight hours can now be attempted with confidence.  It goes without saying, when one assumes an alternate identity, it is done with the knowledge that success is pretty much guaranteed.  First time picture book author, Barbara DaCosta, has written Nighttime Ninja (Little, Brown and Company) with illustrations by Caldecott Medal winner, Ed Young, inviting readers into possibilities.

Those four beginning words have the same lure as--Once upon a time...  Already your mind is wondering where, what or who will happen next.  A kind of tension, suspense, has been created.

A ninja, silent as a breath of air, is moving along a rope suspended from one building to another.  Climbing and leaping this native of the night makes a sure-footed landing. Moving into the house, a determination is made.  The family is sleeping.

Weaving along the hallway guided by the moon, listening, he pauses.  In his hands are the tools of his trade.  Then, without warning, the room is flooded with light.  It would seem that even the skills of a ninja are no match for those of a mother.


Having engaged readers from line one, Barbara DaCosta leads us into the story laden with anticipation.  Spare but descriptive text carries us from one moment to the next.  We are with the ninja on his mission, every step of the way.

When the surprise comes balance shifts from dark to light, uncertainty to disclosure with a knowing chuckle escaping easily.  DaCosta has composed a tale moving quietly but cleverly from ninja to boy in a heartbeat. The final dialogue between mother and child are typical then tender.  Who could ask for more?

Step by step he balanced and leapt.


Oh, to sit as still as stone, watching Ed Young work his wonders in his studio, would be a dream come true.  How he fashions his illustrations from cut paper, textured cloth, string and colored pencil, into the beauty we see in this book, is a marvelous mystery; I am in awe.  I could feel a big grin spread across my face when I discovered that the jacket and cover were different; the first eyes peering through the mask in bamboo, the other a close-up of the entire face vertically across the front and back.  A soft black background highlights small ninja figures in various positions moving along a rope on both the front and back endpapers.

After the first two pages with the introductory line, readers are treated to four wordless pages continuing the storyline, creating a bridge to the next narrative text.  Colors throughout are deep, dark and rich, radiating all that is night as well as the culture in which the story is set.  The moon plays a prominent place in several pictures; one in particular is stunning as the silhouette of the ninja crosses its face.

A deep purple widely frames nearly all the illustrations but small portions of the ninja's body extends into those frames adding to the feel of movement.  The paper and fabric choices add depth and texture causing the reader to want to reach out and touch many of the pages.  In fact, the bamboo stalks and leaves on the front cover are raised and rough to the touch.


The collaboration of debut author, Barbara DaCosta, with award-winning illustrator, Ed Young, places Nighttime Ninja on my list of favorite books of 2012.  I can easily see this as a family bedtime favorite or another wonderful addition to titles in an Ed Young author/illustrator study. Readers will be hooked on page one with text and pictures and will sigh when the cover is closed.  Don't be surprised to hear a whispered, "Read it again."