A Gift For Christmas

Between the first day of school and the last, there's one section in the library that's guaranteed to usually be empty. Once in awhile a book will make its way to the shelves but only until the next class arrives to quickly check it out again.  In the last six plus years this particular Dewey designation has grown significantly in numbers and popularity. 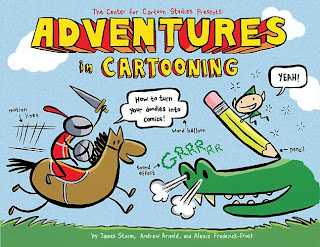 It was a week before Christmas and Santa was grumbling... 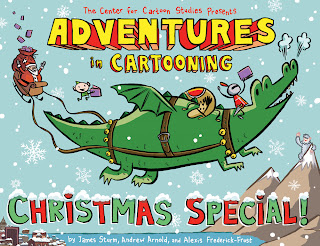 Call me old-fashioned, but traditions are crumbling!

Santa's in a tizzy.  What happened to the good ole' days?  It seems that all his elves do is write code for the electronic games and toys delivered to all good little girls and boys.  But he gets an idea.  He's sure it will do.  Now all he needs is...Whoosh...The Magical Cartooning Elf!

Before the man of legend and lore, dressed in red from head to toe, has a chance to appreciate his good fortune, the marvelous magical little guy in green conjures up his friend, the brave knight, to help with their plan of creating the perfect gift, a comic book. The knight is needed, of course, to supply all the gripping action from her deeds of derring-do. Hesitant at first, she relents, owing Santa for all the good he does each year.

A climb to Mount Everest, sharing a sub with a Yeti, sobbing children in the land of giants and...a trip to space to lasso a star certainly fit the bill.  Amid all the preparations for publication a problem becomes abundantly clear.  Edward, the knight's trusty steed, has a bit of a weight problem, so he is not the answer.

The trio plus one have a quest to complete.  Will the books be delivered by Christmas morning?  Will gals and guys around the world delight in this newest non-digital present?  And what do an onion and a big toe have to do with any of this at all?


Bringing characters from the first volume, the Magic Cartooning Elf, the brave knight, Edward the horse and the candy-hoarding dragon, to this narrative is a stroke of genius.  The dialogue is loaded with quick comebacks, emotional outbursts, hilarity times ten and Santa's musings.  Told entirely in rhyme (which drives the knight nuts), the story flows at a joyful clip.


The inside of the paperback covers displays snowflakes.  On the first page a snowman built by one of the giant children is centered beneath the title, authors'/illustrators' names in the middle. As they did in the first book nine pages of the storyline pass before a vibrant two-page title is presented; decorated in Christmas lights, snowflakes, stockings and special font.  This title page is part of the narrative.

Throughout full color panels in varying sizes are positioned appropriately enhancing the pace of the tale.  Word balloons, lines of motion and sound effects are as exuberant as the story itself inviting the reader to participate.  Each reading reveals new details, intricate and humorous.


James Sturm, Andrew Arnold and Alexis Frederick-Frost are a trio, tried and true, who bring readers Adventures in Cartooning: Christmas Special! , another comic creation filled with laugh-out-loud wit and wisdom.  For an individual to enjoy or as a read aloud this title is a treat.  Be sure to have plenty of paper, pencils, and pens handy.  For more illustrations to preview follow the link directly above embedded in the title.