In the animal kingdom there is no lack of unusual friendships.  After a tsunami struck in December of 2004, a rescued baby hippo was placed in Haller Park, Kenya where he quickly sought out the company of an 130-year-old tortoise. Owen and Mzee were inseparable for more than three years.   At the Elephant Sanctuary in Tennessee a stray dog wandered onto the 2,000 acre property.  For more than a decade until her untimely death, Bella and Tara, an elephant, were fast friends. 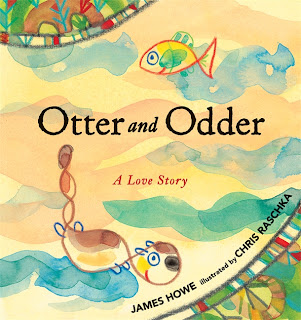 Even more unexpected is the bonding of animals who are part of each others food chain.  Acclaimed author James Howe has penned a tender tale, Otter and Odder: A Love Story (Candlewick), of a curious attachment formed by an otter and a fish.  Caldecott Medalist, Chris Raschka provides luminous illustrations for the title.

As with many living beings love happens when it is least expected; certainly not when one is looking for their next meal.  But to Otter's utter surprise staring into those starry eyes, he knew something out of the ordinary had happened.  He asked her (he hoped it was a girl) name.

Gurgling a reply (after all they were under water) Otter heard Myrtle, a fitting name for such a lovely fish.  Her only thought was of gaining freedom from his firm hold on her scaly body.  But looking deeply into his eyes, Myrtle was overcome with an emotion new to her, love.  How could this be?

Oh, the joy of finding such a companion.  Swimming, playing, storytelling, feeling the sun shining on them and star watching filled their days and nights.  Together they felt whole.

As is the way of the world such a relationship raised a ruckus with the river folk.  The talk began and escalated until the seed of self-doubt was planted and well tended.  Otter and Myrtle knew the way of the otter would only end badly for her and her kind.

The tone of the chit-chat changed as everyone but Otter felt good about his abandonment of such a ridiculous affection. Just as he had not been looking for love, Otter did not know he was looking for wisdom.  But it found him.  Would wisdom find Myrtle too?


There is a simple, poignant beauty to the use of language by James Howe in this story moving us along like the current on the river where his characters reside.  He captures us as love captured Otter, swift and sure, and we are glad, no eager, to see and experience every high and low this flow presents to us.  His words are like a breeze through the reeds, water tumbling over rocks, or a sudden splash.  Here is a single passage.

But then in his eyes
she saw the sparkling river reflected
and a tender and lonely heart revealed.


How is it that the seemingly childlike illustrations by Chris Raschka glow with the sophistication of a master?  Every line, every subtle shade of color, every brush stroke is full of purpose and...magic.  Watercolor and pencil in his hands fashion a soft, inviting warmth.

The jacket, cover, opening and closing endpapers, title, publication and dedication pages introduce readers to the watery wonderland and its occupants.  Two-page spreads bleeding to the edges, single pages framed in white and a final two-page spread framed in white enhance the pace of the narrative.  Eyes and mouths convey every shift in emotion.  Design and layout beckon to the reader at each turn of page.


Otter and Odder: A Love Story written by James Howe with illustrations by Chris Raschka is a story to be read and read again.  The melding of words and art is full of heart with the feel of a classic.  I love this book as much as Otter and Myrtle love each other; more than anything else or despite what anyone says.

This is a link to the publisher's website with a picture of the first page. (Click on view an inside spread.)  By following this link you can read James Howe's Author's Note.  It's well worth your time to read it.