It's fascinating to see a familiar folktale or song rendered by an illustrator, lending their unique style to the interpretation visually as well as giving the narration, at times, their own personal slant.  Many choose to follow the original text closely, others create a variant or fractured version.  I have been reading and collecting the collaborative works of Caldecott Honor (One Wide River to Cross, 1967) and Caldecott Medal (Drummer Hoff, 1968) winner, Ed Emberley, and his daughter Rebecca Emberley since 2009 with the release of Chicken Little. 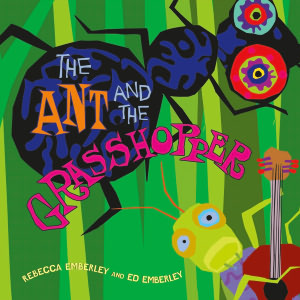 Together they have brought readers their own special twist on There Was An Old Monster! (There Was An Old Lady), If You're A Monster And You Know It (If You're Happy And You Know It), The Red Hen, Ten Little Beasties and most recently, The Ant and the Grasshopper (Roaring Brook Press).  With this title they continue to enlighten and delight readers by staying true to the original characters but altering the setting as well as the outcome.  I would like to believe Aesop would not only approve but be humming and toe-tapping by the tale's end.

Somewhere on the boulevard of backyards an ant was struggling with the remnants of a picnic.

Exhausted the little insect is sure she cannot move through the grassy forest one more micrometer.  Wishing for the slightest whiff of air to cool her on this sizzling, muggy day, what should she hear but the sounds of a melody.  It wasn't easy to pick up her culinary treasure but the lure of the tune was too much for her to ignore.

Right out in the middle of nowhere is a grasshopper and his musician friends playing as if they don't have a care in the world; which is probably quite true.  What does the little ant make of all this groovy fanfare?  Moving to the beat her burden and mood lighten.

Declining their invitation to stay, she starts on her way home.  Grasshopper and crew know what to do. More than willing to return one kindness for another her offer is accepted enthusiastically.  Let's party bug buddies!


Rebecca Emberley and Ed Emberley have written the dedication to this book as follows:

For the people of New Orleans, with whom we have fallen in love.

The cadence of the text is a reflection of the people and music from this historic region.  It's subtle beat is formed with alliterative combos, descriptive details in word choice and a smooth delivery.  Whether reading this aloud or to yourself it's like singing joyful, jazzy, lovely lyrics.


The cool, deep spring green endpapers beckon and bid farewell to readers.  Bright, bold cut-paper collages create a colorful cast of insect characters set within the varied hues of tall green grasses.  Buggy instruments while resembling their human counterparts are as vivid as the individuals playing them.

All of the illustrations span across two pages except for the last.  Readers are taken down to an insect's view of the world, zooming in and out, corresponding with the text.  These visuals are so full of life readers will be wondering, waiting and wandering to see what they can see when next the grass grows tall.


Rebecca Emberley and Ed Emberley, a daughter and father team, blend words and text to create a marvelous, musical retelling of The Ant and the Grasshopper.  The narrative will lift you up and the illustrations will have you reaching for the nearest cache of colored paper and scissors to fashion your own jiving critters.  For an inside peak on how this partnership began follow this link to The Sky Is Falling:  In Interview With Rebecca and Ed Emberley at School Library Journal.