So Says The Top Dog

Sometimes according to a plan but sometimes quite unexpectedly, they come into our lives.  They speak one language, we another.  We read everything we can to bridge the communication gap, they read nothing.  The best points (or those that work) from what we've read, we remember, not really understanding why one is better than another. 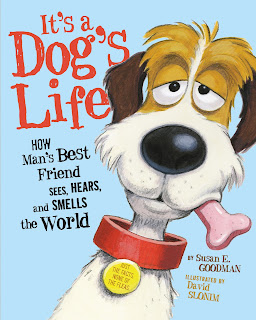 Even after more than twelve years, spending every day but a handful with my chocolate lab, there are still moments beyond my human comprehension.  But...there are facts to be heard, truths to be shared, straight from the mouth of one marvelous mutt.  It's a Dog's Life:  How Man's Best Friend Sees, Hears, and Smells the World (Flash Point, an imprint of Roaring Brook Press) as written by Susan E. Goodman with illustrations by David Slonim tells it like it is.

Pssst, kid! Over here!
Do you like dogs? Sure you do.  We're man's best friend, right?
But how many of your other best friends lick your face? Lick themselves? Or roll in dead animals?

So begins the inside story on some of the more closely guarded secrets of the dog world.  Back in the day when caves were humans' cozy abodes, dogs decided the free food tossed their way was much easier than chasing down something wild.  They were absolutely content to bark away any would be challengers.  It was a win-win partnership.

As civilization expanded so did the duties expected of these four-footed friends.  Humans mixed and matched dogs enhancing one characteristic over another.  Over hundreds of years the number of breeds grew as did the canines of no particular breed at all.

Dogs' sense of hearing, seeing and smelling is well suited to their place in the animal kingdom making them appear extraordinary compared to us, which in many respects they are.  Who knew that bat sounds we cannot hear sound like jackhammers to them or their limited color spectrum is due to a past of hunting at dawn and dusk?  When is comes to the slightest movement, any change in the immediate scenery, they know...always.

As to the nose knowing, dogs are at the top of the heap. Every single scent is code to them with their smell cells numbering 44 million times more than ours.  Whew!  That really ups the phew factor.

Barks, growls and tail wags each give clues to the careful observer. Whether it's needing a leader of the pack, eating standing up, tasting or rolling in yucky stuff or enjoying a breezy ride in the car, it's all for a utterly understandable reason...if you're a dog.  Unlike some of their human counterparts a dog is never too old to learn new tricks.


If a dog could and would take the time to talk with you one-on-one about the ins and outs of their history, how they see, hear, smell, taste or convey moods and messages, then author Susan E. Goodman has the lingo pegged perfectly.  Facts are woven into the conversation in a confiding tone as if your best bud decided to let you in on the scoop of the century.  Humorous undertones add tail-waggin' goodness to the straightforward, no-nonsense delivery.

Here is a single passage.

As far as noses are concerned, yours stink--compared to ours, that is.
No wonder you're always looking for your sneakers instead of just smelling
them under your bed. Or asking, "Have you seen my lunchbox?" Believe
me, we know where that is.


Illustrator David Slonim begins lending his own special brand of hilarity to this book on the jacket and covers with detailed, added wit such as the tag on the dog's collar reading, JUST THE FACTS, NONE OF THE FLEAS on the front and with the final sentence in the letter to Dear Human...Whatever you do, don't show it to the cat. on the back.  Who can resist the goofy expression of the main mutt, Joe, narrating?  In fact the expressions on all the dogs and characters throughout, are funnier than funny.

The text is further enriched with his speech bubbles and thought balloons; a chihuahua poised on top of a crawling baby nose down to the diaper thinking, How about that? She's started to eat onions!  Varied image size and placement add to the upbeat rhythm of the facts.  It's his interpretations of a single sentence or passage that will have readers bursting out in laughter.


It's a Dog's Life: How Man's Best Friend Sees, Hears, and Smells the World is essential reading for dog lover's but can be enjoyed by any reader for the interesting presentation of facts through author Susan E. Goodman's special brand of writing and the comic illustrations of David Slonim.  After Joe, the mutt, completes his portion there are four pages devoted to a human point of view.  Goodman follows with an explanation of the spark that prompted this title including a bibliography of her favorite books on this topic.