The use of language, the formation of words, in storytelling and how we use them, written or spoken, almost has a magical quality to it.  When you think how they can make you feel, where you can go or how attached you become to characters, real or fictional, it's astounding. This is one of the reasons I have been captivated by and motivated to collect alphabet books over the years. 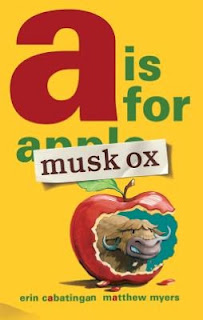 Textual presentations, storylines, coupled with the pictorial interpretations are as unique as the authors and illustrators themselves.  My fifty plus collection has recently grown by another title, A Is For Musk Ox ( A Neal Porter Book, Roaring Brook Press, October 16, 2012) by debut author, Erin Cabatingan with illustrations by Matthew Myers.  It would seem that Musk Ox wants to give this volume his own special twist.

Hey!
Hey you,
Musk Ox!
Did you do this?
Did you eat
that apple?

Pieces of apple, a discarded core, lying about his feet, apple juice dripping from his mouth, Musk Ox is confronted by a perturbed Zebra.  Finally admitting his guilt, he tells the disgruntled Zebra that on the contrary, the book is not ruined but saved.  In fact he has the perfect solution, "a" should be for musk ox.

Of course, Zebra believes this suggestion to be ridiculous.  Musk ox does not start with "a".  In fact, there is no "a" anywhere in those two words.  Ever persistent, ever persuasive Musk Ox has the perfect answer, a musk ox is awesome, lives in the Arctic where some of the state of Alaska is located.

Zebra relents moving on to the letter "b".  Musk Ox wants that too, claiming musk oxen fur is brown and black.  Completely disgusted at this point, Zebra says he can have "b" and "c" as well.  For Musk Ox, that is like waving a red flag at a bull; it's full steam ahead.

When there is not an actual fact to fit a letter, Musk Ox continues to enumerate his many and wonderful attributes, at least in his opinion.  Lest you think, it's smooth sailing all the way to "z" for this hooved, horned herbivore, think again.  Letters "k", "l" and "m" result in some rather testy back and forth discussions between the two characters.

To be perfectly clear not every letter representation is replaced with musk ox.  He does have some alternatives which he justifies using his own personal brand of logic.  When Musk Ox finally arrives at "z", he and Zebra finally agree but to the delight of the former and the total humiliation of the latter.  Why is Zebra chasing Musk Ox?


Told entirely in conversations between Zebra and Musk Ox, with Musk Ox taking center stage for many of the letters, Erin Cabatingan gives her characters personality with a punch.  These two don't mince words (or thoughts) having discussions loaded with attitude.  It's a game of one-upmanship in the world of alphabet.  Here is a sample passage.

U is for musk ox
Because musk oxen
have underwool!

You said that already.


When looking at the front cover, the first thing you notice is the cutout, the bite out of the apple, framing Musk Ox with Zebra standing, hands on hips, looking at that strip of words glued over apple.  On the back cover is Zebra's own alliterative views glued over A Is For Musk Ox because...are annoying, and always about as aggravating....  Matthew Myers colorful visuals rendered in oils on illustration board are full of expressive spunk and your-stomach-will-hurt-from-laughing-so-much humor.

A variety of pale backgrounds showcase his characters and their faces as does the changes in perspective and zooming in for close-ups.  Depending on the letter and conversation his backgrounds might mirror the narrative; bookcases in a library, snowy Arctic abode of Musk Ox complete with a recliner and television set with rabbit ears.  The excluded word is shown somewhere in the overall illustration; clown shivering outside the window of Musk Ox's home, a shattered lamp, a tiny green turtle in the snow.  Myers chooses to use a single page, half page or even a double-page spread to focus on a letter adding to the flow, creating a sense of movement.


If you're looking for an upbeat, snappy alphabet book packed with hilarity, A Is For Musk Ox written by Erin Cabatingan with paintings by Matthew Myers is a sure bet.  Reading it aloud with a voice brimming with expression, will have listeners laughing like crazy.  I can also see this working well as a reader's theater title.