As a parent with young children or an educator working with elementary students, you develop a particular set of listening and translation skills.  When the little gals and guys are first learning to speak, what they say and what they mean are sometimes open to interpretation.  More than once I've stood still for a few seconds running a phrase over in my mind trying to match what I've just heard with what I know. 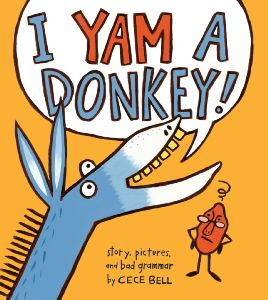 When it finally dawns on me what they are attempting to communicate, I repeat it back correctly.  Sometimes they will smile along with me in recognition.  Other times they repeat the original sentence.  I YAM A DONKEY! (Clarion Books, an imprint of Houghton Mifflin Harcourt, June16, 2015) story, pictures and bad grammar by Cece Bell is a hilarious sequence; the rules of language broken with every utterance.

After the bespectacled Yam points out the error of Donkey's speaking, Donkey replies with an equally cringe-worthy phrase.  What makes it even funnier is he thinks Yam is a donkey; a tad weird-looking but a donkey.

Yam immediately clarifies his true status.  Donkey again hears what he wants to hear and asserts his belief the yam is a donkey.  With increasing frustration Yam tries to correct Donkey's mistake.

This makes Yam crazy.  He says am over and over hoping Donkey will not use yam when he should say am.

To add to Yam's growing agitation, Donkey messes up his use of pronouns, using a singular when he should be using a plural.  Donkey thinks Yam's repetition of the subject and plural verb combination is a hee-haw gone wrong.  Stomping his feet Yam says once and for all he is not a donkey.  He is a yam.  Donkey's wordy assessment of the situation causes Yam to fall to the ground in exhaustion.  He is at a breaking point.  All Donkey can do is make jokes.

In the middle of a heated discussion between Donkey and Yam, three green beans, a carrot and a turnip stroll up to the duo.  In full professorial mode, Yam uses a series of labeled pictures to prove his point.  Donkey's take is that everyone is a donkey.  Yam's last-ditch effort to rectify Donkey's bad grammar is met with a surprise no one could have predicted. Donkey's mind works in mysterious ways.


Told completely in dialogue Cece Bell exhibits a gift for word play.  With the addition of a single letter, y, to a declarative sentence she has fashioned a story using characters displaying contrasting knowledge of the use of language.  With each exchange between the two the tension, humor and pace increases.  Donkey's misconceptions multiply in equal measure to Yam's annoyance.  Here is another sample passage.

Okay.  So what you is saying is that you is a donkey, right?


Rendered in china marker and acrylics on vellum the bold colors and thicker black outlines seen on the matching dust jacket and book case grab your attention.  Hands on his hips Yam is obviously disgusted.  To the left, on the back, the three beans are featured in a small circular image.  The opening and closing endpapers are done in a spring green.  Each has a pattern of carrots, end to end in rows, and the three beans framing the single turnip.  Are these indicative of the conclusion?

Cece Bell begins the story on the title page with Donkey's proclamation.  On the verso and the first page in a double-page illustration we read Yam's reply.  With only five exceptions all of the pictures are two-page; the others are framed as if panels in a graphic novel or are single-page pictures.  The dialogue between Donkey and Yam is shown in speech bubbles.

Donkey's big toothy grin, large yellow teeth highly visible, and his eyes drawn with a circle and a dot depict his singular personality.  With his arms, legs and glasses Yam manages to look downright scholarly.  His body language portrays his every mood.

Two of my favorite illustrations are horizontal panels, one over the other, on a single page.  In the first with an orange background Donkey is taking a long, loud SNIFF! of Yam.  In the second with a teal background Donkey speaks to Yam in several sentences questioning whether Yam is a donkey or not.  Yam is looking rather resigned which sets the tone for his outburst on the next page.


At home or in an educational setting  I YAM A DONKEY! written and illustrated by Cece Bell is sure to ignite laughter in readers and listeners alike.  For sheer entertainment, a lesson on the power of story or to introduce a unit on grammar, this book provides opportunities.  This would make an excellent reader's theater.

If you would like to learn more about Cece Bell, please follow the link attached to her name to access her website.  At this publisher's page you can print off a set of stickers about this title. Update: July 19, 2015 Cece Bell and art from the book are featured at Seven Impossible Things Before Breakfast hosted by author, reviewer and blogger, Julie Danielson.

I YAM A DONKEY! was the funniest read aloud of the year. pic.twitter.com/Vw0EiQYxaR
— ©olby Sharp (@colbysharp) May 29, 2015