Listening For Pipes And Drums

Depending on whom you ask, the word magic will have a variety of meanings.  According to Merriam-Webster, magic is:

Regardless of how you define it, the real question is, "Do you believe in magic?" 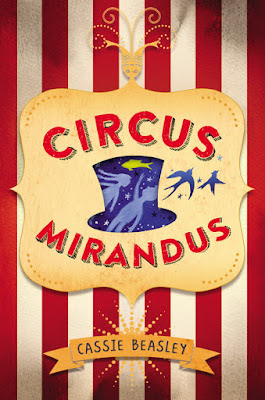 There are many things clarified by science but there are extraordinary happenings which defy a logical explanation; there is simply no reason.  In Circus Mirandus (Dial Books for Young Readers, an imprint of Penguin Group (USA), June 2, 2015) debut author Cassie Beasley brings readers deep into the realm of belief.  We become involved on a personal level with a family touched by magic.

Four small words.  That was all it took to set things in motion.

Ephraim Tuttle is very ill, bedridden and finding breathing difficult.  He has written a letter addressed to The Lightbender (The Man Who Bends Light, Son of the Sun, Master of Illusions) care of Circus Mirandus.  As a ten-year-old boy Ephraim spends a week at Circus Mirandus, a place filled with magical wonders, people and animals.  Not all children are able to attend or be invited to this place of enchantment.

You have to believe it to see it.

On his last day there he musters the courage to speak with The Lightbender.  He, in turn, is taken with Ephraim and his magic trick granting him a miracle.  Unlike other children Ephraim defers his miracle...until now.

At the age of four Micah Tuttle lost both his parents in a boating accident.  His grandfather, Ephraim, is the only family he has really known.  Great-aunt Gertrudis, his grandfather's younger sister, arrives at their home to help care for Ephraim and Micah.  After several weeks in her company, Micah knows she is the opposite of his grandfather in every respect.  She sees no joy in anything, does not care for children and definitely does not believe in magic.

In one of their rare moments together, great-aunt Gertrudis keeps them apart due to the nonsense of the Circus Mirandus stories, Ephraim tells Micah about the letter, the arrival of the messenger Chintzy, a rather saucy red parrot, and the truth.  Circus Mirandus is real.  The promise of a miracle is real.

With a mind filled with hope and worry, Micah forgets about making an artifact for the ancient Inca project he and Jenny Mendoza, a highly intelligent new girl in his class, are working on together.  Their presentation is the next day.  He wants to make a quipu due to the gift the Tuttle family has with knot tying.  When he arrives at school he quickly finds some string in the craft closet, trying to make the object.  To his surprise every knot he ties looks like his grandfather.  It's as if he has captured his essence.  And the knots feel nearly alive.

A night spent with Jenny working on their assignment in the unfinished tree house he and his grandfather are building, the arrival of Chintzy again, an unusual wind, words written in string, a midnight journey, Mr. Head's menagerie, the Amazing Amazonian Bird Woman, The Lightbender and Circus Mirandus swirl around all the characters at an every-increasing pace blending the past with the present and good with evil.  Can The Lightbender fulfill Ephraim Tuttle's request for a miracle before he takes his final breath?  People are capable of more than they think is possible when they believe.


By the last sentence on page two, Cassie Beasley, has readers anxious to continue, completely captivated by a narrative filled with possibility.  There are questions and we long for the answers.  In chapters alternating between now and then, the village of Peal and Circus Mirandus, the connections between all the characters are beautifully revealed.  The flow between these spaces in time and place is formed naturally by sentences rendered with skill, as if the magic from the story and the writing of Beasley are one in the same.

Each character, Ephraim, Micah, Jenny, Gertrudis, Chintzy, (and other animals) the Amazing Amazonian Bird Woman, Mr. Head and The Lightbender (and other people at the circus), are depicted with full and rich personalities binding us to them in happiness or leaving us feeling shock and sadness. The conversations further disclose the attributes we will embrace or abhor about each person or animal (of course the animals talk).  Beasley portrays each event, especially those at Circus Mirandus, with a vividness, taking us willingly into the story. Here are some sample passages.

On the inside, Aunt Gertrudis was probably cough syrup.
She wore her dust-colored hair twisted into a bun so tight it almost pulled her wrinkled skin smooth, and she starched her shirts until the collars were stiff enough to cut.  She made black tea every day in a bright steel kettle.  The tea was scalding and bitter, a lot like her, and she wouldn't let Micah add sugar because she said bad teeth ran in the family.

"All this rain!" she squawked once she was safely atop her perch.  "I don't know why the Head allows it.  Gray, cold, wet.  Ruins the mood of the place.
She ruffled her damp red feathers and glared with one beady yellow eye at the Man Who Bends Light, who was fiddling with an ornate silver coffee service beside her perch.  He looked as he had for centuries.  His sandy hair was a tangled nest, and his beaten brown leather coat swept the ground.  His nose was strong---almost, Chintzy had been known to admit from time to time, like a proper beak.
"The meadow around the circus needs rain as much as any other living thing," he said.  "You're in a snit because you wasted your day on a fool's errand.  Not every twitch of your tail is a magical event.  I told you I wasn't expecting any messages."
Chintzy snatched a lemon cookie off the coffee tray with one clawed foot.  "Shows what you know," she muttered around a beakful of crumbs.
"I told you," he said again, then paused.  "Wait.  There was a message?"

It's important, when you first see magic, to recognize it.  You don't often get a second chance.


I can say with certainty one reading of Circus Mirandus written by Cassie Beasley will not be enough. ( I finished it for the second time this morning.)  You will want to read it over and over, filling the pages with post-it notes.  It is a story about family, life and death, friendship and most importantly love.  It is about believing in those things which you find hard to believe.  You will hold fast in your heart the desire to meet a grandfather who sees truth and silver linings, a friend like Jenny, grounded in logic, who makes difficult choices for someone who needs her, and The Lightbender who spins illusions to make miracles happen.  If you hear pipes and drums, do follow the music.  I believe this will make for an amazing read aloud.

I need to also speak about the dust jacket, book case, endpapers and interior illustrations by Diana Sudyka.  The red and cream colored stripes on the front of the jacket with deep blues and touches of gold allude to specific events and people within the story.  On the book case with a white background the phrase about believing quoted above is shown again on the back. (It's on the dust jacket back too.)  On the front birds including Chintzy, the rather large white tiger, the elephant, The Lightbender and the Amazing Amazonian Bird Woman are featured.  In two hues of blue the opening and closing endpapers showcase a large sun, the word Believe and a string of knots respectively.  Exquisite black and white single-page illustrations spaced throughout the book, many beginning chapters, foreshadow or replicate specific moments.

To learn more about Cassie Beasley please follow the link embedded in her name to access her website and blog.  You will find a link to a dedicated Circus Mirandus website.  If you want to read an excerpt follow this link to the publisher's website.  Cassie Beasley stops by teacher librarian John Schumacher's blog, Watch. Connect. Read., for an interview.  There is an interview of Beasley and discussion about the book at BookPage.  There is another interview at Project Mayhem.