We remember specific days for particular reasons.  Some come every year, others are once in a lifetime treasures.  Time is kind to us, softening the edges of those hurtful days and enhancing those days filled with joy. 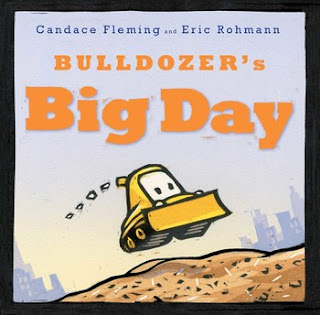 Usually those visiting us annually are anticipated with barely contained glee.  Past experiences heighten our eagerness for their arrival.  In the most recent collaboration between Candace Fleming and Eric Rohmann, Bulldozer's Big Day (Atheneum Books for Young Readers, an imprint of Simon & Schuster Children's Publishing Division, May 5, 2015), the little guy is wondering why his co-workers aren't sharing his excitement.

It was Bulldozer's big day.
And he couldn't wait to invite all his friends to his party.

With impressive speed for a bulldozer, he hurried toward his pals at the construction site.  He first met Digger Truck who acknowledged his query about what day it was with a work-related reply.  Digger was busy doing what digger trucks do.

A tad crestfallen Bulldozer next turned to Dump Truck.  Dump Truck's answer made him feel a little bit smaller.  Like a balloon slowly deflating he traveled to Cement Mixer.  Cement Mixer told him today was like every other day.

Bulldozer's pre-party happiness was almost gone especially when Scraper and Grader nonchalantly announced their plans to him. Hoping Roller Truck would certainly know what day it was, he moved over to chat with him.  This time his question was very different; a reflection of his mood change.  The response he received was not what he wanted to hear.

At this point Bulldozer was so dejected his blade was nearly scraping the ground.  Surely Crane Truck would remember.  His first answer lifted Bulldozer's spirits but the surge of expectancy was momentary.

There was the day-end whistle.  Bulldozer slowly left the construction site not believing how this day had ended. Wait a minute!  What were all those different whistle sounds?  When Bulldozer investigated, he understood what his buddies had been doing all day.  Make a wish Bulldozer!


With simple sentences filled with distinctive degrees of emotion Candace Fleming invites readers to share a very important day with Bulldozer.  Verbs used are a reflection of sounds heard at a construction site;

Each time Bulldozer asks his question the others reply with the repetition of the type of day it is.  This technique coupled with Bulldozer's elation met with their business-as-usual answers makes the conclusion a delightful surprise for Bulldozer and readers.  Here is a sample passage.


As soon as you seen the matching dust jacket and book case it's like getting to spend the day with your best friend.  The signature artwork of Eric Rohmann exudes rich warmth in its heavy black lines and animated characters.  Truthfully, I can't look at Bulldozer without smiling.  He's the kind of character you want to hug as he chugs along the construction site.  On the back, to the left, Rohmann pictures Scraper and Grader with Bulldozer peeking over the mound.  The opening and closing endpapers are black.

The matte-finished paper is perfect for the illustrations created by

using relief (black) prints.  Three plates were used for each image.  The first two plates were printed in multiple colors, using a relief printmaking process called "reduction printing."  The last plate was the "key" image, which was printed in black over the color. (from the publication page)

The picture seen on the front of the jacket and case is continued on the title page as Bulldozer races to the construction site.  We only see the back portion of him beneath the title text spread across two pages.

Fifteen double-page visuals depict a day from dawn to dusk shown in the background canvas.  A nearby city is shown in a faded skyline in more all-encompassing views.  When Bulldozer's moods change so does our position to his encounters with his friends.  We sense his emotional state through his eyes and "body" language.  The use of speech bubbles for the whistles adds an air of hope as the conclusion gets closer.  This causes the one wordless image to be spectacular.  (I can hear the gasps of readers and listeners already.)

One of my favorite illustrations is the second one in the book.  Bulldozer is so happy he is pictured traveling above the ground; appearing to float.  The rolling hills of the site are like a gentle roller coaster.  As the sunlight glows on the horizon, the city is seen in the background.  Small puffs of smoke come from his stack.  His blade is raised and his eyes are smiling.


Bulldozer's Big Day written by Candace Fleming with artwork by Eric Rohmann is charming from beginning to end.  Every single one of these characters will find a ready audience.  Story time, bedtime or any time, this title is going to be requested over and over.  Friends, true friends, don't forget birthdays or big days.