From Mystery To Marvelous

Shortly after 12:30 this morning Xena and I stepped outside for our final stroll before bedtime.  Unlike during the day when breezes are steady, not a leaf stirred.  Temperatures and humidity had dropped bringing clarity to the air.  A half-moon was framed in the sky by birch tree branches now black.  The few stars not affected by the light of the moon were as bright as ripe berries waiting to be plucked.  The rest of the neighborhood was quiet.  We were two lone observers. 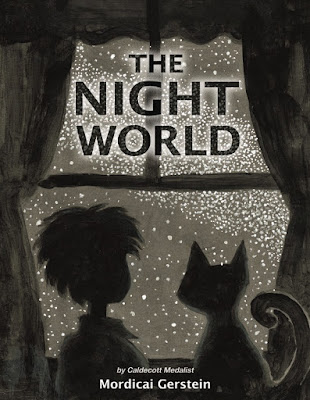 During such unexpected moments as these it's easy to believe you are someplace entirely different than you are during the morning, afternoon and early evening.  The Night World (Little, Brown and Company, June 16, 2015) written and illustrated by Mordicai Gerstein follows a cat and her boy on an excursion.  Nothing is the same.

A cat sits on her boy's bedspread gazing out the window as stars begin to appear in the sky. The yard is still filled with light from the setting sun.  Sometime later the boy is awakened from a sound sleep by a questioning call from his cat.  The boy does not know the hour but the cat cries to go outside.

She leads them both through the darkened house; the rest of the family, even the dog and parrot, eyes closed, are at rest.   As they make their way downstairs the boy looks in wonder around the rooms.  It looks so strange at night.

Urging him to hurry, the two go into the yard.  Everything is cloaked in shadows.  The boy guesses at the identity of the shapes he sees.  Anticipation fills the boy's senses.

Nocturnal creatures begin to cautiously make their way toward the cat and her boy.  They whisper words brimming with expectation.  Something is coming.

First one bird, then another and then an entire chorus announce an arrival.  Sylvia asks her boy to look.  And then he sees it.  His animal companions slip away.  Through its radiance a new world comes into focus.


I imagine the first sentence will be spoken in a whisper.  With those words Mordicai Gerstein lifts a blanket called hush over us all.  As it settles easily around us we feel the gentle warmth and curious awe the world of night brings.  Using a blend of first person narrative with conversation, Gerstein involves us intimately with the story.  We are tiptoeing right along with Sylvie and her boy.  Here is another sample passage.

That shadow is a deer.
Is this one a rabbit?
A porcupine looks up and
whispers, "It's almost here."


Rendered in acrylics, pen and ink and colored pencil on Strathmore gray Artagain paper the softly-textured illustrations are a sensory joy.  The inky black fabric on the front and the back of the dust jacket extend to the flaps where outlines of the boy, Sylvie and a bird are highlighted.  We want to stand with the cat and boy at the window peering into the star-studded night.  On the back, to the left, some of the animals, an owl, a bear, a porcupine, a rabbit, a skunk and a deer, are placed on the outside of the window frame.  They too are watching the sky.

For the book case Mordicai Gerstein places Sylvie and her boy outside surrounded by a swirl of stars.  It's like they are standing in the Milky Way.  They are looking up into the night.  The opening and closing endpapers are filled with the dark and stars.  With the first page turn the boy speaks the first sentence.  There is still enough light outside and inside to see color.  For the verso and title page, the boy is deep asleep.  It is now completely dark.

Before Sylvie and the boy leave the house the illustrations are framed with about two inches of a gray shade regardless if they are single or double-page images.  Gerstein shapes them geometrically, usually narrower at one end of the rectangle.  The first two-page visual, edge to edge, is when they are in the yard together.

It is followed by nine more stunning portrayals of night gradually easing into the light of a glorious new day.  The eyes on each living being convey the peaceful quiet of every moment and their mood.  Gerstein's lines flow masterfully from one element to the next.

All of these illustrations are superb.  One of my favorite ones is when the animals gather around the boy and Sylvie.  They are all looking intently in the same direction, waiting.  (I can already see readers and listeners pointing to each one and naming them.)  Stars dazzle through the trees.  The house sits in the background, all the windows dark.


The Night World written and illustrated by Mordicai Gerstein is breathtaking in its recognition of a night wrapped in beauty, of the nocturnal creatures and the simple gratitude of greeting a sunrise.  Moving slowing from the absence of color to the glow of a full spectrum we appreciate the gift Sylvie has given to her boy.  Please share this book as often as you can.  I know you will be asked to read it more than once.  In an author's note at the end, Gerstein speaks about what prompted the creation of this book.


Mordicai Gerstein has been interviewed at Seven Impossible Things Before Breakfast, Massachusetts School Library Association, and Barefoot Books, Living Barefoot Blog.  For the pronunciation of his name please visit TeachingBooks.net.  UPDATE:  There is loads of artwork at Julie Danielson's Seven Impossible Things Before Breakfast on July 12, 2015.

This book is so spectacular I am giving away a copy.  Good luck to you all.