To Hunt And Be Hunted

Even after the end is reached, they ask to play again.  Exchanges are made and a new search begins.  As often as possible, despite the initial time-consuming nature, a part of most units of study in my library media centers contains a puzzle, a problem to solve, to reinforce basic level skills.  Print to print, print to digital, digital to digital and digital to print students move from clue to clue, seeking a final answer employing what they have learned. 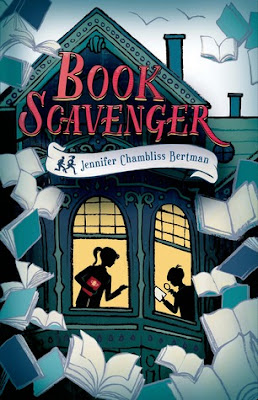 Games in all their varied forms and formats are enjoyed by nearly everyone of every age.  For those who love reading, adventure and mystery, Book Scavenger (Christy Ottaviano Books, an imprint of Henry Holt And Company, June 2, 2015) written by Jennifer Chambliss Bertman with illustrations by Sarah Watt is an all-consuming quest.  It's a race to win a game not yet started.

Garrison Griswold whistled his way down Market Street, silver hair bobbing atop his head like a pigeon wing.

Garrison Griswold is the owner of a flourishing publishing company, Bayside Press located in San Francisco, California.  He is also the creator of a phenomenal game, Book Scavenger, which connects players virtually and in real time.  In this first chapter, which literally starts the book with a bang, Mr. Griswold is on his way to reveal the beginning of a new game, its secrets only known by him.  Two despicable men attack and leave Mr. Griswold hovering between life and death.  One of them carelessly tosses an extremely valuable object behind a trash container in the BART (Bay Area Rapid Transit).

A short time later Emily Crane and her father and her older brother Matthew and her mother following behind them in a minivan, arrive in San Francisco.  They are moving from New Mexico, the ninth state in which Emily has lived in her almost thirteen years.  Her parents are on a life-long adventure to realize the name of their blog, Fifty Homes in Fifty States.

To her brother, who makes friends in a finger snap, it's no big deal.  For Emily this lifestyle is starting to wear a little thin.  She longs for more stability.  This explains her love of puzzles, ciphers, treasure hunts and Book Scavenger.  The huge positive about this move is being in the same city as her literary and gaming idol, Garrison Griswold.

It doesn't take Emily long to figure out the grandson, James, of their landlord, Mrs. Lee, is a kindred spirit.  The Lee family, Chinese-Americans, have resided in this particular building for generations.  Their extended family lives in other parts of the city.  This sense of belonging has never been a part of Emily's world.

As a result of a book scavenging afternoon, scattered flowers and a misplaced bumper sticker, Emily, James and Matthew locate the item lodged behind the trash container in the BART.  The real danger lies in the fact they were seen recovering it.  They have no idea what these people are capable of doing to gain control of this book.

The book, a brand new copy of Edgar Allan Poe's short story The Gold-Bug, is as Emily discovers, the first part of Garrison Griswold's new game, leading to a one-of-a-kind treasure.  As she and James start to unravel the coded hints, an embarrassing event during her first day at the new school demands more of James' attention.  If he doesn't win this particular wager, he will lose Steve, his cowlick.  Yes, he gave a name to his cowlick.

Chapter by chapter, alternating between the two desperadoes and Emily and company, streets and notable buildings in San Francisco are explored in earnest, sometimes while in pursuit.  Tension increases layer by layer in The Gold-Bug hunt, the cipher challenge, a particular band concert, floundering friendships and family dynamics.  There are more twists and turns than on Lombard Street, a red herring or two, and more than one ending where you will gasp and give a sigh of relief.


What readers will find enjoyable about this title is the way debut author Jennifer Chambliss Bertman invites them to solve the puzzles, ciphers and riddles right along with her characters.  We are participatory readers.  This hunt is enriched by other outstanding writing techniques.

Key elements found in stellar adventure and mystery stories, action, a quest, a hero in jeopardy, suspense, clues, smoke screens, enemies, and trusted companions and advisers, are deftly woven into the narrative and thoughts and conversations of the characters.  Vivid descriptions in which the characters are placed evoke a realistic sense of time and place especially in the city and middle school settings.  Bertman definitely sets the pace on high and we gladly ride the roller coaster she has deftly created.  Here are some sample passages from the book.

With a soft grunt, Mr. Griswold collapsed against the slick granite wall behind him.  He crumpled from a seated position to a prone one, his back sliding against the wall, leaving a streak of blood to mark his trail.  He tried to land on top of his bag in an effort to keep it from the men, but Clyde tugged it free.

They were driving through a valley jam-packed with rows of houses wrapped around hillsides like serpentine belts.

James turned past a bakery and entered the mall.  Glass-fronted stores passed by in a blur, then James turned sharply and hustled upstairs.  There was nothing but the sound of their feet pounding until finally they slowed to a stop outside the public restrooms.
"I think we lost them," Matthew said between gasps.
"Quiet!" James held a finger to his lips.


The Book Scavenger written by Jennifer Chambliss Bertman with pictures by Sarah Watt is brimming with intrigue and excitement in every chapter.  Book lovers and puzzle lovers are going to read this over and over again.  I know they will share the exploits of the characters with others, gaining new fans for the book and the game.  At the close of the story Bertman offers an extensive author's note explaining Rufus Griswold, The Gold-Bug, Cipher Challenge, Masquerade, and Book Scavenger The Game

To discover more about Jennifer Chambliss Bertman, this title and her upcoming books, please visit her website by following the link embedded in her name. Follow this link to the website dedicated to Book Scavenger.  Will you play the game?  Where will you hide your book?
Here is an interview with the illustrator Sarah Watts at emu's debuts .
Posted by Xena's Mom at 3:07 PM