There are those who would do the same thing day in and day out committed to pursuing their passion or working toward perfection.  There are others who would alter their daily deeds in the belief variety is the spice of life.  Each individual looks at the big picture through their unique perspectives. 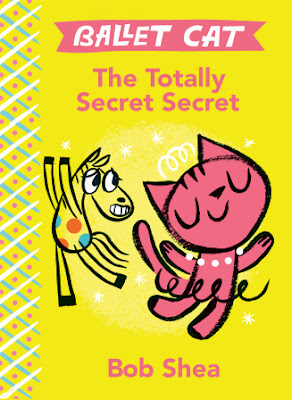 When two friends with differing beliefs try to reach a decision it can be a little bit tricky.  Ballet Cat:  The Totally Secret Secret (Disney Hyperion, May 5, 2015) written and illustrated by Bob Shea follows the best of buddies as they plan their day of play.  The art of compromise is stronger in one than the other.

What do you want to play today, Ballet Cat?
You pick, Sparkles.

Excitedly Sparkles suggests they work on crafts.  At first Ballet Cat is thrilled with this idea. She quickly decides it would be risky to leap with scissors in hand.  Never one to give up, the pony pal has another proposal.

A game of checkers would be fun for the two of them.  Now this is something Ballet Cat would enjoy but how would they be able to kick without ruining the game.  Sparkles demeanor is starting to wilt.

In a last ditch effort, the equine chum, perhaps thinking when life gives you lemons, recommends a business venture.  With her usual initial enthusiastic response, the feline friend falters wondering how they will be able to spin.  When Sparkles questions the necessity of spinning, Ballet Cat assumes it's a joke.

Before you can even think leap, kick and spin Ballet Cat has twisted the choice toward her favorite thing which the two of them play every...single...day.  After several attempts the astute cat notices the lack of eagerness on the part of the pony.  Pressing him for a reason, he confesses he has a

Sparkles is fearful about sharing this particular confidence.  A promise is made.  After the big reveal, decidedly shaken, Ballet Cat has a confession of her own.  This is a day for declarations of the very best kind.


More than once this reader stopped during the story, told entirely in dialogue, to burst out laughing.  Bob Shea's choice of words and pacing elevate the laughable level to supreme hilarity.  His technique of blocking the portions of the story in three-part segments is done with excellence.  When a special section of dialogue bridges these elements both characters are further defined by their conversation.  Here is a sample passage.

Ballet? There is an idea!
Leaping, yes. Kicking, yes, yes. Spinning,
yes, yes, YES!
Great idea, Sparkles.
How did you ever think of it?


Right away readers will notice the raised blue and orange sparkles on the pony and the white finishing touches on the cat as they run their fingers over the book case. The bright yellow on the front and the pink on the back provide a vivid canvas for the pals.  Astute readers will notice Sparkles' less the sincere grin on the front.  The opening and closing endpapers are done with a spring green background and a pattern of blue and orange large dots.  Black, white, purple and pink hues are used to feature Ballet Cat on the initial title page.  Another shade of green on the more formal title page highlights portions of the cat and pony looking at each other warily.

A variety of background colors create liveliness in the flow of the narrative and the characters' actions.  The wide expressive eyes and mouths on both Ballet Cat and Sparkles the Pony leave no doubt as to their current moods.  Shea's lines are filled with animation.  Cadence is controlled with the size of the characters and the number of times they appear on a given page.  We are keenly aware of the intonation of the voice of each character by the size of the font within the speech bubble.

One of my favorite illustrations of many is when they first start to play ballet.  Eyes closed, mouth wide open, Ballet Cat merrily exclaims while moving about


Read silently alone this title is guaranteed to provide an abundance of grins and giggles.  If Ballet Cat:  The Totally Secret Secret written and illustrated by Bob Shea is read aloud to a few or many at story time, listeners will be rolling on the floor gasping for breath due to extreme laughter.  These two friends are destined to entertain for many years.

To discover more about Bob Shea and his work, please follow the link attached to his name to access his website.  For further insights into the process for this book, loads of sketches and art and an interview, visit Seven Impossible Things Before Breakfast hosted by author and blogger, Julie Danielson.  This title is featured at teacher librarian blogs as a review at 100 Scope Notes by Travis Jonker and as a reflection at The Styling Librarian by Debbie Alvarez.

This video on drawing Ballet Cat is adorable.