Persuasion With A Purpose

Over the course of the last three hundred, sixty-five days your excitement has become enormous.  You've hoped.  You've dropped hints discreetly and not so discreetly.  The Happy Birthday Song has been sung.  The candles on the cake have been blown out and a wish was made again.  Now it's time for presents.  Will it be there? 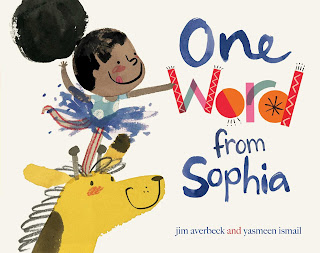 This scenario is played out more times every day of the year than can be counted.  A determined little girl in One Word from Sophia (Atheneum Books for Young Readers, June 16, 2015) written by Jim Averbeck with illustrations by Yasmeen Ismail is going to leave nothing to chance.  Her wish simply has to be fulfilled.

Sophia's birthday was coming up, and she had five things on her mind---
One True Desire and four problems.

Sophia's One True Desire is not what you would expect.  It's as extraordinary as she is.  She wants a pet, a pet giraffe.  Her problems are her family members, a mom, a dad, an uncle and a grandmother.  Each has a focus in their lives which Sophia finds appealing.

To her mother, a judge, Sophia lays out the facts in legalese heavily laden with reason.  Her final argument involves travel to ballet class complete with a map.  Not swayed in the slightest and pointing out a flaw, her mom says no citing her presentation as too lengthy.

Not one to become discouraged, Sophia rallies for problem number two, her dad, the businessman.  Making money involving poop complete with a profit graph is sure to get her father's attention.  As he points out, Sophia forgot to figure in costs.  He comes to an identical conclusion as her mom.  Sophia is using too many words.

Her uncle, a politician, is not convinced by her poll of cherished toys nor her chart.  When he mentions the word loquacious, she knows she needs to change her tactics.  Approaching Grand-mama with resolve, she begins.  Her grandmother quickly utters a resounding

along with, by this time, familiar firm guidance.

Sophia is going to give one last plea to the entire group.  Her request is refined and defined by nothing more than a single word.  It might also involve kneeling and clasped hands.  Is the perfect pet in her future?


In a book titled about one word, Jim Averbeck uses words to great effect.  Instead of the word wish, he uses One True Desire.  He designates her family as problems, hurdles to be jumped to get the ultimate birthday present.  His heart is aligned with his audience.

We cheer for Sophia because of her bubbling assurance in attaining her goal and her clever mind working to her problems' strengths.  Her proposals are sincere in every respect making us at the very least smile but at other times laugh out loud.  The conversations between Sophia and her mom, dad, uncle and grandmother are appropriately splendid.  The introduction of new vocabulary adds to the authenticity and liveliness of the narrative. (A glossary at the end defines the words in simple terms.)  Here is a sample passage.

Her proposal was accompanied by a compelling graph showing how much money she would make.
"I'm sorry," said Father, "but your business plan is unsound.  You failed to count the cost of care and feeding for your manure producer, not to mention the warehousing of poop.


Looking like laughter perched on top of a giraffe, wearing her every-present tutu, Sophia dances into our hearts on the matching dust jacket and book case.  On the dust jacket little hands will love to feel the embossed portions of the image.  To the left, on the back, an assortment of toys from her room is placed on the page.  They further represent her on-the-move personality.  The opening endpapers are in giraffe yellow with line drawings in black of Sophia in an assortment of activities and moods.  In pure white the closing endpapers feature Sophia riding her new pet on the left pointing at the glossary on the right.

A two-page illustration spans the verso and title page.  Striped ribbon frames the visual of Sophia tying a big, big bow on her pooch pal.  Rendered in watercolor and colored pencil on a white background the pictures' sizes shift from two pages to a series of small vignettes on several pages.  Yasmeen Ismail changes perspective to punctuate the pacing of the story.

The style of the illustrations are altered to depict Sophia's thoughts.  They appear as if drawn by a younger person.  These contribute to the humor and liveliness of the text.  Her portrayal of Sophia is so charming we expect her to leap off the page.

One of my favorite illustrations spreads across two pages.  Sophia is standing in front of her shelves speaking to her favorite stuffed toys.  She is posed on one foot, like a sprightly ballerina, with a checklist and pencil in her hands.  A blue stool and a scattering of toys are spread behind her.


One Word from Sophia written by Jim Averbeck with illustrations by Yasmeen Ismail directs our attention to the power of persuasion and the impact of our word choices. In a completely winsome story with a character you can't help but embrace, you realize the value of less is more especially backed by genuine emotion.  You'll want to add this to your must-read-aloud stack.

To discover more about Jim Averbeck and Yasmeen Ismail please follow the links attached to their names to access their websites.  You can view several images from the book at the publisher's website.   You can view loads of art at Seven Impossible Things Before Breakfast hosted by author and blogger, Julie Danielson, along with a link to her Q & A with Averbeck and Ismail at Kirkus. Enjoy the book trailer.

In a search on birthday traditions I located this video by John Green for Mental Floss.