To See In The Sea

Marine biologists study all life in the earth's oceans and other saltwater habitats.  Exploration of a world containing more than ninety-six percent of earth's water increases understanding and assists in preservation efforts.  The adaptations made by the fauna in the given conditions are nothing short of incredible. 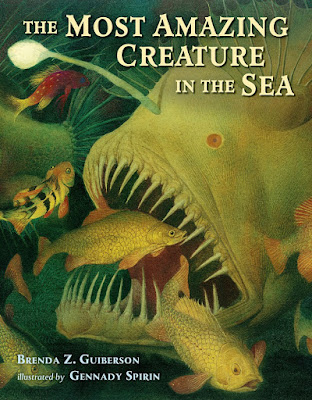 According to this statement

Scientists estimate that no more than 5% of the oceans have been explored. (MARINEBIO)

we've many, many more wonders to discover.  Author Brenda Z. Guiberson and illustrator Gennady Spirin (Frog Song and The Greatest Dinosaur Ever) present to readers an array of underwater residents in their newest collaboration, The Most Amazing Creature In The Sea (Henry Holt And Company, June 6, 2015).  Some of them will be familiar to most readers, others will be enchantingly different.

Who is the most amazing creature in the sea?

Twelve creatures speak with a voice of authority about assets which elevate them to the honor named in the title.  As their characteristics are revealed your respect will grow.  It will give you pause to realize something with no brain backbone, lungs or gills can be so deadly.  Having a large number of eyes and lethal venom more than compensates.

Can you name the reptile which dives up to 4,000 feet?  They also have no fear of the aforementioned creature, dining on them with relish.  One blue-blooded being uses blue light and blue goo to discourage predators.  In the search for food eyes which rotate, looking through the top of your head, then shifting to the front again, might come in handy.

The mimic octopus does exactly as the name implies replicating the appearance of other sea neighbors.  It's a tad bit creepy to learn about the young male anglerfish and their attachment to larger females.  The word gross will quickly spring to mind when learning of the habits of the hagfish, also known as the snot fish.

If you think a being would need to be big to carry 300 million eggs, you would be right.  It's a record holder.  Can you name the largest shark and its size?  In one big gulp this largest creature to ever live on earth holds 17,000 gallons of water.

You will have to be vigilant to spot a leafy sea dragon but it will be well worth the trouble.  Physical characteristics make it seem to be seaweed.  Teeth in their throat?  Wolffish live up to their name.  Seven other smaller inhabitants are named helpers.  Without them the previous twelve would find survival difficult.  The chain of life from the largest to the smallest is essential under the sea.


For the twelve selected creatures Brenda Z. Guiberson begins with I am a... followed by carefully-chosen, intriguing, and sometimes cringe-worthy, facts stated in conversation.  Each animal is speaking directly to the reader.  They are trying to convince us they are

the most amazing creature in the sea!

Using the same format for each presentation creates a sense of anticipation as well as a cadence in the narrative.


Gennady Spirin opens his artistic portrayal of the text with an illustration spanning across the spine from the back to the front, left to right.  He takes us down into the depths of the ocean with shades of green, gold, brown and black.  Luminous and textured the intricate details invite us to reach out and touch the pages.  (I am working with an ARC.) On the title, verso, dedication and author's note pages, text is displayed on a marbleized swirl of blues and greens depicting a watery background.

Fourteen two-page images, the creatures, helpers and conclusion, gorgeously mirror the world in which these beings live.  Rich colors and nearly photographic portraits of the marine life will captivate readers.  Spirin shifts our viewpoint from an encompassing scene to being so close we can look the animal in their eyes.   Little more than two inches are reserved at the bottom of each picture to serve as a canvas for the narrative.

One of several favorite illustrations of mine is the leatherback sea turtle.  For this picture Spirin elected to bring us close to the animal.  The turtle is at the edge of the shore, one flipper dipped into the foamy swirling water.  Patches of grainy sand spot the tough skin.  One lively eye is peering at us.


The Most Amazing Creature In The Sea penned by Brenda Z. Guiberson with pictures by Gennady Spirin is a must read and must have for all professional collections.  If you have a lover of weird and wonderful animal facts in your home or classroom, they will certainly enjoy this title.  This is one of those books which will inspire readers to search for more information such as supplied in the author's note, bibliography and online sources listed at the back of the book.

To discover more about Brenda Z. Guiberson and Gennady Spirin please visit their websites by following the links attached to their names.  At the publisher's website you can view eight interior images. 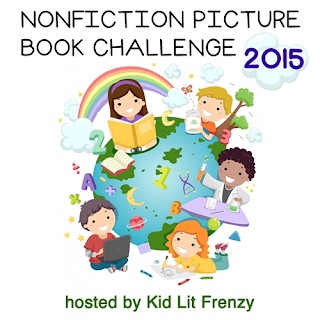