One of the benefits of being alive for decades is the extraordinary changes seen.  One worth noting is the burst of color on television screens, in film, in newspapers and magazines, in the switch on the Internet from text only to graphics and in children's literature.  When much of your childhood viewing has been in black and white, it's simply astonishing. 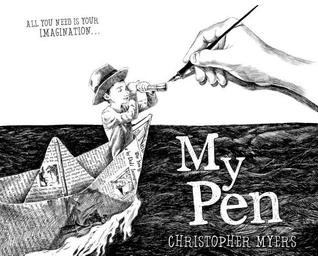 Yet there is a gift in creating images without color.  Light and shadow, lines, the positioning of white and black space and use of perspective can capture uncommon beauty.  You only have to think of the work of photographer Ansel Adams to know this is true.  Coretta Scott King Honor and Caldecott Honor award winner Christopher Myers has written and illustrated a new title, My Pen (Disney Hyperion, March 10, 2015) with striking results.

THERE ARE RICH PEOPLE WHO OWN JEWELS AND HOUSES AND PIECES OF THE SKY.

Famous people can see what they say and do almost anywhere at any time.  If we dwell on these rich and famous people we might feel less significant than we should.  A young boy searching for his place is feeling rather unimportant when he remembers something special, his pen.

This pen makes those who are aged giants.  If desired, the pen can place the giant in the hand of a young girl.  Given time, walking on the clouds is done as easily as walking down a city street.  Dinosaur rides are as common as robins in springtime.

Vast stretches of waves and water can be crossed in a newspaper boat.  There is brilliant individuality within the confines of the pen.  Futuristic sneakers and x-ray vision appear almost magically.

Emotion flows from this pen, fear and great love.  Designs can range from the very simple to the complex.  If allowed freedom, stories will emerge.  Find a pen, readers and use it with thoughtful abandon.


It reads like the pages from a daily journal, informal but filled with inventive musings.  Christopher Myers enhances those thoughts with rich descriptions; old men who have seen better days, warm, sweet hands or tap-dances on the sky.  There is a flow from sentence to sentence; one daydream connected to another, a collection of creativity.  Here is a sample selection.

MY PEN HAS X-RAY VISION.
IT IS NOT 3D, BUT IT
WISHES THAT IT WAS.


The opened dust jacket reveals an interior image on the back, to the left, of the pen as a boy riding a Tyrannosaurus rex.  On the front a partially rendered illustration in exquisite detail entices us to open the book.  We are anxious to see what more this pen has to offer.  The book case is splashes of black ink on white with My Pen in white on a large spot.  The matching opening and closing endpapers are a series of doodles, pen scratches, lines, splotches and dots.

An intriguing dedication in the form of a monetary bill placed on a black page names the boy seen throughout the book. Opposite on a page of white, the title page, the boy is walking diagonally up a slope.  This looks to be drawn as a single continuous line.

Alternating between black and white backgrounds and single or double page illustrations each drawing maintains our undivided attention.  We wish to shadow the pen (and the boy) as an elephant peers from inside a teacup, a pair of sneakers transmits virtually, lungs are butterfly wings and love is shown to all kinds of children. The images' fine lines form breathtaking scenes full of wonder.

One of my favorite illustrations is of the boy standing in puddles.  He is holding a large opened umbrella resting on his shoulder as the opposite hand stretches to catch a raindrop.  The shading supplies luminosity to the pools of water.


My Pen written and illustrated by Christopher Myers is a stunning exploration of imagination and art.  It is guaranteed to promote discussion in readers.  You will want to have plenty of paper and pens available to hand out after you share this with a single child or a group.