Deserted In The Desert

If you've ever been lost it's not a very good feeling.  Your surroundings, if you happen to be in the woods, start to look the same no matter which way you turn.  You have a hard time finding something familiar.  If you are traveling by car, fortunately with advancements in technology, you can usually find your way back on track.  Even with a road atlas, the highways and streets will eventually make sense.  You can discover your mistake. 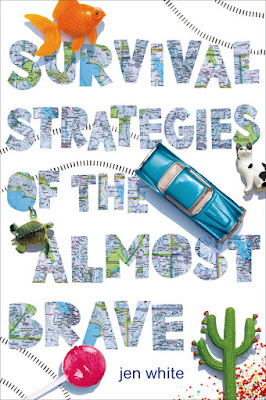 As a child being separated from an adult, even if it started as a hide-and-seek game, can become terrifying.  The sense of detachment is overwhelming.  In Jen White's debut novel, Survival Strategies Of The Almost Brave (Farrar Straus Giroux, June 9, 2015) two sisters are deliberately left alone at a gas station somewhere in the southwest.

FAKE IT.
That's definitely number one in my notebook.  All people do it.  Faking it could save your life.

Twelve-year-old Liberty and her eight-year-old sister, Billie, have come out from the restroom at a gas station to find the camper truck and their father missing.  A truly horrifying incident earlier in the morning has both girls on edge.  There are parts of them hoping their dad will return but knowing he probably won't.

Three months earlier their mom was struck by a car after leaving the hospital having completed her last shift.  Their mom's best friend and boss, Julie, is taking care of the girls when she happens to find their dad's address among their mom's things.  It has been six years since they have seen him.  Believing it would be best for the sisters to be with a parent, Julie leaves them in the care of their well- known photographer dad.  They have been traveling around the southwest from one picturesque place to another.

Using skills like animals acquired from watching endless hours of Hunter and Hunted and faithfully written in her notebook, Liberty determines the creepy gas station attendant and the newly arrived cowboy-looking man are not to be trusted.  She and Billie run for their lives.  After nearly being discovered outside, they hide in the backseat of a car loaded with clothing hanging from a bar.  At least for now they are leaving the gas station in safety.

Every chapter is more gripping than the previous chapter.  Bits and pieces of the time with their mom and the months with their dad are woven into their struggles to get home, to secure stability.  A harrowing night spent outside a hotel coupled with an equally frantic episode in the morning has them on the run again.

People, places and incidents, several angry guests, a waitress, a boy obsessed with Star Wars, a hidden tunnel in a hedge, a bullying brother, a tattoo-covered truck driver, a woman with a horde of unusual pets, a failed escape, injuries and lack of water, one at a time stack against the two girls like a handful of cards in a losing game.  Every attempt to communicate with Julie is met with silence.  In the heartbreaking final chapters, a place brings everything into focus for Liberty.  All the shattered fragments form to fill her heart with certainty and hope.


When finishing this book for the first time one word rang like a bell in my mind, intense.  There are many skillful means employed by Jen White to create this acute sense of needing to turn the pages.  Each chapter is a numbered survival strategy.  The titles, Beware of "Skip To My Lou", Panic Is Not Your Friend, Hide or Beware of Sharks, give us a hint as to what we might experience in each one.  We are privy to Liberty's thought process for every decision she makes to keep her and Billie safe.  The addition of dialogue between Billie and Liberty and the girls and the other people heightens the tension.

Fairly early we know something has happened causing the girls to be in this predicament.  Through flashbacks about their mother and father, White builds the action to a point where the event is revealed but it is not until nearly the end.  Instead of giving specific names to her cast of characters Liberty gives them descriptive names, Shiny Head, Lavender Lady or Spoon Guy.  This is a realistic approach as the girls have no idea who anyone truly is.  It creates an atmosphere of being alone.  Here are a few sample passages from the book.

After living in a camper for the past two months, San Diego felt light-years away.  Like we had slipped through a crack in the atmosphere and dipped ourselves into this strange summer, sticky with newness.  And still after everything, we were alone.  Just the two of us roasting in clay on this quiet, dusty road.

Not even for a second did I believe that.  Maybe it was the way his voice crept up my spine and stayed there.  Pebbles and stones cut into my hands and knees.  Before I came here, I though desert sand was like beach sand, but it wasn't.  It's hard and dry and rocky.  Nothing at all like the beach.  Dry brush scratched my face, and my dirty T-shirt blended in perfectly with the weeds that were as high as my body.  Camouflaged.


Survival Strategies Of The Almost Brave written by Jen White is an outstanding middle grade novel.  It is a gripping portrait of sisters trying to cope with grief, navigate a precarious relationship with an unstable parent and outlast the circumstances in which they find themselves.  I predict this book will rarely be on the shelves, passed from reader to reader.

To learn more about Jen White, the story behind this story and more, please visit her website by following the link attached to her name.  At the publisher's website you can read the first chapter.  Here is a seventeen page Common Core State Standards and Next Generation Science Standards Aligned Presentation Packet for an author visit.  It's a fantastic teacher's guide.  Here is a link to a reader's guide with discussion questions.  Teacher librarian extraordinaire, John Schumacher, hosted Jen White on his blog, Watch. Connect. Read.