Students in my library have a fondness for objects folded from paper.  At the beginning of each year kindergarten students leave wearing sailor hats fashioned from newspaper so they can tell their parents about reading Tom Goes To Kindergarten by Margaret Wild.  Second grade students are amazed at the forms paper takes in the telling of The Something Special.   In the upper grades during April Is Poetry Month the guys and gals shape origami items to go with their written haiku.  For the oldest students, as a culmination to a study of the Dewey Decimal System and earning their pilot licenses (Library Sparks lesson), we have a day of competitive making and flying paper airplanes to earn gift certificates to a local book shop. 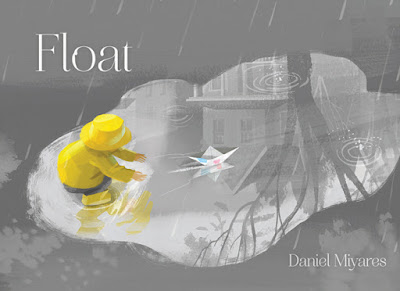 A single piece of paper with words, pictures or both words and pictures can hold a story.  A single piece of paper can represent a real or imagined person, place or thing.  In Daniel Miyares new title, Float (Simon & Schuster Books for Young Readers, June 9, 2015) without words readers enjoy a day with a boy who sees wonder in folded paper.

An open newspaper has been placed on a table.  Adult hands tear a piece, crease and fold it as a younger child leans in to watch.  Now clothed in a yellow rain slicker and hat, the day promising rain, the boy holding a paper boat begins his daily excursion.

As the sky darkens clouds heavy with moisture roll in.  Soon drops of rain prompt him to hide the boat inside his coat.  It's a downpour.

Large puddles are left in the wake of the storm; a perfect place for sailing and stomping.  Along the edge of the roadside curb, swift currents of water pass.  The boy sets his boat on the speedy path.  To his surprise it's moving more quickly than he thought it would go.

Within seconds it is out of his reach.  Racing down the sidewalk he tries to retrieve his runaway vessel.  Where is it?  There it is!  Oh no!  Down, down it drops into the storm drain.

Like a lone sentinel he stands vigil on the small brick arched bridge; watching and waiting.  Heartbroken he heads back home, the happiness he lost mirrored in the new rain showers.  Welcome, compassion, warmth and more creativity bring new light into the day.


The making of a boat from newspaper is an activity passed from generation to generation, child to child.  With this act, requiring only a piece of paper and a learned skill, Daniel Miyares shows readers how a day, even a rainy day, can evolve into one filled with joy and sadness and joy again through our imaginations.  The beauty of this story is in the timelessness.


Rendered digitally with a limited color palette, gray, yellow, white, pink, black and shades of brown, Daniel Miyares begins his illustrations with the dust jacket, an image spanning across the front and back.  The rain is diminishing as the boy sets his boat afloat in the puddle.  The tree-lined street is reflected in the water.  The book case picture, also covering both the front and back, moves in closer to the boat as it drifts on the water.  A hint of sun peeks from a cloud in the upper right-hand corner.  On the endpapers Miyares gifts readers with step-by-step instructions for folding the two objects highlighted in his story; one on the opening pages and the other on the closing pages.

Not wasting any space the narrative without words begins on the title page and verso with the newspaper.  Careful readers will take note of the pictures on the newspaper pages when an item is made.  With each page turn the tale is revealed in a series of visuals moving across two pages or two pages divided into panels supplying pacing.

Miyares invites us to be participatory readers with alterations in perspective.   We see only hands and the newspaper when the folding begins.  As the boy walks down the street we notice the top of his head above a white picket fence, his hands holding the boat high.  When the boat begins to move away, out of reach, our eyes start at the left with smaller images until on the right the boat is prominent.  Emotional impact is achieved with these shifts in point of view.

One of my favorite illustrations spreads across two pages.  The boy has picked his boat up from the puddle.  Holding it in his hand, in a series of six images, we see him gleefully jumping, splashing and leaping in the water.  In the lower right-hand corner a frightened bird squawks and moves out of his way.  I think I can hear the laughter, sloshing and chirping.


Truly uplifting, an ode to the simple joys in life, Float a wordless story conceived and illustrated by Daniel Miyares is marvelous.  While the focus is on the boy, the parent (adult or older brother) (The book dedication reads For my big brother.) plays a part as creator of folded objects and as a conveyor of compassion when needed.  This is a book for all ages.  It has the feel of a classic.

Please take a moment to visit Daniel Miyares website by following the link attached to his name.  You can view his other illustrative work, his blog, and news.  Stop by the publisher's website to see eight interior illustrations from this title including my favorite one and another one causing me to sigh and get a little teary. At TeachingBooks. net an audio tells us how to pronounce his name.
UPDATE:  Author, reviewer and blogger at Seven Impossible Things Before Breakfast Julie Danielson features Daniel Miyares, this title and artwork.  Julie Danielson conducts one of her classic feature interviews with Daniel Miyares at Seven Impossible Things Before Breakfast.