There's No Doubt About It

Our neighbors have a new jet black puppy.  To say it's energetic would be an understatement.  It bounces around in a constant state of motion as if its legs are pogo sticks.  They also have an older Golden Retriever who wanders about the yard trying to ignore the relentless invitations from the youngster to play.  As the one jumps up and down in the face of the elder, she regally walks away, chin lifted high. 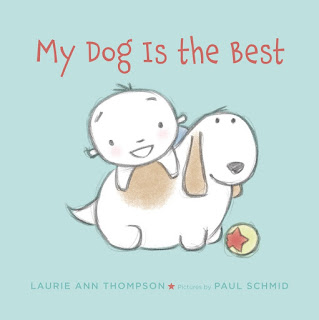 Older dogs, if they so desire, have earned the rightful place in their households to savor every second of the day in silence, drifting in and out of sleep.  Their presence is a cornerstone of what home means.  When you introduce a young boy into the mix, the results are utterly charming.  My Dog Is The Best (Farrar Straus Giroux, June 9, 2015) written by Laurie Ann Thompson with pictures by Paul Schmid tells the story of this enchanting companionship.

My dog is the best.  He does tricks.

This little boy walks up to his dog, blanket and ball in hand.  When he encourages the dog to chase the ball, the dog dozes.  Next the dog continues to rest with the blanket on his back.  This is

As the child lists all the things his dog can do, his pooch pal merely moves from one peaceful pose to the next.  On his back, his trick is rolling over.  Curled up tail to nose, his trick is playing ball.  This boy not only says his dog is the best, he looks for the best.

As the boy pulls the dog on his blanket or runs away with it, he labels this as forms of fun.  He sets the stage for the napping canine to be a hero.  The intelligence of the dog is never in question.  He patiently participates in quiet time activities.  He even allows himself to be costumed as a stegosaurus.

All this hustle and bustle finally tuckers out the little guy.  With a yawn he tells us one final, special quality of his dog.  It ends as it began with a tail-wagging twist.

With the simplest of sentences Laurie Ann Thompson allows us to participate in this child's appreciation of his cherished friend.  After each declaration of

My dog is the best.

he follows with what his dog is.  Each of these five statements is supported with examples straight from the heart of what dogs and their young people do together.  Here is a single example.

My dog is the best. He is strong and brave.
He helps the fireman.
He scares away monsters.

Readers are promptly endeared to the characters when viewing the muted colors, round shapes and soft, sketchy lines seen on the dust jacket.  On the back, to the left, the boy with eyes closed is giving his dog a big hug.  A pale, mint green provides the canvas for the boy and his dog at play on the book case.  The dog, rolling on his back, is giving the boy a quick lick.

An even lighter shade of green covers the opening and closing endpapers.  On the first in the lower right-hand corner a drawing of the boy shows him reaching for the ball with his blanket in his other hand.  On the back in the lower left-hand corner the ball is placed on top of the blanket.  The child and his dog are not featured.  Paul Schmid continues his illustrative story with the boy offering the ball to his yawning dog on the verso and title page.

Throughout the book a cream color is used for the background on matte-finished paper focusing our attention on the little boy and his canine companion.  The text may be alone on the left with an illustration on the right or vice versa.  Sometimes the boy will be on the left with the text and the dog on the right.  Or Schmid may choose to have the image be a part of both pages with the text on one side.  The placement of the image and the text mirrors the cadence created by the narrative.

Tiny details add to the overall emotion readers feel when reading this book.  The red star on the ball, the dog's tongue hanging out in sleep when he's playing dead, the dog's one eye opening as the child falls asleep, and the dog looking at the ball all contribute to the pure joy of reading this book.  Every element of these pictures blends together beautifully.

One of my favorite illustrations of many is of the smiling boy, sitting among cut-up green paper, an open dinosaur book, a bottle of glue and tape, holding scissors in one hand.  On the opposite page the dog is sleeping.  A series of stegosaurus spikes have been taped to his back.  You can't help but smile along with the child.

Words like cuddly, cute and clever, of course, come to mind when you think of My Dog Is The Best written by Laurie Ann Thompson with pictures by Paul Schmid.  This combination of words and images is superbly delightful.  This is one of those rare books about the relationship between a child and their dog which spells classic.  Readers and listeners of all ages will find themselves smiling and laughing out loud from beginning to end.

Please access the websites of Laurie Ann Thompson and Paul Schmid to discover more about them and their other work by following the links attached to their names.  You can read posts on Schmid's blog.  Eight interior illustrations from the book are shown on the publisher's website.  As part of the blog tour Laurie was interviewed by teacher librarian extraordinaire, John Schumacher at Watch. Connect. Read. and by dedicated educator and children's literature promoter Alyson Beecher at Kid Lit Frenzy.  Paul was interviewed at Emu's Debuts about this title.   I think you will enjoy the guest post between Laurie and Paul at author Kirby Larson's blog.