When You Thought It Couldn't Get Any Worse...

Surviving seventh grade with your dignity and inconspicuousness intact is no easy feat.  Sometimes you get to keep one but not the other.  If you have new friendships in place, it's all for the good.  With the months of June, July and August acting as a buffer to the upcoming final year of middle school, you should be able replenish your mindset ready to tackle all the new firsts which come your way.

When the anticipated sequel to a well-received middle grade novel is released you know you're in for a treat when the dedication reads:


To the brave kids, the weird kids, and the cool kids.
Especially the ones who don't yet realize they can be
all three. 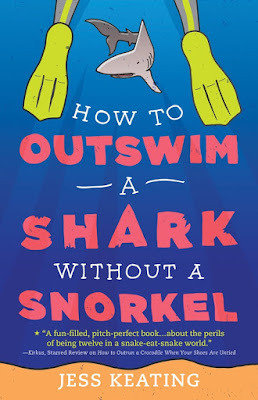 Jess Keating's debut novel, How To Outrun A Crocodile When Your Shoes Are Untied, presented to readers twelve-year-old Ana, short for Anaconda, whose life is like the place where she lives, a zoo.  In the sequel, How To Outswim A Shark Without A Snorkel (Sourcebooks Jabberwocky, January 6, 2015) her high-profile grandfather, Shep Foster, springs a surprise on the entire family focusing on Ana's newly acquired bravery at speaking in front of others.  Swimming with sharks is going to be the least of Ana's worries.

I love the smell of the universe in
the morning.
-----Neil deGrasse Tyson

Really, Mr. Tyson?  Really?  What about the smell
of hippo poop wafting into your bedroom
window in the morning?  Or the wet-dog stink
of a flock of pelicans who strut around like
they own the place, and no matter how often
you try to shoo them out of the way, they
get even more puffed up and snooty at you? ...

Some sharks can never stop moving, or else
they will suffocate and die.
-----Animal Wisdom

Whoa, sucks to be them! Can you imagine
never getting to sleep in?  Or laze around on
a Saturday morning in your jammies watching
cartoons? ...

Ana, her twin brother Daz, her mom and dad, Sugar, her grandfather's girlfriend, and her grandfather have all gathered outside near the polar bear exhibit.  Moving toward some constructions signs, her grandfather raises a tarp leading them inside to view the secret project. With available resources and renovations The Marine Adventure Zoo has been built.  He, of course, wants Ana to give presentations here like she did with the reptiles.  To make matters even more uncomfortable, she is to interact with the sharks.  Yikes!  Not wanting to be the weak link in this new chain of events, she agrees.

Barely accustomed to this switch in her summer plans, while video chatting with Liv, her best friend who moved to New Zealand from Denver, another bit of stressful news is revealed.  Liv is skipping a grade and moving to ninth grade next year.  This means their pact to kiss a boy before high school is on fast forward.  Double yikes!  Kevin, her brother's best friend, is clearly a candidate but he and Ana are just getting to know one another better.

The final blow comes about a week after Grandpa's big reveal.  Apparently the zoo has been getting calls for volunteers after Ana's fabulous presentation.  A student from Ana's class has been chosen to work with her at the new marine facility.  Imagine Ana's shock when in walks Ashley, the leader of the pack of bully's, a Sneerer.  Triple yikes!  (cue Twilight Zone music)

Each experience, each interaction, with her parents, Grandpa and Sugar, Daz, Kevin, Bella, a new friend, Ashley, Patricia, the keeper, Logan, an older student intern and his girlfriend Danielle, at times clarifies and other times muddies Ana's thoughts and opinions.  One decision after another is shaping her summer and the person she can be.  Two mysterious incidents at The Marine Adventure Zoo nearly derail every step forward she has made.  Being brave is not always easy, but it produces the best kind of things.


The voice of Ana is one of the most genuine personalities in middle grade literature.  Jess Keating has demonstrated her true wizardry with words in shaping this girl's world, the people in it and every single moment during the summer weeks. We are brought into this story through realistic conversations between the characters and Ana's thought processes.  As in the first book, humor is liberally used.  Readers will find themselves laughing out loud repeatedly because the truth can be hilarious.  Keating uses our collective memories of being twelve beautifully.

Each chapter begins with a bit of Animal Wisdom about marine life followed by Ana's comments.  These are placed on a piece of paper taped to the page full of her special brand of teenage wit and wisdom.  Woven into the chapters is a Creature File about important people.  Opposite Species Name, Kingdom, Phylum, Weight, Natural Habitat, Feed On and Life Span are her candid remarks.  As a writer of lists to help make proper choices, several chapters contain Ana's numbered possibilities.  Here are some passages from this book.

Please.  Reptiles can't fool me.
The babies had hatched only minutes ago, just in time for Grandpa to call us at home in a frenzy, giddier than a dog in a Milk-Bone factory, yammering on about "the miracle of life' and all that.  From what I could tell, the miracle of life came with a lot of ...goo.  The hatchlings were already chirping up a storm and nipping at fingers when Daz and I got there.  That's the thing about living in a zoo.  You've got to be ready for everything.

I stared dumbfounded.  "You're talking about a dead guy at a time like this?"  I shook my head.  My friends, the people who were supposed to care most about me, were telling me not to worry about Ashley.  Doesn't that sound wrong?  That's like saying, "Oh, that's just a river full of piranhas.  Why don't you hop in?" Or, "Hey, I've got some expired milk here.  Let's have a smoothie!"


How To Outswim A Shark Without A Snorkel written by Jess Keating will captivate fans of the series (and generate new ones) leaving them eager for the third book, How To Outfox Your Friends When You Don't Have A Clue, being released this October.  On the first page the spirit of Ana seeps out lifting you up, chapter after chapter.  There is much to love about all the characters and the way they each grow throughout the story.  If you are looking for an outstanding middle grade series, this one comes with my highest recommendation.


To discover more about Jess Keating be sure to stop by her website by following the link attached to her name.  To celebrate the release of this book Keating produced a series of videos found here.  Jess Keating was a guest at teacher librarian extraordinaire John Schumacher's blog, Watch. Connect. Read.  During the blog tour for the title she was a guest blogger at Watch. Connect. Read. and was interviewed by I Love Reading teacher, Colby Sharp, at sharpread.
Posted by Xena's Mom at 9:00 PM