When you live in a state surrounded by water filled with inland lakes and rivers, learning to swim is a necessity.  After nearly drowning during lessons at the YMCA, swimming under water became less frightening than swimming on the water.  My wise and caring Dad helped by placing coins in the shallow section to be retrieved by jumping in and swimming along the bottom of the lake. 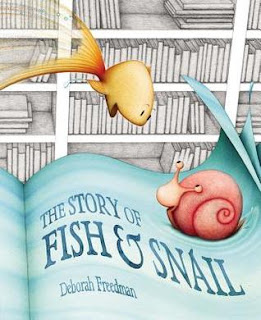 
Every day...
Snail sits in one special spot, waiting
for Fish to come home with a story.

On this day Fish returns home excited by the discovery of a new book.  Snail is thrilled with this news, too, wondering if Fish will tell the tale.

Delight turns to dismay when Snail learns this story is not going to be told.  Fish wants Snail to come into the new book.  Fish's zest for the vastness of a watery wonder filled with adventure in this fresh tome completely overlooks Snail's sense of security in staying exactly where Snail is.

Snail fails to see the joy in secret treasure and a pirate ship.  Snail finds pleasure in princesses, kittens and sleeping in the same spot.  With these thoughts voiced, Fish responds that what Snail likes is boring.

Taunts are tossed between the two; voices getting louder and sentences getting shorter until...with a flash Fish leaves their book. But...but...but...how can this be?  Snail is in a story about Fish and Snail with no Fish.


Told entirely in dialogue except for the introductory and closing sentences, Deborah Freedman instantly invites readers into the intimacy of Fish's and Snail's world.  Within a few conversational exchanges it's easy to understand the two personalities; the one preferring the comfort of routine, the other needing the challenge of change.  This is even enhanced further by the word choices given to Fish upon returning from the new book;

It's also crystal clear, though passionate about their respective positions, they are bound to one another.


In looking at the two-page array of the cover, splashes of water following Fish leaping toward Snail, the three colors against the blacks, grays and white of the bookcase, you can't help but feel the pure elation of the moment.  Lightly tinted blue-green watery opening and closing endpapers welcome readers.  Zooming back from the cover image the title page shows an open book in the thematic color palette, on a stack of the tonal black books, a huge splash of water with the glimpse of a golden tail on the left with the information on the right.  The verso and first page of the narrative continue with the same perspective giving readers a clue as to the smaller world in which Snail and Fish live; a fish bowl.

As the conversation begins and intensifies we move in closer and closer; Fish's movement about the page highlighted by splashes and bubbles as if swimming in water.  We are well aware of the emotional state of each by the position of eyes and eyebrows.  The viewpoint shifts again after Fish leaves to capture the lengths...and heights Snail needs to conquer to follow Fish.  All of the illustrations extend over two pages.

Freedman's use of watercolor and pencil and/or ink with the contrasting limited color palette skillfully presents the realm of a fish bowl or ocean within a book within a book.  You can't help but be amazed at this portrayal of speculative visualizing.  I adore so many of these illustrations but two of my favorites are:  the pile of books in front of the book shelves with the huge SPLOOSH! reaching to the top of the stack representing Snail's bravery and the two friends on the wavy pages of the new book, alternate personas in place as they embark on their journey.


The playful pal and comfortable companion are delightfully depicted in The Story of Fish & Snail written and illustrated by Deborah Freedman.  When it comes to friendship, living the story is much better than listening to the story; your world grows, your spirit soars and your heart is brimming with happiness.  Oh, let me tell you; this book is meant to be shared...again and again.  This would be lots of fun as reader's theater or at the very least be sure to use a special voice for each of the characters.

I've placed links to Deborah Freedman's website and her blog with her names above.  Update:  An Educator's Guide to the Works of Deborah Freedman is now available.
Posted by Xena's Mom at 7:50 AM