The Story Behind The Story

Stepping into the land of fairy is like closing your eyes and taking a leap of faith.  Traditional, original, tales have a mixture of grimness and happily ever after.  Those stories altered or fractured tend to lean toward the humorous.  Whatever turn they take, in my experience, it's been a journey worth taking. 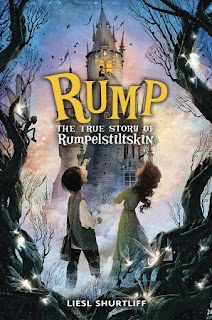 It's when readers are given a more detailed and elaborate view of characters, a shift in focus, the magic found in those stories heightens.  Rump: The True Story of Rumpelstiltskin (Alfred A. Knopf, April 9, 2013) imaginatively written by debut author, Liesl Shurtliff, gives readers in the character of Rump, a person to admire, a story to hold in our hearts long after the final page is turned. The Brothers Grimm should have searched harder; finding this story, a story to be remembered.


My mother named me after a cow's rear end.  It's the favorite village joke, and probably the only one, but it's not really true.  At least I don't think it's true, and neither does Gran.  Really, my mother had another name for me, a wonderful name, but no one ever heard it.  They only heard the first part.  The worst part.

When living in the Kingdom your name has great significance; it's your destiny.  On the day he was born his mother died before his full name could be spoken aloud.  So twelve-year-old Rump, who stopped growing when he was eight, is an easy target for the miller's sons, Frederick and Bruno, two mean-spirited bullies.  His only ally is Red, a girl with gumption, living with her mother.

For those living in the shadow of The Mountain gold is the key to survival.  The amount of gold mined by individuals each day determines the measure of weekly rations received from Oswald the Miller; a sly, piggy individual.  An abandoned spinning wheel behind the wood pile at Rump's and his Gran's cottage and Opal, the Miller's odd but beautiful daughter, spinning away during the food handouts, seems to be sending a message to him.

In the dark of night the pesky pixies plaguing him more and more, Rump makes a startling discovery; he can spin straw into gold. Magic has rules of its own, prices to be paid; turning what first appears to be a blessing into a curse.  Gran's illness pushes Rump to make bargains; bargains with disastrous results and unforeseen consequences. Statements by Red's granny concerning destiny, trouble and watching your step are becoming painfully clear and true.

A visit to The Witch of The Woods offers Rump his only hope.  Trapped in the web of greed wrought by Oswald the Miller and King Bartholomew Archibald Reginald Fife, spinning, spinning and spinning some more, scaling castle walls, encountering sludge-eating Trolls, learning from three wondrous aunties and trying to find the only thing able to save everyone, will test Rump's remarkable resilience.  To change is the challenge.  To cleverly take control and spin his own kind of magic will direct Rump's destiny...if he is able.


What makes this tale rich and captivating is not only the inclusion of many of the original elements; the insatiable miller and king, the miller's daughter locked in a room filled with straw, each amount larger than the last, the items traded to Rumpelstiltskin, and the broken floor boards but turning the story around, having it told from Rumpelstiltskin's perspective.  Including characters from other fairy tales, Red, her mother and granny, Kessler the peddler and all the mice, enhances the aura of being in the realm of once-upon-a-time.  Liesl Shurtliff creates a story with rhymes and humor, trolls unlike any others, obsessive pixies, messenger gnomes and people you will love, admire and despise in a land of no names and names with strength, where trouble can lead to triumph.

Dialogue between the characters is in keeping with the setting as are descriptions of events.  There is never any doubt as to exactly where you are.  You are with Rump every step of the way...and you are more than happy to be with him.  Here are a couple of passages.

I started to think this was a very stupid idea.
Just as I was about to turn back, a twig snapped and Red appeared, her cheeks and nose rosy with cold and her breath raspy from running.
"What do you mean you're going to see the witch?" Red asked.
"I have to," I said.
"Rump, witches don't help with things like this.  It's not that they can't.  They don't like to, and even if they do, sometimes they cause more trouble."
"Opal is in trouble because of me." My chin began to tremble.
"Opal got taken away because her father is a greedy pig!"
"No," I said. "Because I spun all that gold. And then I traded it with the miller, even though you told me not to.  And then I tried to hide the gold, but I dropped it right in front of the king!" I held my breath to keep the tears from spilling over.
Red was stunned into silence.

Slowly, I crept out of the bush and tried to remove all the thorns.  The earth was wet and squishy beneath my feet, so my steps made squelching sounds.  I froze and waited for movement or noise.  All was still.  Heroic rescues are not as glamorous as people imagine, I thought as I squished along in the muck.


Liesl Shurtliff doesn't need a spinning wheel, a loom or needle and thread, her writing weaves us into the world of Rump: The True Story of Rumpelstiltskin like threads gathered by a master.  This is a fairy tale as glorious as any original waiting to be shared aloud to many or only one.  When you open the cover, the magic spills out, surrounds you and stays...happily ever after.

Please follow the link to Liesl Shurtliff's official website embedded in her name above.  This link is to the publisher website where the first fifty plus pages can be read.  Liesl Shurtliff has been interviewed on many sites but this link is to The Lucky 13s.
Posted by Xena's Mom at 8:32 AM