There is nothing that restores your faith in humanity as when a group of people band together to do the right thing.  A specific moment may prompt an individual of courage to rally others to the cause.  The lifestyle of an entire community can reflect bravery in the face of laws which dictate they act otherwise. 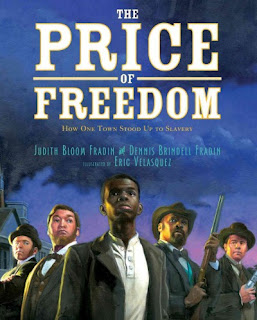 On September 18,1850 The Fugitive Slave Law was passed by the United States Congress as part of a compromise between free and slave states.  If a slave was found in a free state, it was a matter of law they be returned to their owners.  The Price of Freedom: How One Town Stood Up To Slavery (Walker Books For Young Readers) by Judith Bloom Fradin and Dennis Brindell Fradin with illustrations by Eric Velasquez is a nonfiction picture book that speaks volumes on the commitment of people, their willingness to break the law, to help their fellow humans.

One frigid January night in 1856, John Price and his cousin Dinah took two horses from their master's barn.

They had a friend, Frank, on another farm who was to join them.  The three left Kentucky to make their way to Ohio, a free state.  Although the Ohio River was frozen it wasn't until daybreak when they found a way to climb the river bank.

Taken in by a Quaker man until they were well after their harrowing escape, they eventually split up; the two men going one way, Dinah another.  John and Frank knew they needed to get to Canada to be truly free.  Making their way along the Underground Railroad, they reached Lake Erie only to discover it was not yet safe because of ice.

Oberlin, Ohio , the site of Oberlin College and then, an active community in helping runaway slaves, is where the two decided to wait out the winter.  Nearly two years later, having felt welcome and living in the company of other African Americans (close to 400), John and Frank were still there.  But trouble had followed and found them in the form of Anderson Jennings, a slave hunter from Kentucky.

Jennings had been promised $500 per man to return John and Frank.  He found a family in Oberlin who supported The Fugitive Slave Law.  Their son, Shakespeare Boynton, was given $20 to betray the two men.  As their plot unfolded John Price was taken against his will.

A seemingly uninterested Oberlin college student, a wagon ride to nearby Wellington, the attic of Wadsworth Hotel, a train bound for the southern states and hundreds of men and women, of all ages, of differing occupations and color, changed the fate of John Price.  When verbal negotiations failed, the heroic actions of men prevailed.  While John, Frank and Dinah disappeared like so many ghosts of the past, hopefully finding freedom, many of the men who aided them were not so fortunate, eventually serving time for their defiance.  The Oberlin-Wellington Rescue of 1858 is permanently affixed in history

What makes this title excel is the obvious thorough research on the part of authors Judith Bloom Fradin and Dennis Brindell Fradin.  Interwoven in the narrative are personal accounts, names and occupations and dialogue of rescuers.  That day in September 1858 is heightened by the listing of the hour and minutes before each specific passage.  The recounting of the arrest of one of the rescuers and the subsequent trial add to the gravity of the undertaking.  Here is an example passage.

Oberlin student William Lincoln was in his room when some classmates pounded on his door.  He was the man to rescue John Price, they told him, offering him a gun.  Lincoln hated slavery, but he also hated violence.  Unsure what to do, he knelt on the floor with his Bible and asked himself:
"If it were your own brother, what would you do?"


The matching jacket and cover support the heart of this historic event, the front visualizing the people willing to stand up for John Price, the back showing one adult hand dropping a $20 coin into a younger outstretched hand with the words, How much is one man's life worth?  Opening and closing endpapers show a darkened river landscape.  Wood-grained planking provide the background for the title pages.

Rendered using mixed media with oil paints on watercolor paper, the illustrations of Eric Velasquez are brimming with atmosphere and emotion.  Many are spread across two pages to capture the intensity of a given situation.  Wood-grained framing is used repeatedly on single pages, a double page picture and on two smaller visuals to provide a sense of the past.  You can't help but feel that any minute the pictures might come to life allowing you to step into the world of 1856-1858.  One painting in particular stands out:  John and Frank looking around a large tree near a fence with the moonlit sky in the background as they make their escape.


Even though I've read The Price of Freedom: How One Town Stood Up To Slavery by Judith Bloom Fradin and Dennis Brindell Fradin, illustrated by Eric Velasquez, several times, the power of the story is still the same.  The combination of the writing and pictures is captivating, compelling the reader to turn the pages as quickly as possible.  I am thankful for these authors and this illustrator, for the time they committed to keeping this portion of history alive, for calling attention to the bravery of many.

At the back of the book are a short explanation of the Underground Railroad, a bibliography, recommended sources for further reading and a list of websites.
Posted by Xena's Mom at 10:21 AM