Every spring as soon as the ground thawed and the mud dried up, after school and on weekends, the neighborhood kids headed to the vacant lot on the street for a game of softball or baseball.  When school finished for the summer, day in and day out, we would play ball.  Even when the leagues started, we would still throw together a game when we could. 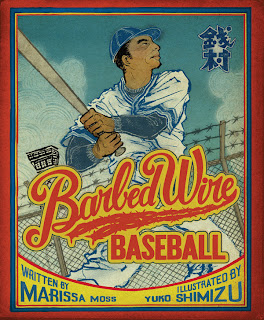 In 1968 when the Detroit Tigers won the World Series our entire student body gathered in the high school gym to watch it on televisions wheeled in on carts; hearing Ernie Harwell's voice on the radio forever etched in our memories.  America's past-time brings people together in a shared passion.  As evidenced by Barbed Wire Baseball (Abrams Books For Young Readers) written by Marissa Moss with illustrations by Yuko Shimizu, it can be the silver lining in the hardest of times.

Zeni watched the wooden bat thwack the baseball, hurling it high and straight.

From that day forward Kenichi Zenimura (he was eight years old) made his life's focus the game of baseball.  Despite his small stature even as an adult, five feet tall, hardly weighing 100 pounds, Zeni coached, managed and played in two leagues in California.  His skills were so highly respected he played with New York Yankee legends, Babe Ruth and Lou Gehrig, in an exhibition game.

On December 14, 1941 everything changed.  After the Japanese attack on Pearl Harbor, Zeni, his wife and two teenage sons, along with 120,000 other Japanese Americans, were sent to internment camps. Their ancestry alone labeled them as potential enemies of the United States.

Rows of barracks filled with rows of cots surrounded by barbed wire fences in the desert of Gila River, Arizona became their new living quarters.  Zeni knew there was only one thing which would keep hope alive; one thing which would make this seem more like home---baseball.  He began alone clearing a space of rocks and desert plants but was soon joined by his sons and other men and boys.  Making the dream a reality had started.

Each time his sons thought the field was ready for play, Zeni would say not yet.  Each time Zeni was aiming for the closest possible authentic baseball park.  A borrowed bulldozer, diverted irrigation, pipes from the laundry room, a clandestine trip in the night, potato sacks and flour all added together with the hard work of many to create a miracle in the middle of the hot sun and arid land.

Try to imagine the first game, the excitement filling the very air as six thousand people gathered to watch.  Zeni was at bat.  He swung.  The ball and his spirit soared out and over the barbed wire fence.


The thorough research of author Marissa Moss is noticeable on the first page.  Using personal details she brings this prominent person of the past to life for her readers.  While some readers will know of the internment camps, few will know how this man's love of baseball transformed the lives of those at the Gila River Relocation Center in Arizona.

Her writing technique, a blend of narrative and dialogue, while informative is full of energy and warmth.  Each portion of the book is as captivating as a work of fiction but even more interesting for readers knowing it's all true.  Here is a single passage.

Zeni stood staring at the dry earth, which was broken up every now and then by a few bits of green.  In all the brown and gray, with a dull, coppery sky overhead, he felt as if he were shrinking into a tiny hard ball.


This is the debut picture book for renowned illustrator Yuko Shimizu.  Rendering the illustrations with Japanese calligraphy brush and ink, scanning and then coloring done entirely in Adobe Photoshop 3 and 5.5, she creates visuals stunning in their accuracy and depiction of the time, place and people.  The picture on the front cover speaks of the depth of character, courage and determination of  Kenichi Zenimura, the Japanese writing in the upper right hand corner spelling his last name as it might have appeared on Japanese baseball cards in the mid-twentieth century.  On the back of the jacket is a baseball with his name in the center superimposed on a barbed wire fence with golden lines extending like rays of a sun.

The cover is different; featuring two poses of Zeni from the inside of the book.  Opening and closing endpapers are a dusty teal sky with textured clouds over a barbed wire fence along the bottom.  The title page is an extension of the endpapers with a single large hand clasping a homemade baseball ticket  including the pertinent information on the right; a clever, meaningful design.  The remaining visuals all extend from edge to edge of two pages, enhancing the text beautifully.  They are pointed, poignant and uplifting.  One of my favorites is Zeni sitting on his cot at night after his arrival at the camp.  A single light bulb dimly lights the room as moths fly around the glow.  He is holding in his hands the photograph of himself standing between Lou Gehrig and Babe Ruth with three other ball players.


Author Marissa Moss and illustrator Yuko Shimizu have brought to readers a brilliant rendition of the life of Kenichi Zenimura and his place in American and baseball history in their book, Barbed Wire Baseball.  This is one of those nonfiction picture books which could be used in the study of this time period at many age levels.  It has potential to be used for various discussions on a variety of topics.