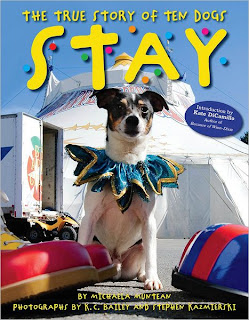 You can never predict with complete accuracy what will happen at any given moment, day, week, month or year but you hold the power when it comes to responding to those events, big or small.  You can decide to see them as an opportunity, another chance to be your best.  Stay: The True Story of Ten Dogs (Scholastic Press, April 2012) written by Michaela Muntean with photographs by K. C. Bailey and Stephen Kazmierski is a book clearly highlighting how a disastrous accident transformed a man and he, in turn, transformed lives, canine lives.

These two sentences began the story of Luciano Anastasini.  As far back as his great-great-great-great grandparents, Luciano's family had been circus performers.  With love and joy it was a destiny he willingly embraced.  He most admired and wished to emulate the trapeze artists and tightrope walkers.

In the mid-1990s during an act using the Wheel of Destiny some fifty feet in the air, Anastasini fell resulting in multiple broken bones.  His days as an acrobat were over but his love of the circus was not.  As he stayed working at the circus, doing whatever he could, Luciano Anastasini was thinking; thinking of a different act, an act with dogs.

In that his life was beginning anew, Anastasini wanted to find dogs needing a new life; searching shelters and pounds.  What others saw as roadblocks, he saw as potential, pooch possibilities.  His first five new friends were labeled a thief, a crazy weirdo, a stick, a cranky grouch and a digger that would give a backhoe a run for its money.

As an acrobat Anastasini had no idea how to train dogs but he was clever enough to realize dogs need to be dogs.  He watched and learned, watched and played, watched and trained; all with patience and a heavy dose of positive reinforcement.  Bowser, Penny, Stick, Tyke and Cocoa lived, worked and played with Luciano Anastasini for close to two years before they performed in front of an audience, a group of elementary school students.  They were a hit!

From tragedy to triumphant success this man and his original canine family have attracted other dogs in need of a second chance; the numbers growing to ten.  From a school gym to some of the most well-know circus shows, Luciano Anastasini and his Pound Puppies provide playful, comedic entertainment.  From unwanted to loved, from broken to healed and whole this true story reads like the best kind of magic.


In her nonfiction debut, author Michaela Muntean, having spent weeks with Luciano Anastasini and his dogs tells a story worth knowing as if we are in a personal conversation with her.  Initially she introduces readers to the man and his life with the circus.  Then she shifts to the first five dogs, detailing all their apparent faults.  Taking us back to Anastasini we come to understand how he sees those traits, how he determines to use them in the act and how he essentially becomes one with each of the dogs.  Muntean brings the world of Luciano Anastasini and his dogs into our presence through her skillful storytelling skills.  Here is an example passage.

On their days off, Luciano gives the dogs a bath.  He brushes and grooms them.  They go for walks, or just hang out together.  Luciano knows that life can't always be a circus, and sometimes they need to do nothing at all.  He also tries to spend time alone with each dog.  He says that dogs aren't that hard to understand.  It's true that they all need love and attention, but they also need someone who thinks they're special.  Of course, everyone needs that, whether they're a dog or not.


Photographers, K. C. Bailey and Stephen Kazmierski, seize the reader's attention with the jacket and cover and never let go until the final page is turned and the cover is closed.  Full page close-ups, double page spreads, insets and framed groupings all serve to depict the essence of these dogs.  At times all we see are smiling eyes, a black nose and pink tongue hanging among fur or perhaps the back of Luciano, a dog carried on his shoulder facing the camera.

The first five dogs, Bowser, Penny, Stick, Tyke, and Cocoa receive several close-up shots, in repose or in action.  The newer dogs, Rowdy, Meemo, E-Z, Free and Sammy are given puppy portraits over a double page layout.  Bailey and Kazmierski alternate between training, at play and circus performance photographs, each captured so well it's as if we are there seeing it in the moment.


This ringmaster shares center stage with his devoted dogs in Stay: The True Story of Ten Dogs researched and written by Michaela Muntean illustrated with photographs by K. C. Bailey and Stephen Kazmierski.  Kate DiCamillo, in the introduction, states:

We, too, are not always as we seem.  Our best selves are sometimes hidden.  But what if someone saw us, truly saw us and believed in the wonders waiting inside of us?

The best part about this book is not that it is heartwarming or hopeful or that its well-written with outstanding photographs.  The best part is that this is all true.  This is a nonfiction title not to be missed, to be shared.