Watch Out For The Water!

It's that time of year when the end of school is fast approaching or for some, summer break has begun.  The days are longer which means more outdoor fun; bike riding, skate boarding, baseball games, days at the beach building sand castles, and endless neighborhood games of capture the flag and hide and seek.  When the children come tumbling inside instead of being cold and covered in snow, they are coated in grass stains, dust, dirt and mud.  In that case, it can only mean one thing and one thing alone...the dreaded bath. 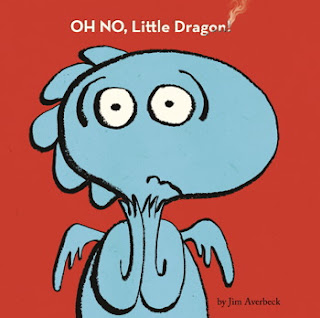 It's a major accomplishment to get them in the tub.  Bargains are made.  Usually, but not always, the watery occupants end up with pruney skin despite their earlier protests.  For some though, as in OH NO, Little Dragon! (Atheneum Books for Young Readers, August 2012) written and illustrated by Jim Averbeck, pruney skin is the least of their problems.


Little Dragon had a spark in his heart,
so he could huff and puff and ...
PHOOSH.

Oh my, how he loves to phoosh decorating the air with fire like an artist who puts paint to paper. And his mama loves her fiery child and his flames.  But anyone knows, where there is fire, eventually there will be soot.  And Little Dragon looks as if he has been dipped in the stuff from the top of his head to the tip of his claws.

Little Dragon is no different than any other child...baths produce protests like "phew", "phooey" and general grumpiness all around.  Finally succumbing to the inevitable, playing with his new wooden boat, it falls victim to his huffing and puffing.  Fire on board!  Cannonball to the rescue! Sploosh! Gulp!

Her reply to his question will warm you as much as it seems to Little Dragon.  Little Dragon is getting warm.  Oh, yes he is.  He might even be getting hot.  Could it be?  Spark or no spark, Little Dragon has learned a significant bath time lesson. In the future he is taking no chances.


Spare text and pacing make all the difference in this title.  Little Dragon's remarks and reactions are typical for his age and for his er...specie.  Readers will feel a kinship with his attempts at finding his spark, with his thought processes.  Repetition of Oh no and Phoosh entices readers into the rhythm of the narrative.


As soon as I saw the cover, I knew I had to read this story.  The panic-filled, wide-eyed look, the anxious mouth and hands placed on the face of the blue dragon was a huge invitation.  The back portion shows a burned and smoking heart-shaped, child-like drawing of a mother dragon holding her little dragon with the word PHOOSH! underneath.  Opening and closing endpapers done in two tones of gray feature a row of six trees (a line, a circle with dots scattered around), one with flames shooting out the top.

The first title page has the gray outlines of castle bricks in the background, blue dragon hands holding a red crayon finishing a drawing of a family of dragons.  Following is the verso and second title page, a single illustration spread across both.  Burned edges frame another crayon drawing of four homes in a row; three are similar with green trees and red apples.  The fourth is a gray castle with a burned bare tree next to it. Throughout, liberal use of white space with the outline of bricks supplies the best kind of canvas for Little Dragon, his flames and Mama Dragon.

Rendered in handmade papers and oil pastel on textured paper, digitally assembled and enhanced in Photoshop by Jim Averbeck, the illustrations convey a range of emotions on Little Dragon's face and in his body movements.  All the flames are realistically portrayed in contrast to the rest of the pictures.  The details of the Viking boat for his toy, a Viking helmet as the faucet head on the bath tub and the skull under the bathtub claw add to the atmosphere of the story.  The combination of all these elements adds up to a heartwarming tale guaranteed to bring smiles.


OH NO, Little Dragon penned and pictured by Jim Averbeck will have readers looking for their own special spark, a talent unique to them.  (It would be fun to list talents with a sound effect associated with each.) I can already hear the chorus of "read it again", as this title should be shared one-on-one or aloud with a group.  You might want to have flippers, a mask and snorkel handy.


Follow this link to the publisher website to see a couple of illustrations from the book.  This title was recently named to The Pennsylvania Center for the Book: 2013 A Baker's Dozen: The Best Children's Books for Family Literacy.  There is a link embedded in Jim Averbeck's name above to his official website.
Posted by Xena's Mom at 8:09 AM