Sometimes when you first see the work of an author/illustrator not only are you drawn to and inside a particular book, but it evokes an overwhelming sense of nostalgia.  Zachary's Ball (Candlewick, 2000)  and Mudball (Candlewick, 2005) written and illustrated by Matt Tavares took me back, way back to those summers of playing league softball.  It was the stance of the players, the expressions on their faces, and their passion for the game which, with little effort, had me on the field as third baseman, ready for action, Coach Bill Wadsworth on the sidelines calling out, keeping us all on our toes.  At barely five feet tall I was no home run hitter but the team bunt queen.  It was one of the best times of my life.

Matt Tavares's love of the game of baseball is evidenced by the publication of six titles, fiction and nonfiction.  The newest book, Becoming Babe Ruth (Candlewick, 2013) chronicles the earlier years of one of sport's best remembered figures.  In an interview Tavares states: 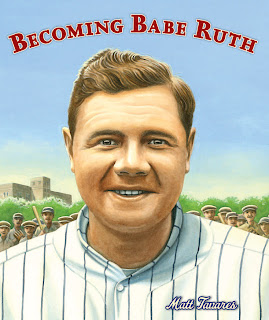 Most people think about Babe Ruth as a larger-than-life, almost mythical character.  I wanted to tell a story that showed him as a real person.


Baltimore, 1902
George Ruth lives with his parents
and his baby sister
in a tiny apartment above a saloon.

At the early age of seven, Ruth's parents felt they no longer had control over their street ruffian son.  He was taken to the Saint Mary's Industrial School for Boys, a place for orphans and those needing reforming.  The strict structure made it seem more like a prison than a school to the boys boarded there.

The saving grace for George was the boys being allowed to play baseball at the end of the day when their work was done.  From the first time he saw Brother Matthias hitting balls, sailing over the Big Yard into the trees again and again, a desire, a goal to be met, was started in his heart.  As time passed George acquired a talent as a shirtmaker at the school and as a skilled player on the baseball field.

Constant practice all year perfected his abilities, drawing attention to the now seventeen year old.  People came to watch him play, important people.  In 1914 George walked away from Saint Mary's Industrial School for Boys to play ball for the minor-league Baltimore Orioles.  He was nineteen.

His pitching was so exemplary, mid-season, he was sold to the Boston Red Sox, a major league player now.  From pitcher to outfielder, from the Boston Red Sox to the New York Yankees, Ruth's accomplishments were astounding.  Good news and fame followed him everywhere until 1920.

A fire swept through Saint Mary's Industrial School for Boys; hardly any buildings were left standing.  But the big hitter with a big heart had a plan, a special idea for fifty boys and Brother Matthias.  This act defined Babe Ruth, the man who never forgot from where he came, a man who not only made a name to be remembered in sports but in the minds of the boys attending Saint Mary's Industrial School for Boys.


Matt Tavares begins and builds his telling of George Herman "Babe" Ruth as his life's journey takes a significant change.  His research is apparent in the supplying of details; throwing stolen tomatoes at passing wagons in the streets, eating breakfast at the school in complete silence, number of strike-outs and hits at the school games, playing the big bass drum in the stands during a game, how he got the nickname, Babe, or buying ice cream for his special guests. These details are woven into the conversational narrative by a man who knows the sport and the art of good storytelling.  The technique of repeating one key phrase several times unifies the important events in a manner reflective of the book's intentions.  Reading those words lifts more than the ball into the air; it lifts readers' hopes.


With the matching jacket and cover, Tavares gives readers Ruth the man on the front and Ruth the baseball player on the back, a faded, worn and torn newspaper clipping.  All the illustrations are rendered in watercolor, gouache and pencil.  The two page dedication and title page are a clever replication of a room with rows of beds, we see only portions of the frames, a baseball signed by Babe Ruth on the covers of one.  The walls are filled with newspaper clippings taped in place, showing Ruth in action but also listing the pertinent information.


Tavares's full color pictures are a historical recreation of the era during this part of Ruth's life.  Movement, facial expressions and setting make the reader feel as though they can hear the crack of the ball on a bat, the excited talk of the boys, and the cheers of the crowds.  The warmth of Babe Ruth's character shines in his eyes.

Image size is altered between a single page, extending across the gutter, as an inset or two page spreads.  When a visual crosses the gutter it's edge appears as if it's an old newspaper, providing a column for the text on the opposite side.  One of my favorite illustrations is of Babe gazing out across the field after a swing of his bat, the crowds faded into the background.  The picture of Brother Matthias hitting the balls, when George sees him the first time, is stunning.


Becoming Babe Ruth written and illustrated by Matt Tavares brings to readers an entirely different aspect of this baseball legend.  It gives insight into the childhood molding the man.  It's not only an outstanding sport biography but a book filled with promise.

The book closes with an author's note, pitching and hitting statistics and a bibliography. For more information about Matt Tavares and his books follow the link embedded in his name above to go to his website.  Here is the link to an informative interview by Babe Ruth's great, grandson at Babe Ruth Central, Children's Author Matt Tavares on his new book: 'Becoming Babe Ruth'.  For an interview at Seven Impossible Things Before Breakfast about Matt Tavares's other titles, his art and process follow this link.
Posted by Xena's Mom at 7:20 AM