More than thirty years ago I sat in church on a summer Sunday morning listening to a sermon where a single sentence stated has stayed with me all these years, When you're through learning, you're through.  This was by no means a new proverbial thought, but to me, on that day, it was.  When you really stop to think about it, now more than ever with the advances in technology, not a day goes by without some new piece of information finding its way into the storehouses of our minds. 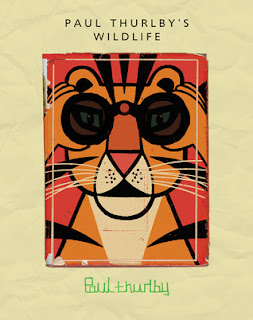 As much as I would like to think I know as much as possible about dogs, at least Labrador retrievers, I learned something new yesterday.  In fact I discovered more than twenty fascinating facts about individual members of the animal kingdom.  In 2011 Paul Thurlby debuted as a picture book author/illustraor (actually creating for all ages) with Paul Thurlby's Alphabet (reviewed here).  It garnered the Opera Prima Bologna Ragazzi Award at the Bologna Children's Book Fair 2013.  His 2013 title Paul Thurlby's Wildlife (Templar Books, an imprint of Candlewick Press) is, simply put, facts delivered with fun.

Hearing is a tiger's sharpest sense---five times stronger than a human's.

With that information laid before readers, we know there's absolutely no chance of tip-toeing up to one of these beautiful creatures.  We also realize the symphony of sound tigers must be hearing at any given moment.  If we can hear a mosquito buzzing somewhere near us, imagine all they can hear.

For the next twenty-eight pages a series of observations particular to a pictured animal are cleverly revealed to readers.  Green polar bears, masterful digging-machine moles, ever-watchful dolphins and fastidious rats roam these pages.  Flamingos can drink upside down? Male monkeys go bald?  Pigeons receive accolades from the army?


Each entry includes at least a single sentence with the animal's name in bold print beneath the illustration.  In varying font styles a well-known phrase relative to the fact is incorporated into the illustration.  All Ears is paired with the first sentence about the tiger's hearing.  Let your true colors shine through is matched with how goldfish get their orange shades.  Wet behind the ears introduces readers to the bathing habits of giraffes.


As he did in his first book the jacket unfolds to become a poster, featuring one of the illustrations in the book.  Zooming in on the fur of the tiger showcased on the cover, opening and closing endpapers are definitely on the wild side.  A faded golden-green version of the pattern provides the background for the identical jacket and cover.

Using his signature illustrative style Paul Thurlby provides a single page for each animal with the exception of the iguana, kangaroo, monkey, and worm, giving them a full two pages.  Bright, bold, textured and evoking a feeling of the past, each picture contains animation and varying degrees of humor.  As an example:

Bears sleep through the winter (without pooping!) for up to six months.

This is illustrated with a bear sitting on a white toilet against a tree in the forest, reading a book titled TAKE A BREAK, three rolls of Bear Butts brand toilet paper sitting on the lid.  Next to him is a smiling hedgehog holding a section of toilet paper.

Each reading is a visual discovery; more details become apparent.  The brand name of the lotion used by the goldfish, the kangaroo wearing karate attire, the spinning light and tiled floor for the bee and the shape of the lion's eyes.  The symmetry of the design begins with a boy holding binoculars to his eyes before the first tiger fact.  The book closes with another tiger fact (the tiger holding binoculars up to his eyes) and the final page is a boy seen through the lens of binoculars.


Clever, comic illustrations create the ideal invitation to readers to learn new information about creatures on our planet.  Paul Thurlby's Wildlife is one of those titles everyone will want to own.  It's a good thing, a very good thing, he sells prints of many of his illustrations.  They are most worthy of framing.  Get ready to share this repeatedly.

For peeks at some more of his illustrations head on over to his website courtesy of a link embedded in his name.  More of the artwork from this title is highlighted at Seven Impossible Things Before Breakfast.  Julie Danielson interviews him about this book at Kirkus.
Posted by Xena's Mom at 12:11 PM