If only we could turn back the clock; pick a point in time to revisit.  Those things we did or didn't do could be corrected.  Those things we said or did not say could be remedied.  Sometimes dialing back is not necessary; amends can be made.  Other times it's simply too late. 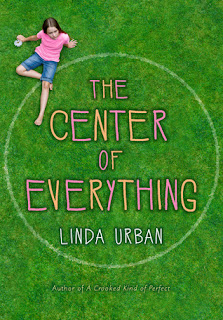 The loss of a loved one, whether it's expected or sudden, makes us feel not only extremely sad but strangely off-kilter.  All that we knew, the rhythm of our days, is missing.  In The Center of Everything (Harcourt Children's Books) author Linda Urban, opens the door of opportunity to find what has been lost; to have a wish granted in an extraordinarily ordinary way.


In the beginning, there was the donut.

As Ruby waits and watches for each portion of the parade to pass, we discover that unlike most of her family and friends, in the three months since her beloved grandmother, Gigi, has died, she can't seem to find the balance her life used to have.  There is a single moment weighing heavily on her mind and in her heart.  An occurrence in Mrs. Tomas's art class brings this into focus causing Ruby to wonder about doing what or talking like you are supposed to.

There is also the wish which could make all well again.  Tradition has it if you throw a quarter with your birth date on it on your birthday through the donut hole (on Captain Cornelius Bunning's statue) before the next Bunning Day has ended, your heart's desire will come true.  As fate would have it, on Ruby's twelfth birthday past, her quarter went through the hole.  So much is riding on what she has wished.

Her parents, an assortment of aunts, uncles and cousins as well as significant townspeople, teachers and schoolmates fill her musings of the past few days and the minutes prior to her reading her essay.  She thinks about what she has done and said.  She worries if her forever friend, Lucy, is still her friend.  She wonders if the new relationship with Nero is over.

When Linda Urban writes a book, this book, even if you feel its excellence at the first reading, it gets better when you read it again.  There are passages, single sentences too, that you want to copy on a piece of paper, fold up, place in a pocket and carry with you.  Her characters are so real you want to live in their town sharing the ebb and flow of their days.

Through point of view, alternating chapters between the past and present, the thoughts of Ruby and others with ties to the Bunning Day parade, Ruby's world unfolds before us.  We see our sixth grade selves in Ruby and her two friends told with clarity and humor.  We know and understand her sense of loss; it rings poignantly true.

There are many passages I keep replaying in my mind.  One is the conversation with her parents in the car on the way to the fireworks, The Hole Shebang.  Here are a couple more.

Ruby knows the speck that poked her too. It was the reason she still feels so sad when everyone else has moved on.  She had tried to forget about it, but today it reached out and poked her.
And she wishes there was a way she could reach back.

"You ever read Holes?" Nero asks.
Ruby nods.  "I loved it."
"I didn't read it for a long time. I thought it was going to be about a donut shop.  Once I found out it was about something else, I was mad that I hadn't read it sooner."
"I know," Ruby says. "You get this idea of what something is like, and that gets in the way of finding out what it's really like."
"Exactly." Nero looks straight at Ruby. She gets this feeling he's not just talking about books and that he's going to ask some sort of crazy Nero DeNiro question, and suddenly Ruby understands how all her teachers must feel, torn between curiosity and the fear of losing control of things.


Linda Urban's The Center of Everything, in the course of a single afternoon and evening slowly but with purpose, much like the character Patsy Whelk organizes the order in which parade entries will walk the parade route, reveals how Ruby Pepperdine looses her place and finds it again.  This is a beautiful story about loss, friendship, family and community.  This is a story to savor and share.

Please follow the link embedded in Linda Urban's name to her website.  Here is a portion of the beginning for you to read.
The Center of Everything by Linda Urban - Excerpt by Houghton Mifflin Harcourt
Posted by Xena's Mom at 8:07 AM