There is nothing that makes me want to roll around on the floor as much as a passel of puppies.  Even the presence of one will draw children (and adults) to it like metal to a magnet.  There's something about their eyes, ears, too big paws, little cold noses, chunky bellies and the wobbly way they walk and run, that's hard to resist. 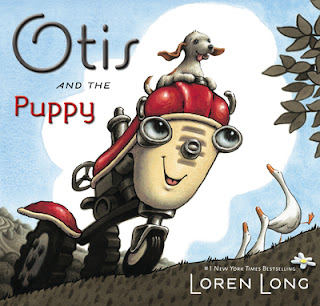 Apparently humans are not the only ones who find them to be perfect pals.  The champion of charm, humble and heartwarming little red tractor, Otis, is putt puff puttedy chuffing his way back into our reading lives with his newest title, Otis and the Puppy (Philomel Books, an imprint of Penguin Group (USA) Inc.) written and illustrated by Loren Long.  It seems the change in seasons is bringing more than usual to the farm.

It was springtime on the farm where the friendly little tractor named Otis lived.  The flowers bloomed, the trees were filled with leaves, and the farm buzzed with the joy of a new season.

During the day he and the farmer prepared the fields for planting but when their work was done the fun began.  Otis and his barnyard friends liked nothing better than a rousing game of hide-and-seek; especially when Otis was it.  Like a group of neighborhood children, they played until just before dark.

As they made their way to the barn one evening the farmer had something special to show them, a burlap bag.  As they watched it move and make sounds their curiosity mounted.  When they saw a puppy pop out, planting puppy kisses all around, their happiness grew and grew.

After everyone was in their places fast asleep Otis was awakened by puppy-in-distress noises.  Otis, clicking on his light, left the barn to investigate.  His new friend was not comfortable alone in the dark in the old doghouse.

Otis found everyone but the puppy.  All the animals and the farmer looked in every nook and cranny for the little guy until it was past-bedtime late.  Back at the barn Otis could not sleep knowing how afraid of the dark his pooch pal was.  He understood that fear; Otis was afraid of the dark, too.

What Otis wants to do is find his friend.  Otis wants to shine his light in the darkness, moving through the woods to rescue the puppy.  Otis wants the strength of friendship, his desire to do the right thing, to overcome his own fear.  Hide-and-seek skills, for one loving to be it, can come in handy in the nick of time.


Four years ago when Loren Long introduced readers to a friendly little tractor, barn red in color, who putt puff puttedy chuffed his way through a story full of heart, he gave us an enduring character, a home-grown hero you can't help but love.  Using simple, descriptive, almost lyrical, sentences with a pacing gently unfolding the story, readers enter life on the farm with Otis and his friends.  Word choice deepens the mood of the moment, the sense of emotions and the readers' attachment to the friendly little tractor.  Here are a couple of examples.

And then, as quickly as he had jumped out of the sack, he wobbled over to Otis, leaned on his tire, yawned, slouched, and plopped off to sleep.

Otis finished counting, peeled out, and motored here and there, putt, puff puttedy chuff, swerving and darting and skidding as fast as he could to find his friends.

Just inside the forest, Otis stopped dead in his tracks.  The sounds of the night crackled, thumped, and croaked all around him.


Unlike the two previous titles, Otis and Otis and the Tornado, with a more subdued color palette, this title's matching jacket and cover, a cloud for the highlighted background, is surrounded in a pale sunny blue; a sense of lightness, laughter even, shines forth.  The deep silver opening and closing endpapers showcase a single image of Otis on the move in white. The initial single title page, in white, shows the puppy stretched out curiously looking at a blue butterfly.  In contrast the two page illustration for the second title pages foreshadows the fears to be met with a night scene of the barn on the hill opposite the edge of the forest.

Using pencil and gouache Long's illustrations seem to have a luminous deep silver (of the endpapers) quality to them.  He shifts perspective and size fashioning a companionable flow with his narrative; single page, double page, smaller groupings with portions breaking outside the frame, or singular visuals unframed, surrounded by white for emphasis.  During the hide-and-seek game when the puppy becomes lost the narrative never states the distraction or what the puppy is doing; the illustrations tell a parallel tale.  There is a definite classic richness to Loren Long's work in the Otis books.


Whether you are a fan of the Otis books or not, Otis and the Puppy written and illustrated by Loren Long will have you falling in love with this friendly little tractor again or for the first time and quickly seeking out the earlier titles.  Everyone needs a friend like Otis.  When they read these books, he is not just the friend of the calf, the bull or the puppy but their friend too.