They're On The Case

I never go anywhere without a book; they are my constant companion and my best friend (except for Xena).  My purses are on the large side so I can always carry at least one (or maybe two) book(s).  Books educate, reaffirm, entertain and enrich me and my life.  Opening their pages removes me from where I am to the realm created by the written words. 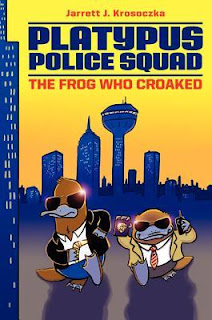 A few days ago I found myself unexpectedly sitting in a hospital emergency room...for two hours.  Within a matter of minutes I had taken Platypus Police Squad: The Frog Who Croaked (Walden Pond Press, an imprint of HarperCollinsPublishers) written and illustrated by Jarrett J. Krosoczka out of my handbag, opening the cover for the first time.  All the sights and sounds surrounding me faded away; a crime had been committed on the docks in the dead of night in a city familiar but unlike any I had ever known.

This is the city.  Kalamazoo City.  Population: 75,000. By day, it's a bright, vibrant metropolis, the kind of city where dreams come true. ...
But it is a different city once the sun goes down.  The criminal element, asleep by day, haunts certain dark corners at night. ...

With those sentences from the first page of the prologue, your attention has been captured.  Your sense of anticipation is heightened.  By the time the final thought has been read, an esteemed faculty member, Professor Hopkins, a frog of impeccable reputation, has vanished.

Apparently an illegal purchase of synthetic fish has gone awry; a duffel bag filled with the odorous critters is at the scene.  Why, you may ask, was a teacher down at the docks?  Why does his coat bear the tire tread marks of a car?

Rookie Detective Rick Zengo, still living at home with his parents in a rather affluent section of the city, arrives at Platypus Police Squad for his first day on the force.  His late grandfather Lieutenant Dailey's portrait hangs on the wall. He is a hero, having lost his life in taking down the biggest criminal at the time in the city, Frank Pandini, Sr., a diabolical panda if there ever was one.

His new partner is veteran Detective Corey O'Malley, whose physique shows his love of one donut or cupcake too many.  A family man, two sons, one in middle school, the other in high school, and a teenage daughter with a new boyfriend, living with his wife in a lower income, established residential area of the city, O'Malley is known for following procedures, slowly fitting the pieces of a case together.  He was part of the team that took Pandini, Sr. down.

Zengo's gut instinct tells him that Frank Pandini, Jr., philanthropist extraordinaire, savior of the city, is not all he purports to be.  It seems he has his "finger in every pie" in town; possibly the missing person case they have been assigned.  When an evening stake-out at Pandini's club, Bamboo, goes sour, Zengo and O'Malley are taken off the assignment and reduced to elementary school crossing-guard duty by an enraged Sergeant Plazinski.

Can the newly-formed duo put seemingly unimportant clues together to solve the separate but connected crimes?  Have they been served their last best root beer floats in the city?  Readers and the detectives find themselves surprised at the answers.  And the last four pages?  Let's just say...put your pedal to the metal, flip on the siren and put the light on the roof.  It's going to be a ride to remember.


In his debut chapter book, Jarrett J. Krosoczka has created a cast of characters with distinctive, memorable personalities; Zengo and O'Malley are a likable, admirable pair, old school clashing and collaborating with eagerness, their families are humorously normal, the sly reporter, a lizard, Derek Doherty is lurking and looking, the two loud-mouth, annoying detectives, Diaz and Lucinni, are a little short on brains, the gruff Sergeant Plazinski is sharp, quick to anger but also to praise, rolling with the circumstances and then there's Frank Pandini, Jr. and his lackeys who put on a good show but....  The plot unfolds through a fast-paced narrative, snappy dialogue and the atmospheric descriptions of place and time.  Readers are completely engaged through the listing of where the characters are and the exact hour and minute beneath each chapter designation.  Here are a couple of example passages.

Even during the daytime, the docks were dank and dreary.  Dockworkers carried crates off and on boats, and the air was filled with the sounds of distant foghorns.  Zengo wasn't used to this, having grown up in the heights, far away from the poorer areas on the east side of Kalamazoo City.  He shivered.  It seemed ten degrees colder by the water, not to mention the stench! It hit Zengo so hard in the face that he gagged.  It was the kind of stink that would linger on his clothes for days.

"Don't worry, rookie. Not everyone has forgotten." Something passed over O'Malley's face. "Oh, crud, this is our exit!"
Zengo clutched the passenger-side door as O'Malley veered across three lanes.  When the car finally straightened out, the skyscrapers in the side-view mirror receded as the sprawling upscale business complexes rose up ahead.
"Not sure who's a bigger threat to society there, partner!" said Zengo, straightening his shirt and jacket.
"Can it, rookie."


Krosoczka begins this book by illustrating opening and closing endpapers with the docks at night, the buildings of the city behind, the slightly wavy water in front, in blacks and grays.  The title pages cleverly display pertinent information on lighted billboards on building roofs.  Less than twenty-five two page spreads are without some type of visual done in tones of black and white; varying in size to enhance the text appropriately.  Each chapter begins with a full page illustration on the left.


Combining all the best elements from decades of mystery and detective literature and television Jarrett J. Krosoczka brings to middle grade reader in Platypus Police Squad: The Frog Who Croaked an action-packed first installment to what promises to be an exciting new series.  When these boomerang-carrying, crime-solving detectives are on the job no criminal is safe.  Readers (myself included) will be ready for the next episode as soon as the final page is turned.

Follow the link embedded in Krosoczka's name above to visit his website.  This link is to his Nerdy Book Club post, Penguins Are Done In This Town.  Access the Zengo and O'Malley Rookie Rules Activity Kit here.  If you want to read the first forty plus pages follow this link. Be sure to mark May 23, 2013 on your calendar for the virtual launch party; more details are here.