Receiving a Newbery Honor for The Wednesday Wars, author Gary D. Schmidt has penned another literary triumph, Okay For Now. As the central voice around which everything else revolves, Doug Swieteck, a character from The Wednesday Wars, tells his story.  This is by no means a sequel but more of a companion book as the author explains in the video clip below. 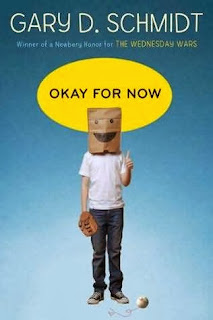 Undoubtedly due to my age I can remember going to libraries having copies of John James Audubon's out for patrons to use rather than under glass as is an original in this story.  You have to marvel about the mind that can imagine a tale using Audubon's masterpiece as a vehicle for growth and redemption.
Birds of America

Joe Pepitone once gave me his New York Yankees baseball cap.
I'm not lying.
He gave it to me.  To me, Doug Swieteck.  To me.

These three thoughts one reads upon opening to the first page.  Then your eyes drift back again to The Arctic Tern Plate CCL straight out of Birds of America pictured on the left.  It is a thing of beauty the way Schmidt brings those two seemingly incompatible elements together by the end of chapter one.

Using that cap we are introduced to his bullying brother, Christoper, his older brother, Lucas, serving in Vietnam beating up someone other than Doug for a change, his abusive father, My father's hands are quick.  That's the kind of guy he is., and his quiet Mom whose strength is initially demonstrated when told she can't take her potted perennial plants; she calmly does not get in the car and distributes them throughout the neighborhood.  As the three guys watch her move about this task Holling Hoodhood walks down the street bringing Doug a going-away gift, a New York Yankees jacket, Joe Pepitone's jacket that he had given him.  This gesture of kindness plays an important part in subsequent chapters.

The family is leaving for Marysville in the Catskills because Doug's father got fired.  His new job, obtained by his less than stellar friend, is at Ballard Paper Mill.  Doug hates this town and christens their new home, The Dump.  In a moment of freedom he explores the town following a girl into a building, his first visit inside a library.  Walking upstairs he sees a large room with a single glass topped table in the center.  Inside is...

A huge, huge book.  Its pages were longer than a good-size baseball bat.

The book is open to a single page.  Doug's perception of that illustration, The Arctic Tern, is so concise, so vivid that one wonders if he is describing the bird or how that bird is a representation of himself.  This portrait fans an ember long hidden in Doug.  He can not wait to go there again but on Monday finds that the library is only open on Saturdays.  But that girl, Lil is there.  He decides not to be so much like his brother Lucas.  He decides to be nice.  She gets him a job hauling groceries for customers in her Dad's store on Saturday mornings.

Each remaining chapter begins with a plate from Audubon's Birds of America.  Each of those plates foreshadows events, dialogue and depictions of time and place in 1968 Marysville, New York.  Those chapters are peopled with characters that become the kind of family that Doug needs.  Mr. Powell, one of the librarians, prompts and promotes Doug's artistic talent, an eccentric wealthy playwright, Mrs. Windermere who gives Doug a lesson in creativity with a capital C, Evelyn Mason, a grandmother type that everyone wishes for because of her kindness, Mr. Loeffler, an elderly gentlemen who makes Doug feel needed, the Daugherty family whose children adhere to Doug like glue and whose parents give Doug chances.

Beginning eighth grade in September at Washington Irving Junior High School, Doug's family extends from seemingly unfair Principal Peattie, to Miss Cowper, an English teacher with a gift for noticing those students that might fall through the cracks, brutal Coach Reed a Vietnam vet still suffering, and to Mr. Ferris a physical science teacher that can see the potential in all his students.

Woven into this fabric are a rash of robberies, a friendship that becomes so much more, a Broadway play debut, an fight for life, a damaged brother returning home, an elderly friend found in the most unlikely of places and most important is Doug's quest to find and return pages that have been cut from John James Audubon's Birds of America.  It seems that some things never change; money for keeping the library open is needed so pages are being sold.  One of my favorite quotes from the book is Doug's thoughts about this.

When I finished Okay For Now, I softly exclaimed wow and thought, I can't wait to read this again.  You become more than a reader, you shadow each and every person in their lives feeling hope, compassion, empathy, deep sadness, pride at their strength, disgust, perhaps forgiveness...but not quite yet and most of all love; love for all their humanness.

This is going to be a Newbery contender.  I'm not lying.