The Lure of Time Travel

Ruby Red, the first in a trilogy from German author, Kerstin Gier and translated by Anthea Bell (who translated at least the first two volumes of the Inkheart trilogy by German author Cornelia Funke) more than promises to keep readers engaged in the intriguing lives of sixteen-year-old Gwyneth Shepherd and Gideon de Villiers, her time traveling companion. 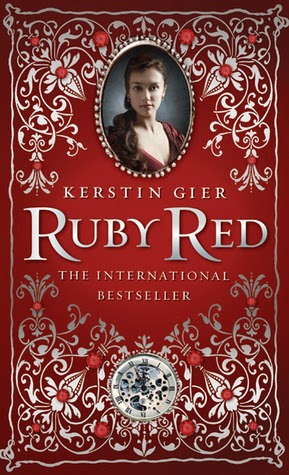 As she fell to her knees and burst into tears, he looked all around the park.  Just as he'd expected, it was empty at this early hour.  Jogging wouldn't be fashionable for a long time yet, and it was too cold for the beggars who slept on park benches with nothing but newspaper over them.

This is the mysterious, ominous first paragraph of the four page prologue to Ruby Red.  It generates in the reader questions of identity, purpose, and portends of secrets yet to be disclosed.

Moving to the present day we are introduced to Gwyneth, Gwen, for all practical purposes a normal sixteen year old woman trying to get through a day at school with best friend, Lesley.  Although normal by her standards might not be typical by others.

Gwen can see ghosts, in fact, James is a ghost who does not believe he has died, roaming the halls of the school which back in the day used to be his rather grand home.  And there is her quite eccentric family consisting of  Lady Arista Montrose, her grandmother, Glenda Montrose her aunt, Charlotte, her cousin, her Mom, brother Nick and Caroline her sister as well as Great Aunt Maddy, sister of her late Grandfather Montrose. Just names in print until the reader realizes they are all waiting for Charlotte to time travel for the first time.  Charlotte has spent her entire life training for this highly anticipated moment predicted at her birth.

To Gwen's consternation it is she who travels quickly three times back in time suffering harrowing episodes before she decides to let her family know.  Grace, her mother, sick with worry for her safety rushes her to the Temple, home of the secret society known as the Guardians.  There she must reveal her lies told at Gwen's birth; lies told to shield her from harm.  After the dust settles, Gwen's life is no longer conventional by anyone's standards.

What her cousin spent years learning Gwen must assimilate in hours; dress, language, mannerisms, defense skills and history.  Initially thankful that there is a mechanism, a chronograph, which can control where in time she and her newly met companion, Gideon, go, Gwen comes to understand very quickly that as the Ruby Red, she represents the last link of twelve needed to complete a circle.

Gideon has been traveling back and forth in time trying to get blood samples from other time travelers to replicate the power of the stolen second chronograph.  It was taken by Lucy Montrose, Grace's niece and Paul de Villiers who now reside permanently in the past.  Why they took it is a mystery whose solution is yet to be solved.  But what Gwen knows for sure is one, someone wants her dead, and two, she is falling in love with Gideon and he with her.

Finding humor in the situations presented by time travel, fear in the motivations of Guardians past and present, the lack of trust for anyone except her Mom and best friend, and the attraction of new love part of her novel abilities keeps Gwen and the reader on edge.

Kerstin Gier has a gift with pacing, partially exposed truths, and a true knack for character development that lifts this trilogy above others and will garner fans from across the globe.  Sapphire Blue and Emerald Green can not come soon enough for this reader.  I am waiting not so patiently to see if my theories are true.
Posted by Xena's Mom at 7:57 AM