Bold Bushy Brainiacs Are Back 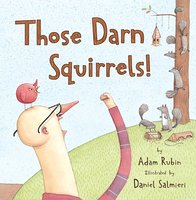 Every bird lover knows that next to birds nothing likes raiding the bird feeders more than squirrels. Author, Adam Rubin, and illustrator, Daniel Salmieri, each debuted into the world of children's books with Those Darn Squirrels (Clarion Books) in 2008.  The winning combination has returned with a worthy sequel, Those Darn Squirrels and the Cat Next Door (Clarion Books, May 2, 2011). 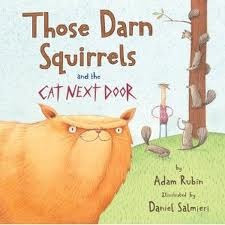 Old Man Fookwire, the epitome of grumpiness, still lives in a small aged house near a forest outside of town.  Earlier issues with the squirrels having been resolved, more to the satisfaction of the furry fiends than with Fookwire, manifest themselves in another form; invading his home during the cold days of winter.

They'd warm themselves by the fire and finish the old man's crossword puzzles....Then he'd shake his old-man fist and yell, "Those darn squirrels!"

She is oblivious to his deviousness.  When she delivers a tumbleberry pie to her neighbor, Old Man Fookwire, he hides behind the curtains, the squirrels hide in the drainpipes (cats scare them) and the birds hide in the chimney because everyone else is hiding.   Those darn squirrels hoover the pie and satiated scurry from the house only to be pounced upon by Muffins.

Wet willies, noogies and wedgies are the new order of business for the squirrels, birds flee terrified and Old Man Fookwire's painting is disrupted.  The intrepid bushy-tailed, bouncing lovers of cheese puffs and ginger ale hatch a plan; a perfect plan.  And everyone lives happily ever after except the cat, that is.  For some reason Muffins never leaves the house next door again.

As he did in the first title, Daniel Salmieri using watercolor, gouache, and colored pencils, creatively compliments Rubin's hilarious narrative.  Skinny legged humans with exaggerated facial expressions that illuminate their respective personalities, scampy squirrels displaying ingenuity that trumps the wildest imagination, birds colored and shaped as if from a land of fairy, and a cat with a grin like "Jaws" provoke loads of laughs.

You will never look at those darn squirrels in quite the same way again, ever.
Posted by Xena's Mom at 8:12 AM