I am without a doubt, with no apologies given whatsoever, a dog person through and through.  There are life-size paw prints on my mailbox, a ceramic sign on my front walkway proclaiming "Home Is Where The Dog Is" and my family photos are of my canine companion, Xena. 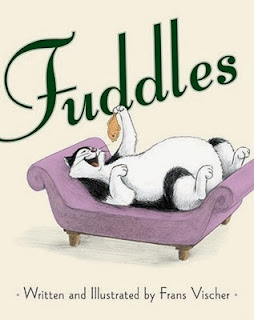 But I have to say that when browsing through a local bookstore earlier this summer, spotting Fuddles written and illustrated by Frans Vischer, I cracked up laughing.  You may not be able to judge a book by its cover, but it sure will get your attention.   Seeing that chunky cat lounging on his personal purple settee dangling a fish over his grinning mouth was a definite draw.

These first few phrases coupled with illustrations showing Fuddles under the hair dryer, nails being clipped, being pushed in a stroller, soaking in a bath and hanging in a hammock are enough to up the grin factor.  Contemplating his life though, Fuddles discovers that he pretty much just eats, sleeps and visits his litter box.

What this feline finds is that he longs for adventure; change is good, right?  To his dismay when he heads for the door he is told, in no uncertain terms, that the outdoors is forbidden.  He can't understand that he, Fuddles a fat cat in more ways than one, is being told no for the very first time.  Being no different from many no really means why not; he is determined to meet and conquer this challenge.

A strict, well sort of, training program begins while waiting for the right moment...Like a cheetah chasing a gazelle, he made his speedy getaway.  Once outside his lack of true training creates one unfortunate incident after another with those annoying birds, hilarious squirrels and a big scary barking dog the size of a horse.  Giddy-up!

Night descends as Fuddles wanders the neighborhood lost, needing a litter box and something to make his stomach quit grumbling. Will this frightened fur ball find his family?

Frans Vischer's graphics for Fuddles, his first picture book, are digitally rendered.  From his early youth Vischer was drawn to cartoons and drawing was a vehicle to communicate when his family moved to the states from Holland.  In 1981 he became an animator for The Walt Disney Company.  To his credit are
such films as The Princess and The Frog, Who Framed Roger Rabbit?, Cats Don't Dance (Warner Brothers) and The Road to El Dorado (DreamWorks).

As readers turn the pages a varied format greets each phase of the tale.  From full page spreads bleeding off the page to several smaller vignettes to even a two page spread at night, each extends the author's narration.  Humor is injected everywhere.  When sharpening his hunting skills he is really climbing a stool playing with a toy mouse but a thought cloud shows him leaning over a cliff to snag a big fish.  Fuddles' facial expressions alone are guaranteed to produce a load of laughs.

While this book will never convince me to go over to the "other side", I love to laugh, especially with my students.  I sincerely hope that Fran Vischer has more adventures for Fuddles in the future.


Follow this link for a cute word search puzzle at the Simon & Schuster web site.  Be sure to click on the other links to learn more about Fuddles and author/illustrator Frans Vischer.
Posted by Xena's Mom at 6:52 AM