A Matter of Life and Death; Light and Black

Much as he did in his Pendragon series, D. J. MacHale takes readers into worlds that are so unique, so believable, so detailed that they must be real; they can't really be fiction can they?  His Morpheus Road trilogy that began with The Light (April 20, 2010), which I featured in the Middle School Book of the Week, follows sixteen-year-old Marshall Seaver into what he figures must be madness.  Two years earlier his photographer mother was killed on assignment by an earthquake, his best friend Cooper Foley is missing, a graphic character of his own creation, The Gravedigger, has come to life trying to kill him, people are turning up dead and Marshall has no doubt that ghosts are real.  He is being haunted by a powerful and deadly being.

Life in Stony Brook, Connecticut has crossed the line of normal into the creepy, frightening world of the supernatural.   With the help of Coop's sister, Sydney, Marsh gathers clues desperate for answers; until what can only be described as a downright nail-biting, horrifying ending leaves him barely alive with more questions than answers.

Check out these two videos about The Light, one a trailer and the other D. J. MacHale's discussion of the Morpheus Road books. 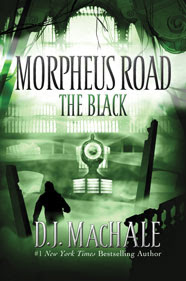 In book two, The Black (April 19, 2011), MacHale changes the point of view to Cooper.  Coop has landed in Trouble Town, big time, as a traveler on the Morpheus Road, a bridge between the living and the dead.  We see Marsh's tension filled trials from his turbulent week from the other side.  People that he never thought he would see again, people from the near and distant past, and places and images from each person's vision create a landscape that Cooper can hardly comprehend.

I shook my head and turned to the guy who had just come in.  He walked deliberately, like an old man with sore joints.  "I figured on finding you here," he said.  "Either here or that place with the french fries.  Never cared for 'em myself.  Too greasy."  My head was spinning.  The guy knew me.  "This is much better," he said.  "If I had a nickel for every ice cream I bought you here, I could buy the place out myself."  The guy sat down on the stool next to me and I got my first good look at him.  It was the best possible person I could have hoped to see...and the worst.  He was my favorite person in the world.  The old lady called him Gene.  That was short for Eugene.  Eugene Foley.  My grandfather.  "Close your mouth, Cooper.  You look like a trout."  Seeing my gramps made me want to throw my arms around him and hug him like I was six again.  Only one thing stopped me.  My grandfather was dead.

There is a war looming on the horizon in a world outside of our reality; a war started by a force from the time of Alexander The Great, that threatens to rip apart the tenuous threads that hold humanity together.  Damon, a general from ancient times with an appetite for murder and his enemies, literally, is mounting his forces seeking to destroy the crucibles and gain power of the poleax.  Damon needs Cooper.  Cooper needs to protect Marsh from Damon.  Marsh and Cooper must find a way to unite or existence as we know it will be crushed.

With communication between their two worlds shaky at best Marshall, wondering how he landed  in the Mother of all nightmares, and Cooper, racing against time seeking to understand his new existence plagued by guilt, redemption and Watchers, journey in these tension-filled thriller adventures that will have readers looking over their shoulders.  MacHale's handle on character development and their dialogue couldn't be better executed.  Eerie, descriptive scenes right out of the Twilight Zone or an Alfred Hitchcock movie raise the bar on a reader's breaking point; making them torn between putting the book down for a breather or gripping it even tighter, continuing desirous of a conclusion.

The final chapter in this trio is highly anticipated.  Follow the link to D. J. MacHale's web site above.  He has much to offer readers in addition to his books; games, videos and downloads.  Enjoy!
Posted by Xena's Mom at 7:15 AM