Into A World of Dragon Power

For close to forty-eight hours I have been held captive within The Empire of the Celestial Dragons, a realm, drawing inspiration from Chinese and Japanese cultures, created by the imagination of author, Alison Goodman.  The sequel to Eon: Dragoneye Reborn and concluding title, Eona: The Last Dragoneye, is every good as its predecessor if not better.

Twelve dragons bearing animal's names from Chinese astrology each seated at a compass point guarding lands in those directions bring harmony and balance to the elements.  For centuries these dragons have melded with human male Dragoneyes preserving the land and people and protecting the Emperor.

Eon was saved from slavery in the salt mines to be trained as a Dragoneye.  She and her master keep her true identity secret; it would mean certain death, this violation of tradition and law.  In the arena Eon is chosen by the Mirror Dragon.  Five hundred years have passed since the last Mirror Dragon came to the circle.  This choosing sets events in motion previously only mentioned in prophesy.

Secrets, betrayal and death certainly intensify the tension, twists and thrills that beset the characters of power-mad Lord Ido, Rat Dragon Dragoneye, Dillon, apprentice to Lord Ido, Kygo, the rightful Pearl Emperor, High Lord Sethon, Kygo's uncle and Lord Eon(a) as they are joined in a battle to preserve the peace of The Empire of the Celestial Dragons and the dragons themselves.  Thus ends book one.

The dragons are crying...begins chapter one, book two.  Lord Eona, Mirror Dragoneye, has revealed that she is not a he.  Close allies no longer give her their complete trust; this deception has shaken them completely.  Lord Ido has been imprisoned by his partner in crime, the sadistic High Lord Sethon. 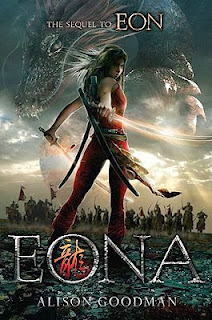 So new as a Dragoneye, Lord Eona can not control her dragon power.  Each time she enters the spirit world ten dragons seek to overwhelm her.  Eona needs Ido to train her but can he be relied upon to keep a bargain?  The resistance grows across the land but they are outnumbered by the members of High Lord Sethon's army.

All seek the black folio and the truths within its pages; the binding power it offers over Dragoneyes, dragons and the empire.

Will the tragic triangle of five hundred years ago be repeated between Eona, Kygo and Ido?  Much weighs in balance with choices that require unthinkable leaps of faith.

Alison Goodman writes of natural and supernatural power gone wild, brutal battle scenes replete with  incredible displays of skill, political intrigue and steamy love, some true and other manipulative, set among a landscape of coastal villages, mountain fortresses, a ship at sea, desert panoramas and palace grounds.  Her graphic descriptions draw readers into the core of The Empire of Celestial Dragons.

A wide semicircle of soldiers had broken out of the woods, all carrying Ji, the hook-bladed pikes braced for attack.  They were no more than one hundred lengths away and moving with wary speed.  I heaved on Dillon's hand, but he had dropped to his knees, a shrieking anchor.  I felt the gusty wind flex into the heavier muscle of the monsoon, its brutal strength knocking me back a step and stealing my breath.  Before me, the grass flattened and the trees bowed in obeisance as the gale brought the first drumming drops of rain.  A panic of starlings burst out of the trees and spiraled upward, turning in a sharp arrow ahead of the wind.  I gasped as the sudden rush of cool water streamed against my hair and face, its weight stinging my skin and scalp.

Once part of the magnetic Empire of Celestial Dragons readers will be reluctant to leave it, the enriching, colorful, and at times horrifying lives of its characters nor the majestic, divine dragons themselves.

By my recommendation older middle school readers on up will be enthralled with the writing of Alison Goodman and her Eon: Dragoneye Reborn and Eona: The Last Dragoneye.  Her web site link above offers much more information about these books and her other noteworthy titles.
Posted by Xena's Mom at 9:14 AM