Adoration of Saint Francis of Assisi

Saint Francis of Assisi was canonized in July of 1228 less than two years after his death; evidence of his great influence and popularity in the Roman Catholic Church.  Pope John Paul II acknowledged him as the patron saint of ecology in 1979.  One of his more popular writings, a song, The Canticle of the Creatures, is a reflection of his belief that all nature is a mirror of God. 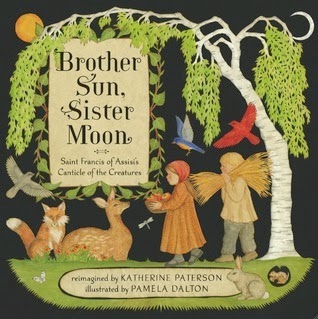 His The Canticle of the Creatures has been reimagined by author Katherine Paterson in a book titled, Brother Sun, Sister Moon.  Paterson is the current National Ambassador for Young People's Literature. Sixteen of her titles are award recipients including the Newbery Medal twice, a Newbery Honor award once and the National Book Award twice.


In an author's note Paterson states when Saint Francis of Assisi originally wrote this work he did so in the local Umbrian dialect (Italy) rather than the more formal language of Latin used in the church.  He wanted everyone to share in his love of creation and God.  Making reference to the classic four basic elements of air, water, fire and earth as well as viewing the sun, moon, and even death as a sibling, Saint Francis gives praise and thankfulness to the Lord most High.

Paterson with a background in missionary work takes the translation from the Umbrian text of Bill Barrett using her uncommon gift with words to reaffirm and renew readers' appreciation of Saint Francis, to reveal the strength of her beliefs, to celebrate the world in which we live and the lives of all that share this common ground.  Please compare the two and you will understand just exactly what a jewel this reimaging truly is.

Paterson reimagined---We praise you for Sister Moon and all our Sister Stars, who clothe the night with their beauty and, like you, watch over us while we sleep. ... We praise you for our Brother Fire, whose strength warms our homes and in whose resplendent dancing light we glimpse your playfulness.


Katherine Paterson also reveals in her author's note that it was in seeing examples of Pamela Dalton's work that she felt inspired to try to reimagine this song of praise of Saint Francis of Assisi.

Pamela Dalton has illustrated Brother Sun, Sister Moon using the technique of Scherenschnitte.  Scherenschnitte is said to have it origins in China but it traveled to the European continent becoming known as  the cultural folk art of the Swiss, Dutch, Polish and Germans.  Scissor cutting of paper was brought to the United States when the Germans settled in Pennsylvania seeking freedom of worship.  In this particular method of papercutting symmetry is prevalent.

For more than twenty-five years Dalton has experimented with and perfected this form of papercutting.  Using a single sheet of paper for each design that graces the pages of this book painting each with watercolor, she lifts the words of Paterson to new levels of beauty.  It is simply amazing how the framing images maintain an identical balance left and right but the center sections reflect a truly detailed interpretation of the song.  Vivid, stunning colors against the rich black background draw in the reader's eye while creating a desire to reach out and touch them.  This is Pamela Dalton's first book for children; astounding.

Two marvelously skilled artists, one with words, the other with paper and scissors through their collaboration bring honor to Saint Francis of Assisi and his The Canticle of the Creatures with their book, Brother Sun, Sister Moon.