Without Words...Pictures Say It All

Beginning in 1992 with Charlie Parker Played Be Bop, Chris Raschka has a long list of noteworthy books bearing his illustrations as well as those he has penned himself.  As mentioned previously on this blog in 1994 his book, Yo! Yes? received the Caldecott Honor award.   Hello, Goodbye Window written by Juster Norton illustrated by Raschka won the Caldecott Medal in 2006.  In March 2012 the world will know what his nomination as the United States representative illustrator for the Hans Christian Andersen Award will reveal.

A Ball For Daisy, a wordless picture book, by Chris Raschka done in ink, watercolor and gouache is beautifully brilliant.  Using the bold basic blue, yellow, and red of an artist's palette, black and brown softened with grays and washes, Raschka conveys with every stroke of his brush personality, emotion and story flow. 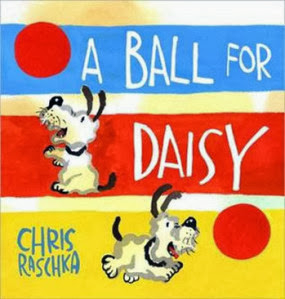 As soon as readers are introduced to Daisy we get a sense of her playful exuberance and innocence with that wagging tail and doggy smile.  Awake or sleeping her red ball is her favorite thing; her constant companion.  The two are in continuous motion except when they rest upon Raschka's two tone green striped sofa; his combination of two of the predominant colors.

I absolutely love the sequence of pictures when Daisy is sleeping on the sofa, she at one end and the red ball at the other.  She awakens, yawns and looks straight at the reader as if saying, "What am I doing away from my ball?"  She moves next to her round friend and continues her nap.  It is perfectly precious.

One day her little girl takes this little white bundle of happiness and her ball for a walk to the park.  During a game of throw and fetch the ball goes over a fence.  When her girl brings it back another dog, a brown dog gets the ball before Daisy.  Again she glances at the readers, eyebrow lifted, asking with unseen words, "What gives?  What is this intruder doing with my ball?"  Daisy is not happy and before she gets her most favorite thing in the world back---it pops!

Raschka's two page spread of eight square washes shows a range of feelings and reactions from Daisy at this dilemma; cocking her head, listening, looking, shaking the red pieces, howling and utter sadness.  Crestfallen head hanging Daisy and her girl leave the park.

Daisy does not know how to get comfy for her nap without her ball despite consolation from her girl.  Raschka uses a purple wash just this once to convey Daisy's downheartedness.

The next day on their walk to the park Daisy and her girl are met by the other girl and the curly furred brown dog.  To Daisy's delight there is a new ball, a blue ball.  Nothing could be better than a new ball and a new friend; when one door closes there is the opportunity of another to open.

Mr. Chris Raschka, your distinctive artwork lends itself to redefining wordless picture books.
Posted by Xena's Mom at 9:09 AM