Of Monarchs, Magic And Maliciousness

Many of us have listened to or read fairy tales for most of our lives.  We hear the words "once upon a time" and open our hearts and minds to familiar settings unlike our own, characters who cause terrible troubles and others who overcome great obstacles, and magic making an appearance when we least expect it or thankfully when we long for it.  Most people regardless of their age will be familiar with the young woman who has lost one or both of her parents and is under the control of a wicked stepmother and her two daughters.  They feel a kinship with her every hardship and cheer with a sense of justice and relief at the outcome. 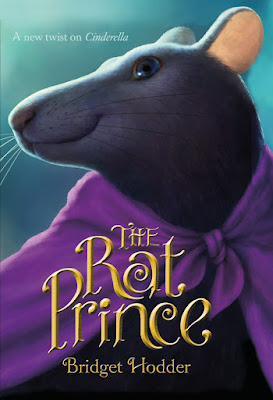 Most will not know the original Cinderella is believed to have come from China more than one thousand years ago.  Since that time stories with the same motif have come from countries around the world each with a specific set of elements; each a mirror of the culture and people. Variants have been told and written with their own particular twist but keeping the essence of the original narrative.  The Rat Prince (Margaret Ferguson Books, Farrar Straus Giroux, August 23, 2016) a debut novel written by Bridget Hodder puts a wondrous spin on the tale, taking seeds from the story and growing it into something entirely her own.

Prologue
When you hear the tale of Cinderella, do you ever wonder about the rats who were turned into coachmen by her fairy godmother?
No?
Then do take a moment to consider.

Prince Char begins speaking to us about his observations as a royal rodent at Lancastyr Manor where generations of rats have been bound to the human occupants.  Rose de Lancastyr is the beautiful daughter of the late Lady Jane and the current Lord Lancastyr.  Due to her father's declining mental health, a stepmother and her two daughters now occupy the residence with her.  Prince Char and his royal councillor and best friend, Swiss, initially believe her to be kind but a total lackwit.  An encounter in the kitchen with her stepmother Lady Wilhemina, completely changes this assessment.

Of the two stepsisters, Eustacia and Jessamyn, nine-year-old Jessamyn is the more compassionate.  Rose, Cinderella, is her best friend.  We and Jessamyn discover at the same time of the unusual relationship between Cinderella and two rats who she has named Blackie (Prince Char) and Frump-Bum (Swiss).  Cinderella discloses to her stepsister of the generosity of the rats in bringing her food when Lady Wilhemina refuses her dinner.  Blackie has surprisingly enough given her, during a night of great sadness, a large sapphire ring.  Etched in the face is the Lancastyr seal.  Blackie comes close enough to Cinderella for her to pet him.

On the morning of the great ball Prince Char and a group of trusted companions leave their Northern Rat Realm, venturing into the Southern Rat Realm, ruled by Princess Mozzarella, to enter Castle Wendyn, home of Prince Geoffrey.  They have to see if he will make a proper ruler and husband for Cinderella. Even the Rat Prince's mother, Lady Apricot, sees the wisdom in this move, although rats rarely involve themselves in the affairs of humans outside Lancastyr Manor.  In their way of thinking if Cinderella is queen, Lady Wilhemina will be removed.  With her absence goes the rat poison which has killed many.

It seems Cinderella will be allowed to go to the ball until the truth strikes her like a blow. What will she wear? When she arrives in her room, a pitiful place in the attic, several surprises await her.  Of these I will only say one offers her an opportunity and the other offers her an explanation.

Two individuals need to accomplish their goals; saving what is loved most.  Words need to be said but cannot be uttered.  As the clock ticks toward midnight the action is twisting and turning in all directions.  Readers will wonder what awaits each and every character.  The characters scarcely breathe themselves as each minute reveals one shocking bit of news after another.  As the twelfth stroke echoes, the past collides with the present.  It is indeed memorable.


To have imagined and written this novel of Cinderella, author Bridget Hodder is clearly a scholar of fairy tales, reading them and enjoying them with true affection.  Page by page as her version unfolds readers can see items from other known stories of Cinderella making an appearance, not necessarily as we expect them to but in a much grander perspective.  She takes what we know enhancing it; enlarging the narrative with wholly, beautifully believable stories within a story.  An example of this is the two stepsisters.  To have chosen one of the sisters to be younger and kinder figures more than once at critical points in the plot.

Another storytelling technique employed by Hodder is to have this portrayal spoken not be an unseen narrator but in first person (rat) voices in alternating chapters.  We start and end with wise Prince Char, taking turns with a determined and resilient Cinderella.  Whether they are in the same setting or a different place in the kingdom of Angland, each chapter flows flawlessly into the next.  We easily bond with the thoughts of the young woman and the rat.  We are able to ascertain the personalities of each character, primary and secondary, (usually) by the conversations throughout the story.  There is not a wasted moment as we speed toward the conclusion in classic page-turner style.  Here are some selected passages.

It has a carving on it," my stepsister breathed in awe.
"The seal of Lancastyrs," I said.
Together, on the same impulse, Jessamyn and I raised our eyes to look over at the rats.
They were nearer now.
Blackie's dark gaze on me was so intent, I would almost swear he understood what I'd said.
"But where could the rat have gotten such a thing?" Jessamyn demanded. "Wait.  You're merely teasing me, aren't you?  Oh, Rose, how could you?"
"I'm not teasing!  Blackie gave me the ring.  And every time I feel discouraged or tired or hungry, I touch it, and somehow it gives me the strength to carry on."
"Don't let my mother see it," Jessamyn said, in her wise little voice.
She was right, of course.  I tucked it away again, out of sight.

I wanted to nudge Rose's arm and tell her not to fear---if her stepmother were ever to steal the ring, I would get it back.  Believe me when I say there is nowhere a rat cannot go, and there is certainly nowhere Lady Wilhemina could have hidden the ring where I wouldn't have found it.  We rats had cherished the shiny golden thing for more than a century, ever since Prince Gravy, a most canny rat-ruler, nicked it from the bedside table of a slipshod Lancastyr ancestor, Vern the Vapid.

Swiss was looking at me with reproach in his eyes.  "You have yet to explain why you gave our greatest treasure to a human."


The Rat Prince written by Bridget Hodder is a Cinderella variant which I gladly devoured in a single sitting the first time and savored passage by passage the second time.  The tale is told with such excellence you can readily regard it as the true version.  This book is most definitely one to be read by those who crave fairy tales.  It is so much deeper and broader; I would highly recommend it to anyone who loves a great story.