It is said long, long ago there was a great fire in the land now known as Wisconsin.  Hoping to flee the fire, Mishe-Mokwa urged her two cubs into the vast waters of Lake Michigan.  The three of them swam with all their strength, the parent urging the two younger bears to keep going.  The great bear swam for many days until she reached the sandy shores of Michigan.  For a very long time she waited, watched and swam out into the waters seeking her two children.  Not far from where the mother waited but too far for her to see, the two cubs, exhausted from swimming, had drowned.  In his compassion Manitou, the Great Spirit, caused the mother bear to sleep forever.  As a sign of her love for her cubs and his love for her, he raised the younger bears from the water creating two islands, South Manitou and North Manitou.  He spread sand to comfort and blanket the waiting mother bear forming the Sleeping Bear Dunes. 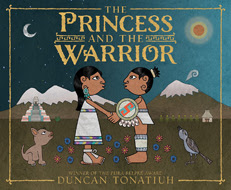 We have folklore from cultures throughout the planet to explain hauntingly beautiful natural wonders.  Acclaimed author illustrator Duncan Tonatiuh (Funny Bones: Posada and His Day of the Dead Calaveras) presents his interpretation of a legend regarding the origin of Iztaccihuatl and Popocatepetl, two volcanoes found near Mexico City, Mexico.  The Princess And The Warrior: A Tale of Two Volcanoes (Abrams Books For Young Readers, September 20, 2016) is a story of a great and enduring love.

Once upon a time, there lived a kind and beautiful princess named Izta.

Her royal standing did not keep her from mingling with the people in her father's kingdom. She could be seen walking among them, teaching them poetry.  Although many young men appeared before her promising her all manner of riches if she would marry them, none pleased her.  It was a soldier named Popoca who claimed her heart promising

Her father did not want her to marry a warrior but in his wisdom he recognized the skill of the man.  He proposed an arrangement.  If Popoca could defeat a fearsome enemy of their land, Jaguar Claw, with finality, then Izta and Popoca would be allowed to wed.  This was not an easy task.  The warrior and his men fought battle after battle sometimes wondering if they would win.  The thought of Izta instilled bravery in Popoca which his men could see.

Cunning to the core, Jaguar Claw sensed a defeat in his future and masterminded a horrible plan.  One of Popoca's loyal soldiers was not so steadfast that he could not be swayed.  This soldier went to the princess telling her the worst kind of lie.  He offered her something to soothe her soul.

Returning home victorious, Popoca was shocked by the words spoken by the emperor and even more distraught by what he saw. With hope in his heart the warrior took his princess from her home to a mountain top.  A promise was fulfilled.


For generations listeners and readers have been intrigued and moved by stories of deep and abiding love.  As soon as Duncan Tonatiuh writes once upon a time we can feel magic settle about us.  He immediately connects us to Izta with her affection for the common people and her ability to value the richness of a person's inner self over material wealth.  In the same way we find ourselves inwardly cheering for Popoca due to his warrior status.

Told in a blend of narrative and dialogue we are invited into the lives of these characters of legend. When Tonatiuh uses words from the Nahuatl language within this tale he builds a cultural and historical bridge.  His sentences are not elaborate but carry a storyteller's cadence.  Here is a passage.

"Cool air will surely revive her," Popoca told the emperor.  He carried Izta through the throngs of villagers, who wept as they passed, past the milpas, and all through the night to the top of a tepetl.


Drawn by hand and then digitally colored the artwork in this title evokes a timeless quality, a tribute to the Mixtec codices. In an author's note Duncan Tonatiuh says: Readers may notice how in my drawings as in the ones from those codices, people and animals are always drawn in profile. The muted earth tone color palette is a signature of Tonatiuh's work.  The front of the dust jacket contains many elements referencing portions of the story; the volcanoes, a royal residence and a commoner's home, and the moon and sun representing all time.  The title text and framing are in gold foil.  On the book case a single illustration covers it in its entirety.  It is a close-up of the warrior on the left and the princess on the right gazing at each other, a bird soaring between them and the sun on the horizon.  The opening and closing endpapers are patterned in two kinds of flowers and a single snowflake.

Of the images in this book only six are on single pages; the remainder are remarkable two-page spreads.  Those six visuals signify turning points in the tale.  Each one asks us to pause.  Each one is filled with emotion.

Distinctive lines define facial features and body shapes.  The clothing, tools, homes, jewelry, hair styles and weapons reflect the period and people.  Regardless of the powerful text, the pictures tell a story all their own.

One of my favorite illustrations is the first one in the book.  On the left we see a row of corn growing as a worker sows more seeds.  On the right villagers sit at the feet of Izta listening to her speak about poetry.  A soft circular cloud comes from her mouth, Tonatiuh's symbol for speech.


The Princess And The Warrior written and illustrated by Duncan Tonatiuh is a lovely rendered retelling of a cultural legend.  It crosses time, generations and cultures with its universal motifs.  This book is highly recommended for your personal and professional book shelves.  In addition to the author's note at the end, Tonatiuh includes a glossary and a bibliography.

To learn more about Duncan Tonatiuh and his other work, please visit his website by following the link attached to his name.  At the publisher's website you can view an interior image.  At TeachingBooks.net there are several resources, two audio and two written items about this particular title.  At the time of this writing you could access all of them.  Duncan Tonatiuh chats with Alia Jones, bookseller and student of anthropology, at Read It Real Good.