There are those things which make perfect sense but they're not lodged in our minds until one singular moment of clarity.  From that time forward we can replay the particular event in perfect detail or listen to a phrase as if it's a mantra.  It can define who we are.

Following a completely different train of thought, perhaps you've read about something.  You've heard it discussed.  You've seen it in person.  Until you experience it yourself, the truth of it does not fully register.

For me the event was a Sunday sermon.  The words spoken were "When you're through learning, you're through."  What I had read about, heard about and even seen was the unbreakable connection between a dog and their human.  It was not until I spent more than fifteen years with a constant canine companion that I fully understood how much learning could be shared. 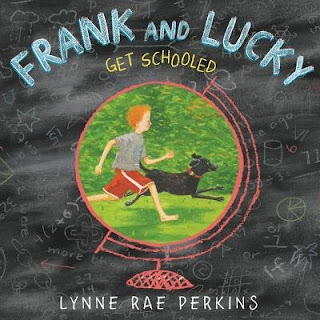 It's hard to say who is the more fortunate, a dog or a human, when they first meet and their lives become entwined.  Frank And Lucky Get Schooled (Greenwillow Books, an imprint of HarperCollinsPublishers, June 14, 2016) written and illustrated by Lynne Rae Perkins presents a totally new perspective on life's lessons courtesy of one pooch pal.  It's an unforgettable educational approach.

One day when Frank could not win for losing, he got Lucky.
And one day when Lucky was lost and found, he got Frank.

This was the beginning of true learning for one dog and his boy.  It could be said it was love at first sight.  It could also be said running like the wind and consuming mass amounts of food were traits they held in common.

From that time forward subjects normally taught within the confines of a classroom setting became everyday facts of life for the duo.  Lucky's curiosity lead to several lessons in science.  A romp around their property taught Frank about plants as he was removing burdock from Lucky's fur.  And the skunk incident guided us to not one but two new branches of science.  Astronomy was one of them. (I'm not divulging any more than this.  I'm laughing too much.)

Of course back on the topic of food math came to mind.  This did in fact involve a dreaded story problem but the results were a canine idea of heaven on earth.  Biscuits might have been mentioned.  An examination of Frank's bed at night revealed with accuracy an exploration of fractions.  With surprising insights math (and yes, food) took us to history.

The relationship of dogs and humans and some famous dogs coming to the rescue of humans were noted with the creation of drawings and monuments.  These circumstances happened on various dates in the timeline of human history.  In the case of Lucky and Frank the past was moments ago and it certainly demonstrated there could be more than one interpretation of the truth.  HA!

With ease and the help of the family cat, Lucky influenced Frank's art assignment.  With a change in perspective, a dog's silhouette appeared on the horizon line of the family acreage.  If you will recall running was a shared interest of the twosome.  When Lucky decided to take off and explore without Frank, geography and maps became important.  What developed next was unexpected.  But that was and is when the best subjects are learned; some of them lasting a lifetime.


No matter how many times you read this book, you will marvel at the thought process involved in creating this narrative.  If you've been lucky enough to have a dog share their life with you, you'll wonder why your mind did not make the fabulous connections found in this story written by Lynne Rae Perkins.  From personal observations this gifted author links classroom subjects to real life with a great deal of humor.

From science to math to history to art to geography and maps and to the final subject this tale flows seamlessly causing readers to realize, if they did not know it before, how intricately woven together everything is.  Perkins's sentences are conversational, easily understood and enlightening without being, even for a single second, dull.  That's the way life with a dog is...never dull...always illuminative.  Another technique Perkins employs is the blend of an unseen narrator, thought bubbles, and speech balloons for dialogue.  Here is a sample passage.

In Reading, he was best at the listening part. He could listen
more than anyone else in the family.  He could listen for hours,
even when Frank wasn't reading aloud.

How much more could he listen? How many hours?

Wait a minute---aren't those Math questions?


Pen and ink and watercolor paint were used to prepare the full-color art we see on the matching dust jacket and book case.  The blackboard and chalk background highlight the lively images, the larger one of Frank and Lucky running on the front and the smaller illustrations to the left, on the back.  Each of the six circles features a subject.  Be prepared to laugh loud at the comments and captured moments, each different than those seen in the interior of the title.  A cheerful yellow covers the opening and closing endpapers.

Lynne Rae Perkins places nine small pictures of varying shapes and sizes across the verso and dedication pages which set the scenario for the opening of the story.  She continues this with six small squares across the top of two pages conveying without words the events leading to the eventual meeting of Frank and Lucky at the rescue shelter.  This meeting is depicted in two separate pictures at the bottom of the two pages.

In the remainder of the book the images are loosely framed like memories. Soft delicate details create very realistic portraits of the individuals and the settings.  Perkins incorporates dashes for travel, fractions and measurement, lines with illustrative pictures and specific names (as with the burdock), yes and no boxes for scientific experiments, and multiple choice answers in her illustrations as if they are meant to be there.

One of my many, many favorite illustrations is for the text above.  It spans two pages. Outside a window you can see it's a sunny winter day.  Golden light comes through the window shining on Frank and Lucky on the couch.  Frank is leaning against the right arm reading a book.  Lucky is sleeping with his body stretched over a pillow, on his back with his legs sprawled in complete contentment.  Around the room our eyes see pictures on the wall, a filled bookcase with a globe on top, a lamp and table, several chairs, a rug spread on a wood floor with Frank's shoes tossed there and stairs leading to a second story.  In a word, it's perfect.


In her words and pictures Lynne Rae Perkins gives to readers a book, Frank And Lucky Get Schooled, which like the story itself holds endless possibilities.  You can certainly read and enjoy it for the humorous anecdotes but the "what-ifs" will start to scroll through your mind.  Read this one repeatedly, it gets better and better.  And be sure to read it aloud, preferably with a room full of guys and gals.

To learn more about Lynne Rae Perkins and her other work, please follow the link attached to her name to access her website.  If you stop by TeachingBooks.net or NPR Books you can listen to Lynne and then Lynne and her daughter talk about this book.  At The Horn Book this book was brought up for discussion at Calling Caldecott.