Very early Sunday morning a string of storms brought noise and rain to our area for hours.  This provided the ultimate opportunity to read wrapped in a blanket on the couch.  Soon the sounds of the showers and thunder and flashes of lightning faded into the background as a book was started and consumed, cover to cover in one sitting. 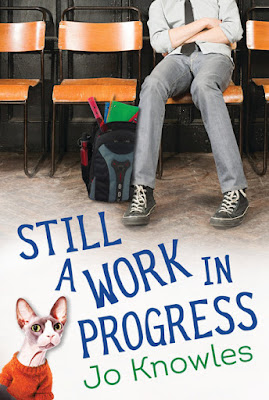 All lifelong readers have toppling stacks or shelves filled with books to be read.  Sometimes books call to you immediately but you wait to read them letting the anticipation build, knowing they will be filled with something powerful and memorable.  This is the way it was with Jo Knowles new middle grade title, Still A Work In Progress (Candlewick Press, August 2, 2016).

"I am not afraid of Molly Lo," Ryan tells me from inside the stall of the boys' bathroom.  He refuses to use the urinal, just like everyone else.

"Then why are you hiding in the bathroom?" I ask.

"She's stalking me," he says.  "Stalkers make me nervous."

With those five sentences we are whisked into the world of seventh grader Noah and his two best friends, Ryan and Sam.  Very quickly we are introduced to other students in this small New England school, Lily, Belle, Small Tyler and Big Tyler and their social studies teacher, Mr. Sticht, nicknamed Tank.  Initially they are addressing the fairly common but gross problem of what is causing a revolting odor in Small Tyler's locker.

Later the entire school gathers for their once-a-week Community Meeting where we meet Ms. Cliff the principal and art teacher, Mrs. Phelps, the science teacher with knock-you-dead breath, Madame Estelle, the French and math teacher and Mr. Marshall, the English teacher.  The most interesting member of this new cast of characters is Curly, the school pet, a hairless cat who wears an assortment of vests to keep warm.  What prompts these meetings and what keeps the discussions lively is the Suggestion Box.

By the end of the first chapter we are given a single sentence hinting at events to come.  Noah's older sister, a vivacious, nearly-perfect-in-every-way and determined vegan, Emma is the reason behind the unease readers begin to feel and the Thing We Don't Talk About.  While conversations at school are about girls, dating and the school dance; conversations at home revolve family meals and wondering if Emma is okay.

This year is when Noah's star starts to shine as his gift for sculpting with clay and drawing are noticed and praised by Ms. Cliff.  It's in art class when Noah feels the best as his concerns drift away.  This lasts until during winter break on Christmas Eve.  As Noah, his mom and dad wait for Emma so they can leave for church, their worst fears are confirmed.

For months with no sure end in sight Noah and his parents try to swim through worry, sadness, helplessness and guilt.  Noah's emotional turmoil reaches to his friends, classmates and the staff at his school.  It's a time when people try to be the best they can, not always sure what to say or do.  It's all part of being human.  It's when true friends and family remain true.


Jo Knowles must be the ultimate observer of human nature because she gets it supremely right in the pages of this book.  As an educator in middle school for several decades, I can honestly say her portrayals are refreshingly genuine and brimming with humor.  Although the struggles of Noah, Emma and his parents are heartbreaking, Knowles nevertheless uses humor here too in the beginning to show us how this family can be when they are at their best.  The school cat, Curly, and the family dog, Captain, are the comfort and comic relief the characters and readers need.

Noah's thoughts, his point of view, and the conversations with friends, classmates and family members will envelope you with all the emotions of the moment. We are very personally involved in this story.  As each individual grows and changes, we can't help but assess how we might be in a similar situation.

Each chapter begins with a heading as if it's a suggestion from the school's box.  This leads us into the dialogue and events within that section of the book.  Knowles ends the chapters with a thought to ponder, a link to what follows.  Here are a few passages from the book.

When he tosses it in, an even stronger smell hits me all at once, and I stagger backward into Max, who staggers into Lily.  We are like dominoes falling into one another and gasping, eyes watering.  I try to think of a worse smell but can't, and that's saying something.  There are three things I can think of off the top of my head.  A dead mouse whose smell spread through the whole school the day the heat kicked in for the first time in the fall.  Tyler Gingritch's farts after his parents had a chili-contest party in October and he wandered through the school leaving gas in every room just to torture us all, and then Zach Bray and Max Fitzsimmons, who were also at the party, formed a group called the Fart Squad and went around leaving stink bombs right before class. And finally Mrs. Phelps's coffee breath, better known as Death Breath.  It fills the science room every morning and makes even Miranda-with-the-Always-Stuffed-Up-Nose gag.
This is the smell of a thousand dead mice.  A million Fart Squad bombings.  And worse than a fan blowing Mrs. Phelps's Death Breath straight into your mouth.

The girls' room is like a mystery cave to the boys.  All we know is that it smells like twenty kinds of body spray vying for air domination.  You literally taste it when you walk by the door.

"What's that smell?" Belle asks.
Sam and I look at Ryan. He could say it's him and maybe gross Molly out.  But instead he points to the sandwich like a traitor.
"What?" Sam says.  "I think it smells good."
"What kind of sandwich is that?" Lily asks, wrinkling her nose.
Sam sighs. "Liverwurst and onions.  With mustard."
"Gross," Belle says.  "No offense."
It seems like we all say "No offense" a lot around Sam.
"My grandfather used to make those!" Molly leans forward and sniffs.  "Can I have a bite?"
Sam looks shocked.  "Really? Yeah!" He hands it over and she takes a huge bite, nodding as she chews.
"Oh, yeah," she says through a mouthful.  "Mmmm."  She smiles at Sam as if this is the first time she's noticed him.  "He made these for me whenever I visited him."
Molly hands what's left of the sandwich back to Sam, who smiles at her dreamily.
Ryan watches them in disbelief as they fall in love over a liverwurst sandwich.


With the eloquence and precise care of a master photographer Jo Knowles gives us rare and rich glimpses into Noah's life and times during his seventh grade year with her words in Still A Work In Progress.  You will read this book in great gulps until you have finished, then you will go back and reread favorite portions.   Some are full of laugh-out-loud hilarity and others with deep clarity and moving impact.

To learn more about Jo Knowles and her other work please follow the link attached to her name to access her website.  Here is a link to Jo Knowles blog.  You can read nearly four chapters at this publisher's website.  At the Candlewick Press website in addition to several chapters for reading, there is a discussion guide.  I think you will like this conversation at the Nerdy Book Club between Jo Knowles and Kate Messner about their two new titles and the subject matter in each.  Enjoy the videos.