There are individuals who by the lives they live inspire those around them.  Their path is not always well-worn by the use of others.  They choose the high road, the road in service to others.  They live by the Golden Rule which means everyone wins. 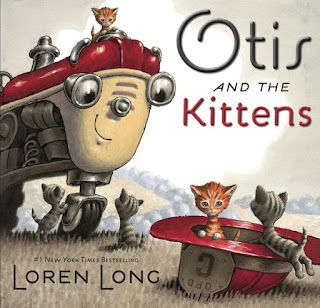 We observers of these individuals, some of us recipients of their kindnesses, learn regardless of being aware a lesson is being presented.  One such being in children's literature is Otis, the tractor.  His goodness seen in Otis, Otis And The Tornado, Otis And The Puppy, An Otis Christmas, and Otis And The Scarecrow is steadfast and spirited.  Otis And The Kittens (Philomel Books, an imprint of Penguin Random House LLC, September 20, 2016) penned and painted by Loren Long takes us back to the farm, a place we have grown to love.

It was hot and dry on the farm where the friendly little tractor named Otis lived.

It was a rainless summer with low water levels.  Otis worked with the other farmhands in the fields baling and bringing in straw to the barn near Mud Creek.  While Otis was ready at day's end to rest in a shady spot, the bull was not.  It was time for a good old-fashioned game of tug-of-war.  He gave his signature signal, the ducks looped the rope around his horns and Otis's steering wheel and the fun commenced.

One afternoon as the animals gathered together Otis noticed an orange tabby cat racing to the barn.  Smoke was coming from the upper level!  Reaching the bottom of the hills and seeing the cat in distress, Otis with his remarkable

charged forward.  Inside flames seemed to leap from one bale of hay to the other.  The cat was meowing frantically.

In reply soft meows, like whispers, came from the loft.  There were five kittens.  Otis positioned himself so they could ride on him to safety.  Once outside the mother was still panicked.  Returning Otis found the barn thick with smoke and the fire was fierce but he managed to send the sixth kitten on its merry way.

As Otis struggled to leave, the fire delivered a blow to our hero.  The intrepid tractor was in terrible trouble.  Even the arrival of Fire Chief Douglas did not alleviate his fears.  Outside the barn, Otis's animal friends were in a frenzy.  They had figured out what the people had not.  In the following moments, the fire and fear were replaced with friendship, a friendship forged one


When Loren Long writes about Otis, the animals, and life on the farm his descriptions take us into the landscape.  He vividly represents the seasons and the weather which are integral to this way of life.

Water was in short supply, the ground was hard and the cornstalks were half as tall as they should've been.

Long creates a scenario, the animals in a tug-of-war game, with significant phrases and actions which is a part of the rhythm of barnyard playfulness but also is essential to the narrative.  With every sentence, after the discovery of the fire, the tension increases as Otis goes and returns from the barn.  Our hearts are completely connected to Otis, the situation and the other characters.

Otis wheeled around to see if any more kittens were left.  The old boards of the barn's floor creaked, buckled, and moaned.  The walls popped.  He couldn't wait another second.

But like all master storyteller's Loren Long takes us into a story and back out again, all the better for having been there.


On the matching dust jacket and book case Loren Long features the friendly tractor and the first five kittens he rescues.  Placing two of them inside the fireman's hat gives us our first hint of the conflict in this story.  To the left, on the back, within a circle is the old-style fire truck, hoses being unwound by two firemen.  The ducks, puppy and kittens are anxiously watching.  A tiny Otis at the bottom is racing toward the ISBN.  On the steely gray opening and closing endpapers, Long has placed a single phrase in white.

FOR THE BRAVE WHO RUN TOWARD DANGER INSTEAD OF AWAY.

On the initial title page one orange kitten is inside another fireman's had with the C replaced with a 10.  A stunning two page panoramic view of the farm, looking like an Andrew Wyeth painting but still distinctively a Loren Long work of art, is the canvas for the formal title page.

Single page portraits of life on the farm are loosely framed in a small black line on backgrounds of crisp white. On the two-page spreads the same black line edges the images but Long has some of the elements break outside the confines of those lines.  To intensify a given situation perspective is shifted, pulling us into the scene.  In several frightening moments the illustrations bleed off the sides and top of the page.

The color palette chosen by Long in the Otis books is important to the way we experience these tales.  The shades of brown, gray, and black with splashes of color, the daisies, the ducks' bills, the bull and kittens and Otis's red are particularly pastoral.  Whether you are familiar with farmlands or not, Long conveys their soul.

One of my favorite illustrations of many is when the animals are playing tug-of-war.  To the left of the gutter the bull, rope wrapped around his horns, is pulling away, hooves firmly in place.  He is being assisted by the horse, puppy (clinging above ground) and two ducks.  On the right side Otis, tongue outside his mouth in concentration, is heaving, his front wheel off the ground.  Three ducks, the cow and calf are helping him.  I like that two of the ducks break out of the frame.


Otis And The Kittens written and illustrated by Loren Long is a fine, fine story of life on the farm and the friendships grown there.  It's a tribute to those who place themselves in harm's way to save others.  It shows what I heard repeatedly when growing up...many hands make light work.  These characters are beloved and this story will cause a collective sigh at the end.  Trust me.


To learn more about Loren Long and his other work please visit his website by following the link attached to his name.  There is a special website devoted to all the Otis books.  You can get a peek at the interior at the publisher's website.  Loren Long talks about Why Picture Books Are Important during Picture Book Month 2015.  Several years ago Loren Long was featured at artistsnetwork.  An Otis lesson has been created at TeacherVision.  This is a subscription database but for now this lesson is available.