Who's House Is This?

Certainly we can use more laughter in our world.  It's a better cure than an-apple-a-day for nearly everything and it's free.  If you should be fortunate enough to share grins, giggles and guffaws with children, well your life is pretty much the best it can be.

At the tail end of November last year Mother Goose  Bruce written and illustrated by Ryan T. Higgins was released to readers who could hardly get from one portion of the story to the next without breaking out into peals of laughter.  That's what happens when a crabby bear, with a craving for gourmet meals prepared with eggs, ends up becoming a mother to four goslings.  As spring moved to summer and then fall, Bruce was still not relieved of his parenting duties.  The only solution was five bus tickets to sunny Miami. 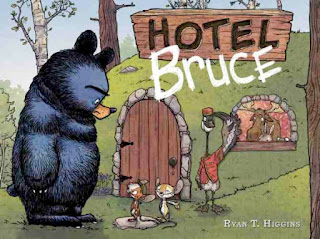 In a companion title Bruce is unenthusiastically continuing the sojourn to sunny Florida each year.  Not for the first time, Bruce longs for the good old days of hibernation.  Hotel Bruce (Disney Hyperion, October 18, 2016) chronicles the surprise awaiting the bear and four geese on their return.


Bruce was a bear
who lived with four geese...
...reluctantly.
But he was their mom.

The northward trek from the bustling beaches was exhausting. To say Bruce was shocked to find his humble home turned into a hotel in his absence by three mice was an understatement.  His cranky-o-meter was on the rise as he broomed them out of his abode.

To heighten his anxiety his bed was already occupied by guests, a moose, rabbit, porcupine, raccoon and slumbering turtles who assumed he was there for the sole purpose of attending to their every need.  His "alarm" in the morning took the form of opossums engaged in a hearty battle...with pillows.  With each new surprise the situation escalated.

Apparently the three mice had regained control and turned the four geese into attendants.  In the midst of a heated discussion, the fox, who was attempting to lure the turtles into a soup pot with a promise of a spa-like experience, interrupted them, scared witless and running like the wind. It was revenge of the reptiles.

As you can surmise Bruce was on the verge of a major eruption but even that was misunderstood. When the bear thought he must surely have stepped into some woodland version of an alternate universe, his fears were confirmed.  The expected and unexpected blend into a conclusion that's all Bruce.


When Ryan T. Higgins writes, especially in this book, an undercurrent of hilarity runs through the text waiting to bubble to the surface.  Meticulous pacing and short sentences build toward the inevitable. The mix of narrative by someone we can't see with characters' dialogue elevates the story's capacity for comic results.  Here is a passage.

It was a long night.

Can I have a drink of water? (raccoon)
You're hogging the sheets. (moose)
I want to snuggle. (porcupine)
I need to pee. (rabbit)


Nobody draws a grumpy bear like Ryan T. Higgins.  Clearly Bruce is not a "happy camper" with the residents in his home. One of the geese wearing the bellhop attire is the crowning touch.  The anxious looking guests peering out the window are in sharp contrast to the chatty mice.  To the left, on the back of the dust jacket, placed on a textured blue background is a scene of the remaining three geese in the caps and coats, saluting the third mouse, who happens to be wearing glasses and has a mustache.  This image is varnished.

On the book case it's as if we are inside Bruce's house looking at the newly wallpapered walls which you only glimpsed on the jacket.  A variety of photographs are hanging along with a ticking pendulum clock.  The NO PETS sign is a classic touch.  The opening endpapers are a sunny fall day outside Bruce's then quiet home.  A serene summer vista spreads across the closing endpapers, absent of any life.

The heavier matte-finished paper enhances Higgins's use of white space, the fine lines, animated details and general physical traits of the characters.  The body postures on all of them and their exaggerated facial expressions, particularly those on Bruce, are priceless.  Just when you think you can't laugh any more, he places something in an image like a feather sticking to Bruce's nose, which makes you laugh even more.  The size of the illustrations is alternated to showcase the text and place emphasis on a given situation.

One of my many favorite illustrations is toward the beginning of the story. It spans two pages.  It is the beach scene with a Welcome To Miami sign stuck in the sand.  The sand is loaded to the beaks with honking geese, some in Hawaiian shirts.  Two alligators are singing and dancing while playing a ukulele and tambourine.  A third alligator is throwing a beach ball in the air. Bruce is in the middle of this chaos wearing his Hawaiian shirt looking rather gruff and grim.


I'm surprised this book, Hotel Bruce written and illustrated by Ryan T. Higgins, does not shake with chuckling and chortling in your hands even before it is opened.  When Bruce and the geese are back it's the best of the best.  You should be prepared for a resounding "read it again" as soon as you are finished.

To learn more about Ryan T. Higgins please visit his website by following the link attached to his name.  The cover for this title is revealed along with an interview at educator and director of the Plum Creek Children's Literacy Festival, Dylan Teut's website, Mile High Reading.  Author and teacher librarian Carter Higgins features this book on her website Design of the Picture Book including some interior images.