For task-oriented individuals nothing will dissuade them in their determination to reach a goal unless it is their demise.  Everything they think and do works toward the final outcome even when common sense and suggestions of others dictates a different direction.  They plan and re-plan adapting necessary steps.  The more personal the objective the harder they work. 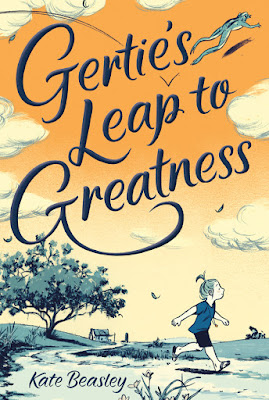 When their goal is to gain the attention of a parent mostly absent from their life and when a deadline looms, their tenacity is fierce.  Gertie Leaps to Greatness (Farrar Straus Giroux, October 4, 2016) written by debut novelist Kate Beasley with illustrations by Jillian Tamaki is a roller-coaster trip whose ups and downs and twists and turns will have you holding on to your heart.  When it's over, you can't wait to do it again.

The bullfrog was only half dead, which was perfect.

Gertie Reece Foy has a mission and Gertie is known far and wide for never, ever giving up.  When she arrives at school tomorrow carrying the resuscitated frog in a box, she knows her summer story will top all others.  She knows she will be on her way to being

the greatest fifth grader in the whole school, world and universe!

What she and her best friends, nervous Junior Parks and smart-as-a-whip Jean Zeller, do not expect is the new girl, Mary Sue Spivey.  As soon as they meet, with Mary Sue claiming the seat already occupied by Gertie, the entire school year spread before Gertie looks a little less bright and a whole lot more challenging. She simply has to be the best; otherwise how can she go to Rachel Collins' home and declare her greatness.  Otherwise how can she stand tall, brimming with pride, before the mother who left her and Gertie's dad when Gertie was only a baby.

It seems as though Mary Sue is very well educated, even naming a capital faster than Jean who is the brightest girl in the school.  Well, Gertie decides to study every single textbook she has to accomplish her mission but Junior is not sure Jean is keen on this idea. Are you thinking what I'm thinking?

By the time the leaves are off the trees, Gertie is no closer to her goal and Mary Sue is assuredly the most popular and best-at-everything girl in the classroom.  Maybe, as Junior suggests, Gertie can shine on Career Day.  Her daddy, Frank Foy, is tall, handsome and works on one of the oil rigs, home for two weeks and away for two weeks.  Even though he can't attend like the other parents, Gertie is sure she can make his occupation shine above all the others.  Mary Sue Spivey's mom is a lobbyist working for the removal of oil rigs.  Can it get any worse?  Yes, it can.

A math test, an invitation, and a stellar bit of acting by a clever, conniving individual lead to disaster for Gertie.  She becomes the object of fickleness and bullying.  An information gathering operation backfires, a protest goes wild and Gertie's life gets more and more complicated.  When junk food, fruits, vegetables and chocolates figure heavily in her next obstacle, Gertie jumps right in repeatedly, regardless of the consequences.  Her great-aunt Rae, a steady parental figure, Junior and young Audrey, who stays with Aunt Rae and Gertie each day until her parents finish working, are constant supporters of Gertie, allowing her to make a leap....like a bull frog.


"Oh my Lord!" is one of Gertie's favorite exclamations.  It will frequently come to mind as you step into this slice of a ten-year-old's life.  Kate Beasley's use of language in first person musings and conversations laden with characters' true qualities will pull you into Gertie's world on the first page and won't let go even after the final sentence is read.  The down-to-earth and sincere philosophies and logic of Aunt Rae, Audrey, Junior, Gertie's dad and Gertie will inspire and lift you up.

The other characters, Mary Sue Spivey, Jean Zeller, Rachel Collins, Ms. Simms, Gertie's teacher, Mrs. Spivey, the Spivey housekeeper, Junior's mother, Mrs. Stebbins, the art, music and drama teacher, the school bus driver and an assortment of classmates all play pertinent parts creating those ups and downs and twists and turns as only people created by Kate Beasley can.  We won't always know why they act or say as they do but we certainly feel their impact; as real and emotional as if it is happening to us.  Beasley's people walk right off the page into our presence.  Here are some sample passages.

She pointed her toothbrush at her reflection.  "This is your moment," she said and she wiped away her toothpaste beard.
In her bedroom, she put on shorts, her favorite blue T-shirt, and the twenty-five-percent-off sandals Aunt Rae had bought her.  Then she fastened a gold locket around her neck. Gertie dropped the locket down the front of her shirt and picked up the shoe box, enjoying the weight it had to it.  Nothing, she decided, was as comforting as the weight of a nice, healthy bullfrog.
When Gertie marched into the kitchen, Aunt Rae held out a package of Twinkies, and Gertie snatched it out of the air with her free hand.  She stepped through the screen door, then stopped and tilted her head, waiting.
"Give 'em hell, baby" called Aunt Rae.
Gertie tapped the Twinkies to her brow in a salute and let the door bang shut behind her.

"Gertie Reece, what are you doing in there?" Her father knocked on the door.
Gertie's head fell against her book.
"Aunt Rae wants to talk to you," he said.
Technically, Aunt Rae was Frank Foy's aunt, but Gertie always thought it sounded strange when her father said "Aunt Rae."  Old people weren't supposed to have aunts. Old people didn't need aunts.
"Why'd you let Audrey have that remote?" Aunt Rae called.  "I'm coming in."
"Aunt Rae!"  Gertie jumped up so that she was standing on her bed.  "You're invading my personal space!"
Aunt Rae flapped her hand in a shushing gesture.  "What are you up to?"  She toed some of the comic books out of the way.
"Albert Einstein didn't have these kinds of interruptions!" Gertie protested.

If Mary Sue Spivey thought you were stuck-up, you must have your nose so far in the air that you could smell angel farts.


Spot illustrations in the narrative drawn by Caldecott Honor winner Jillian Tamaki accentuate truly pivotal moments.  We are privy to her interpretations of the summer highlight speech and the reveal of the zombie bullfrog, Gertie studying by flashlight, Junior's Mohawk haircut, and the taunting real estate sign, to name a few.  Her perspectives frame the emotional moment.


Gertie's Leap to Greatness written by Kate Beasley with illustrations by Jillian Tamaki will consume you with this girl's zest for life and living it on her terms, amid the love and support of family and friends.  Her never-give-up attitude takes us from one believable and unbelievable episode to another.  We can't help but cheer long and loud for her each time we read this title.

To learn more about Kate Beasley please visit her website by following the link embedded in her name. Scholastic's Ambassador of School Libraries, John Schumacher hosted Kate Beasley on his blog Watch. Connect. Read.  Epic educator and reading advocate Colby Sharp interviewed Kate Beasley on his blog, sharpread.  Kate Beasley and her journey as a debut author is the subject of Season 2 of The Yarn.  At the Nerdy Book Club Kate Beasley's editor Grace Elizabeth Kendall talks about this title.  In February of this year Publishers Weekly did an article about this debut book including interior illustrations.  Kate Beasley is interviewed at The Horn Book and Time for Kids.  At the publisher's website you can view interior pages and an excerpt.  There is a separate site designated for this specific book.  Kate Beasley is teacher librarian Matthew Winner's guest at All The Wonders, Episode 293.

Bloggers participating in the Gertie's Leap to Greatness blog tour were asked to call out the name of an individual who is great for themselves and others. There are many wonderful people I could name who go far above and beyond especially in the children's literature community. Like the parent who does not want to name a favorite I am going to name individuals, yes two, who came to mind immediately.

The first is my mother, a woman who dedicated her life to her mother, her husband, her two daughters and decades of students who came through the doors of her elementary school library.  Her library displays, storytelling and author all-day visits and epic evening events hosting such masters as Eric Carle, Tomie dePaola, Pat Hutchins and Jose Aruego were remarkable.  I honored her in a blog post here.

The second individual, for people closest to me, will be no surprise.  My dog Xena from the first day to her last day spent with me was lived with a joyful spirit.  She never, ever gave up.  Even hours before her heart took its final beat she got up from her bed, walked to the door waiting for me to carry her down the steps.  She nearly skipped across the snowy deck in bitter temperatures, taking a little leap to the up-hill lawn, walking steadily before she sat down and looked up at me.  For the life of me, it looked like she was smiling.

She was a frequent visitor to school storytimes in my library.  She recommended books and spoke to the students via videos.  Whenever we entered the building she would race down the hallway to the library.  As a puppy she only chewed on the corner of a single book once. I guess she knew they were much better suited for stories than snacks.  I honored her in a series of posts beginning here.

I like to think that my mom and my beloved dog are leaping together knowing the greatness they left behind.
Posted by Xena's Mom at 1:05 AM