This Is Where The Magic Happens

Without fail every night for more than fifteen years there was not a sky I did not stand beneath marveling at the stars and phases of the moon.  When you have a canine companion this is the way of your world.  In truth gazing upward looking at the beauty found in the dark has captivated me for most of my years.  No matter what happens during the days of our lives, no matter what happens on this planet of ours, the stars and moon offer constant comfort. 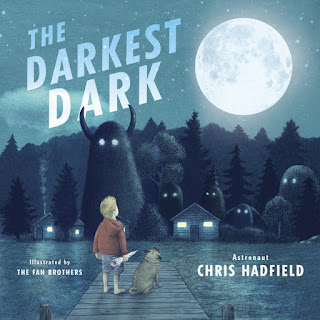 The dusk and blackness which comes after the setting of the sun is not always welcome to everyone.  The Darkest Dark (Little, Brown And Company, September 13, 2016) written by Chris Hadfield and Kate Fillion with illustrations by The Fan Brothers (Terry Fan and Eric Fan) is a story of dreams.  There are dreams held in the heart of the dark.

Chris was an astronaut.  An important and very busy astronaut.

He tried to avoid getting in and then out of the bath tub before bedtime with proclamations to his mother and father about astronautical duties he needed to perform.  When he was ready for bed he simply could not relax.  Chris couldn't sleep and his parents craved sleep.

When he was asked to stay in his own bed, he tried but the dark, the very, very dark was a special place; inviting to aliens.  At their wits' end his parents went back with him to his bedroom, checking everywhere for any visitors from other worlds.  They left him a bell to ring on the outside chance he would see any guests.  The persistent ding-a-linging brought them to his side.

His father patiently reminded Chris, he had to go to sleep otherwise they would be too tired for the once-in-a-lifetime event tomorrow.  When the next night finally arrived Chris and his parents joined a whole crowd of people gathered to watch the only television on the island.  It was July 1969.

Chris, his best buddy, Albert, a pug, and all those people watched real astronauts walking for the first time on the Moon.  Chris realized something else as he looked at those men in space on Earth's satellite.  With this awareness something big shifted inside his mind.  Later, back in his bedroom, at home everything was the same except for Chris.  With new eyes, he was seeing the dark, the very very dark and its infinite possibilities.


As children our imaginations are running at full tilt, nearly every waking moment.  Chris Hadfield and Kate Fillion convey the excitement of role-paying your dreams.  They also expertly depict the very real childhood fear of the dark and the persistence and patience of parents who are trying to help their son but need their sleep too.  In those minutes when Chris is watching the astronauts walk on the moon and a new viewpoint sweeps through his being, the narrative changes declaring profound truths, uplifting you as they did a boy who made his dreams come true.  Here is a sample passage.

His mom and dad checked under his bed and in the closet and even in his underwear drawer.  They declared the room 100 percent alien-free.


The initial look at the image spanning the entire dust jacket, back to front, left to right, will have you wondering about the darkest dark.  What is happening beneath this moon?  What is this boy seeing as he looks across the lake?  Here as they have done throughout the book, The Fan Brothers attention to detail is exquisite.  We know two important things about this boy, his love of spaceships and his dog.  On the midnight blue book case the only element, in silver, is the surface of our Moon on the right, front, of the case.

An even darker shade of blue replete with stars covers the opening and closing endpapers.  Rendered in graphite and colored digitally the illustrations by Eric Fan and Terry Fan dazzle your eyes at every page turn.  They begin with a two-page wordless spread of the home on the lake surrounded by trees in back, the sky brightening with the sunrise.  In the first single page image a calendar hangs on the wall signifying July 1969.  Chris has a moon phase poster hanging over his bed and a crescent moon night light.

The mix of true historical and more recent elements, the Toronto Daily Star newspaper, Walter Cronkite's face on the television screen broadcasting the moon landing and walk and images of Earth from space, blend beautifully with the other artwork.  The design of these pictures draws us into the scene.  We feel as if we are in the room with Chris and Albert as the aliens come into his bedroom, they are more curious than frightening.  The alternating perspectives and the light and shadows are realistic but also magical, imitating the wonder of true life.

I have many favorite illustrations but one I particularly like is the evening of the broadcast.  It spans two pages.  We are outside the home of the neighbors owning the television set. A mix of evergreen and deciduous trees is around the outside, leaves drifting down as a moon and stars share the sky.  Lights shine from inside as people gather.  Chris, his mother and father and Albert are about to enter the house.  Two large aliens are watching them over the rooftop.


The Darkest Dark written by Chris Hadfield and Kate Fillion with illustrations by The Fan Brothers, based upon Chris's memories of summers spent at his family's cottage on Stag Island, is about facing fears and following dreams.  The text and illustrations will transform readers of all ages.  For some of us we can remember that July 1969 and for others, the marvelous moments are reborn.  At the close of the book a page is devoted to Chris's steps in making his dream come true.  Opposite that page on the left, The Fan Brothers have placed memorabilia from his boyhood.  On two more pages Chris Hadfield leaves a message for readers with nine original photographs.

To discover more about Chris Hadfield and The Fan Brothers and their accomplishments please follow the links attached to their names to access their websites. At The Fan Brothers website you can view the other cover for this title.  There is an article and several more interior illustrations at thestar.com.  I know you will want to read this interview of The Fan Brothers at KidLit411.  Author, reviewer and blogger Julie Danielson features The Fan Brothers and art from this book at Seven Impossible Things Before Breakfast.  Enjoy the videos.