It's An Officer Katz and Houdini Celebration and Giveaway

Who can say for how many centuries dogs and cats have had a less than amicable relationship?  Storytellers from numerous cultures have handed down explanations for generations in folktales.  Some scientists have offered up the canines' prey drive as to why some dogs chase cats.  When people with both cats and dogs in their households say they get along fine, you wonder if instinct and survival has been put aside in favor of a truce. 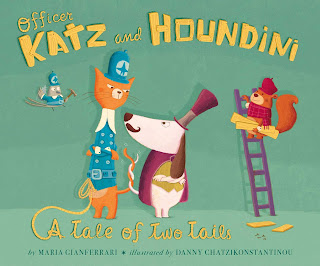 In similar discussions people have pondered which of the two, cats or dogs, are more loyal, lovable, intelligent or clever.  Officer Katz and Houndini: A Tale of Two Tails (Aladdin, an imprint of Simon & Schuster Children's Publishing Division, October 18, 2016) written by Maria Gianferrari with illustrations by Danny Chatzikonstantinou is about a long-standing rivalry in a very specific place.  Time is dictating a call to action.

Officer Katz was an inventor extraordinaire.
His Katz-traptions were the best in Kitty City.

Even with his imagination and skills Officer Katz was no match for the Great Houndini, an escape artist of exceptional talent honed over decades of experience.  Each year the mustached magician visited Kitty City with his traveling show, The Great Escape.  Each year the town founder's portrait was vandalized with a telltale mustache.

As Officer Katz watched the arrival of the familiar wagon, he knew this was the year he needed to make a decisive move as his retirement loomed on the horizon.  Crowds of cats converged to gasp and applaud the marvels performed by Houndini.  Journalists and photographers were there to record his stunts in print and on film.  They all saw there was nothing that could hold this canine captive.

Backstage after the curtain closed on the final act, Officer Katz stopped Houndini in his tracks with a challenge; a three-part challenge to test the dog's breakout abilities against the canine's ingenious inventions.  There were consequences for Houdini if Officer Katz won and likewise for Kitty City and Officer Katz if Houndini was the victor.  The press was ready and waiting in the wings.

On days one and two

told the tale but the third day was not quite the same.  A misplaced piece of the Katz-apult caught both parties up in an unexpected consequence.  The conclusion is paws-itively unprecedented.  Even Squirrel and Deputy Catbird were perplexed but the show must go on.


No matter how many times you read this title, you can't help but be amazed at the wordplay penned by Maria Gianferrari.  Her use of alliteration and puns provides non-stop appreciation for her skills with language.  One clever technique this reader enjoyed is having newspaper headlines incorporated into the narrative.  A true passion for portraying animals, especially dogs and...okay...cats, in her books makes this story a win-win for everyone, characters and readers alike.  Here are two passages from the book.

Houndini hurtled into town,
tipping his top hat,
his cape billowing in the breeze.

On the first day, Officer Katz strung his
new-and-improved Katz-net in Cat and Mouse
Playground.
It was as sticky as a spiderweb and as stretchy
as a cat's cradle.


The dust jacket (I am working with an F & G.) introduces readers to the muted full color palette used for all the images.  We also get a first peek at the attention to detail provided by Danny Chatzikonstantinou in each illustration.  Note the rope in the sub title, the wood used in Officer Katz's inventions as part of the title text, the two intertwined tails of the cat and the dog and the placement of their partners, Deputy Catbird and Squirrel.  To the left, on the back, the two assistants are sleeping next to one another on top of the center of three suitcases framed by stage curtains. Their dreams appear above each in a circular speech balloon.

The opening and closing endpapers are several hues of teal. It's a large representation, a map, of places on The Great Escape's tour with names like West Cheddar and Nutbury.  Beneath the words on the title page, Officer Katz and Houndini with their tails still wrapped together are glaring at each other, paws on hips.

Chatzikonstantinou alternates his picture sizes to supply pacing and to elevate the narrative, using a variety of background hues, white, deep blue, purple, mint green, turquoise, teal and rose.  He shifts his perspective also; as if we are looking from an upper window down at Houndini's arrival, as one of many members in the evening audience viewing the stage from a distance, or a cross-section of Houndini's routes inside a maze.  Careful readers will notice other elements such as the cat trees around the performance venue, the opera glasses used by two leading characters, Officer Katz's special rope and the shape it forms, and the pawprint emblem on Houndini's cape.

One of my favorite illustrations is of the Tabby Times front page on day two.  The headline reads

In the lower left hand corner Houdini is lifting his hat, twirling and winking at the audience.  In the upper right hand corner Officer Katz is proudly posing for his victory picture.  Beneath this is an image containing a small pile of dirt, a hole and a dog paw lifting out to grab a signature hat.  This is one of many times when humor is prominent in the pictures.


If you appreciate an original take on an age-old conflict, Officer Katz and Houndini: A Tale of Two Tails written by Maria Gianferrari with illustrations by Danny Chatzikonstantinou is a title perfect for you.  The clever narrative and spirited illustrations bring to readers a new paw-spective.  It might be fun to perform this as a reader's theater or to challenge readers to think of other puns.

You can view interior images from the book at the publisher's website.  Maria Gianferrari was a guest at Scholastic's Ambassador of School Libraries John Schumacher's blog, Watch. Connect. Read.  She was also featured at Jama's Alphabet Soup maintained by Jama Rattigan and at KidLit411.  Yesterday Maria Gianferrari started this blog tour at author Tara Lazar's Writing For Kids (While Raising Them)  Be sure to visit this site and the other's listed below on the tour.

Hot diggety dog!  Maria Gianferrari's a lucky dog---she gets to write stories about cats and dogs, and when she's dog-tired, she can catnap in her office.  Maria lives in northern Virginia with her cat's meow of a family:  her scientist husband, artist daughter, and top dog, Becca.  She is the author of the Penny & Jelly books as well as Coyote Moon and the forthcoming Hello Goodbye Dog.  To learn more about Maria, please visit her website at mariagianferrari.com, Facebook or Instragram.