If It's Not One Thing, It's Another

Within any given twenty-four hour period most living (or probably every single living) thing will experience one or more problems of varying degrees.  Some difficulties are small blips on the road of life.  Others may leave you wondering where the road went.  There are complications you can solve alone or with help.  For some situations there is no answer.  You simply have to accept the dilemma as unsurmountable despite your attempts. 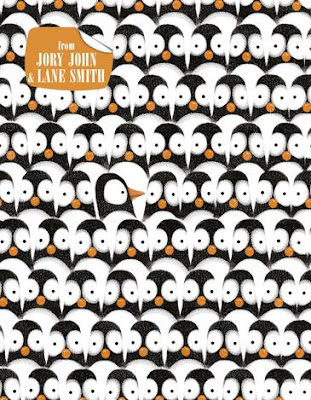 In these circumstances where you have no control, it all comes down to attitude and perspective.  Yes, it's the old adage of looking at that glass as either half full or half empty.  If we journey to the last continent of silence (according to Admiral Richard Byrd), there will be one voice more distinct than others.  In Penguin Problems (Random House, September 27, 2016) written by Jory John with illustrations by Lane Smith, readers can't help but laugh out loud at this bird who most definitely does not have an attitude of gratitude.

It's way too early.
My beak is cold.

A catalogue of complaints begins this tale of an Antarctica resident. Granted this continent does have the coldest recorded temperature on the entire planet, but certainly there will be a bright spot in this inhabitant's day.  Nope.  Not yet. The chatter of his companions bugs this penguin too.

As luck would have it Mother Nature has the audacity to have it snow the previous night.  Doesn't she know this is the driest place on Earth?  Hunger sends our flippered friend to the sea seeking fish.

A dive into the darkness reveals a whole new set of problems, escalating by the minute.  It seems the penguin is not the only one with a craving for breakfast.  Whew! Back on terra firma physical attributes duly noted simply don't live up to expectations.  No amount of flapping is going to see this guy soaring.

A final frustration sends our protagonist into a total tizzy.  A wise walrus moves into the scenario and proceeds to point out, in an epic declaration, how the penguin needs to view the world.  This, as you might think, is observed with a heavy dose of annoyance.  Or is it?  As night descends a lone voice can be heard.

Pointed, perfect pacing is a result of Jory John's word choices, sentence structure and keen sense of humor.  By the third sentence, a question, readers recognize this penguin does have a problem and it's only morning!  As the narrative proceeds John increases the tension by moving from the environment to daily rituals and then to very specific physical traits.  In the sequence where the penguin is seeking his parents, readers will roll on the floor laughing if they have not already done so previously.

With a simple greeting we are aware of the passage of time.  We easily follow the penguin toward the day's end with his continued observations.  And in a final brilliant technique Jory John brings us full circle.  Here is a single passage.

I'm not buoyant enough.
I sink like a dumb rock.

Can you spot our grumbling individual on the front of the matching dust jacket and book case?  He already stands out in the crowd without uttering a single word.  To the left, on the back, the title and Jory John's and Lane Smith's names are listed covering nearly all the space.  The use of color seen here is continued for most of the book with the exception of some of the landscape, the time of day and other inhabitants.  The differences are suitably subtle.

The opening and closing endpapers are the blackest of black perhaps to indicate the penguin's mood. We get a further inkling of how the book will proceed on the title page. The s in problems has dropped down from the other letters, threatening to fall on the top of the penguin's head.  His eyes are looking up as opposed to straight at the reader like his pals' eyes  do.

The heavier, matte-finished paper enhances the texture seen in the artwork of Lane Smith in this title.  It appears as though the illustrations were created using a blend of traditional mediums and perhaps some digital.  Lane Smith is a master of conveying much with delicate differences.  Perspective plays heavily in his perception of the narrative; a tiny penguin with flippers covering his eyes beneath a large sun in the sky, the gaping mouths of predators in a row as the exhausted penguin climbs from the water, the close-up of the penguin frankly declaring his unfortunate appearance, or the four vertical panels when the penguin seeks his parents.

One of my many favorite pages in the book is when Smith demonstrates the penguin's waddling.  The page is sectioned into fourths with a black line on a white background. In the first three frames penguin is rocking back and forth, left to right, eyes shifting.  In the final image in the bottom right-hand corner, flippers folded in front of his body, he looks straight at the reader proclaiming

If you want hilarity no matter how many times you read a book, Penguin Problems written by Jory John with illustrations by Lane Smith is a marvelous selection.  This first collaboration by John and Smith is a triumph.  There is not a missed beat in this cadence of comedy.

To discover more about Jory John and Lane Smith and their work please visit their websites by following the links attached to their names.  You can view a few interior images at the publisher's website.  Don't miss this funnier than funny interview of Lane Smith at educator and reader advocate Colby Sharp's blog sharpread.  One of my favorite images is included along with the passage noted above.
Posted by Xena's Mom at 9:20 AM